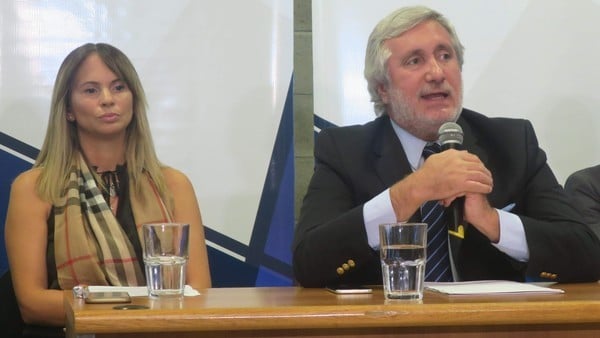 Kirchnerism he redoubled his pressure to ask for his resignation of the attorney general of the province of Buenos Aires, Julio Conte Grand, in the framework of his offensive on Justice.

While the designated Minister of Justice of the Nation, Martín Soria, announced that he will request the resignation of the Attorney General of the Nation, Eduardo Casal, the Provincial Memory Commission (CPM) directed by the Nobel Peace Prize winner Adolfo Pérez Esquivel pointed against Conte Grand.

Before being the head of the Buenos Aires prosecutors, Conte Grande was Legal and Technical Secretary of the former Buenos Aires governor María Eugenia Vidal. The attorney general gave space to prosecutors to investigate multiple causes of corruption such as the fraud against Independiente in which Hugo and Pablo Moyano are involved and the case of La Salada, among others.

The government of Axel Kicillof had already unsuccessfully asked Vidal last year to give him two-thirds of the Buenos Aires Senate to expel Conte Grand. This has already been attacked especially when the CPM promoted, last year, the controversial release of common convicts for the Covid 19 pandemic.

Now the CPM – the same one that accused journalists of illegal espionage in the D’Alessio case and is aligned with the K- raised a note to the Supreme Court of Justice of the province in which he questions Conte Grand.

Consulted sources of the attorney, indicated that they will not comment until the Court decides whether to send the note to a prosecutor or not to initiate an investigation.

“The functional irregularities of the representatives of the public prosecutor’s office of said jurisdiction (Loma) would account for the development of arbitrary and selective investigations by officials of the Unit for the Coordination of Complex Crimes and Organized Crime headed by Sebastián Scalera ”, says the note.

The note conspicuously has paragraphs copied verbatim of a dissenting vote of the former Supreme Court minister, Eduardo de Lazzari, in the suspension of the attorney general of Lomas de Zamora, Enrique Ferrari. Those copies, including spelling errors, show that De Lazzari would be informally advising Kicillof’s management.

When de Lazzari made these complaints last year in the Scalera prosecutor’s office, Conte Grande opened a case and sent it to a lottery. Ended up in the hands of a judge from La Matanza because those of Lomas de Zamora excused themselves.

And the CPM note to the Supreme Court added that “such actions would have entailed the irregular involvement of agents of the Federal Intelligence Agency and the Public Ministry of National Security.”

The CPM also relied on accusations by Judge Gabriel Vitali who questioned Scalera’s activity in the Independiente and La Salada cases. Vitali, in turn, two cases opened against him.

Prosecutor Scalera also intervened in the challenge of Judge Carzoglio in the Independiente case. Judge Vitali accused Scalera of initiating investigations “with the aim of inclining them to his political interests or generating IPP in order to persecute politicians, trade unionists, magistrates and officials, among others where officials of the Federal Investigation Agency have participated in a manner as less irregular in line with what was denounced by different magistrates of Lomas de Zamora such as doctors (Luis) Carzoglio and (Gabriel) Vitale ”.

In a related cause The Moyano lawyer, Daniel Llermanos, is charged with instigating a detainee to make a false complaint against Scalera.

The note is signed by Esquivel, Dora Barrancos and the secretary of the CPM and the “brain” of the organization Roberto Cipriano García. Esquivel openly supported the candidacies of the Frente de Todos.

Specifically, it was requested from the Supreme Court of Justice: “To submit a detailed report in relation to the actions deployed by that SCJBA and the Attorney General regarding the different presentations made by the Judge of Guarantees of Lomas de Zamora Gabriel Vitali.”

Reporters – South of Hebron, in the foothills of the West Bank, two worlds coexist uncomfortably side by side