Kiko Olivas: “When you are off the field you suffer much more” 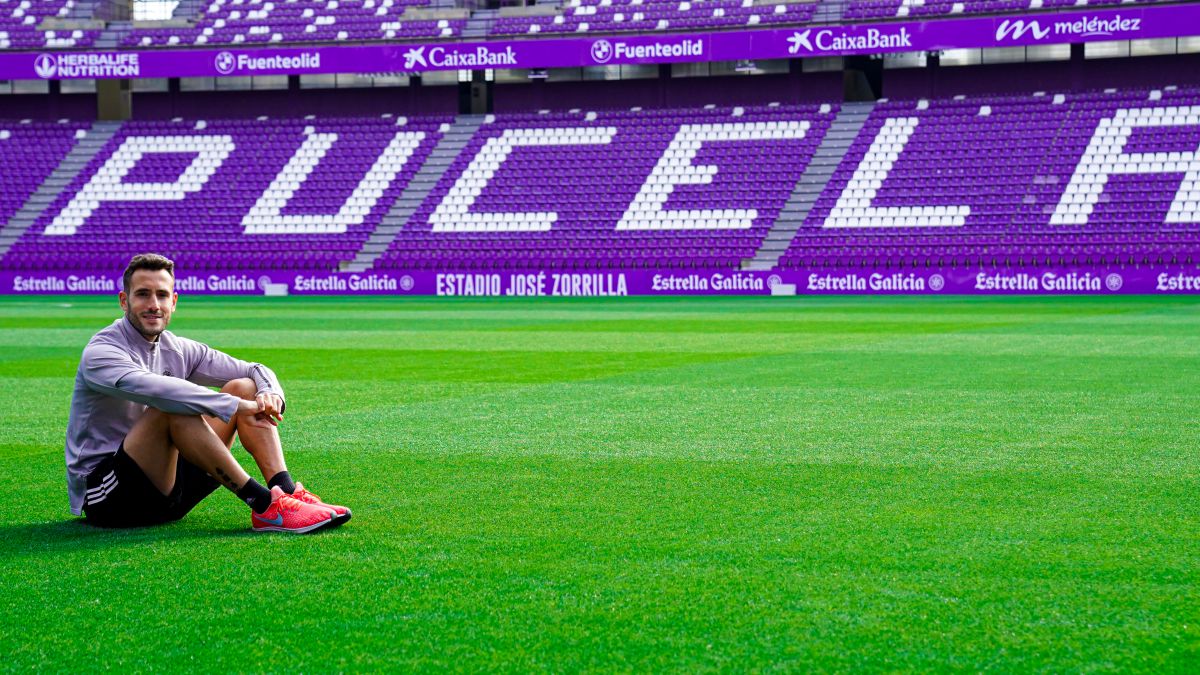 The Andalusian central Real Valladolid is already training with the group after nine months of injury, spending much of the season in the dry dock since he destroyed his knee on that curb in Ipurua.

You have been training with the group for several weeks now, how are you feeling?

I feel good, I am doing the entire sessions with the group, I am adjusting well to everything, although it is also true that I lack a bit of rhythm. I am a bit lacking in the specific movements that are caught with the games, but I am happy with how the knee responds.

The League ends on May 22, will you have time to play?

I think so. I have completed several weeks of normal training. I’m like one of the squad, I’m feeling well and now it’s just a matter of that when the coach sees me fit, because he’s the one who decides, he’ll put me on call and I’ll be available to help the team.

Dare to set a date to play again?

The team has five centers, and yet there have been games where only one was available. Has that question pressured you to try to come back sooner?

The truth is that the situation this year has been peculiar in that position. I started, but there were players available and the situations have not arisen so that they can perform and that they can fully count on them. And we had to do what we could this season, but we had a recovery period, we have worked on it without thinking about what was happening. The circumstances are what they are and I was thinking of being available as soon as possible to help the team achieve the goal, so these last weeks we are pushing hard.

How many times have you thought about that curb in Ipurua?

I have not given much thought to that. These are things that happen in football. I have focused on the recovery, on the return rather than on the accident itself.

Did you know that days after what happened to you that curb was removed?

I am glad that the ideal conditions are in place for the players to be safe and to try to avoid serious injuries like the one I suffered. As long as there are measures to prevent these accidents from happening, the better.

What was the worst moment?

The moment of knowing the news, I was hoping that it was not so serious, but knowing the extent of the injury, the time it takes, was hard, with the circumstances that occurred, when everything was calm, enjoying. It was screwed up. And also the beginning. I felt very helpless not being able to do anything. I couldn’t move my leg, I didn’t feel it and I don’t like depending on a lot of people who were watching out for me. They were hard moments, of pain, which increased with that feeling of incapacity.

Among the positive things, at least, he has been able to enjoy his family a lot …

It is true, there are many positive things. Maybe when you are at full capacity, focused on the games, we do not realize it. I have had this time, I have been able to enjoy it, I am a very familiar person and since I do not have to travel, especially on weekends, I have spent a lot of time with the family, with the children. It has been something very positive and to take into account. I have also been able to know other aspects of football that I did not know. Many people around us, at the club, who are fundamental because without them we would not see the performance we have and what is seen from the outside.

How do you see the team from the outside?

This year I suffer a lot because when you are away you suffer much more. When you are inside you see it differently. I think that in three or four games if we had been correct in one play, we would not have failed or simply we would have been a bit lucky because we would see everything differently, but that has not happened. From there we have to save the season whatever it takes. That is the goal. And, later, assess what has not gone well this season because we, at the beginning it is clear that we had another idea, there were moments that it seemed that it could be like that, but mistakes, errors or not being in a good last play, without luck, Well, it makes us where we are in the rankings. What remains for us in these eight games is to learn from what we have done wrong this season and take it out.

Do you think there is a better team this season? Because last season, for example, the team was not in decline.

Other seasons it seemed that we did not have such a complete squad, with as much competition as there may be now, but between all of us, squad, club, fans, we managed to bring the issue forward. And this year with a very complete staff, very competitive in all positions, it seemed that we were not going to suffer so much, but the lack of confidence, so many hard blows that we have taken, not being able to count on many colleagues due to illness or injuries It has been affecting us a lot, it has undermined us a lot and the idea that we had at the beginning of the season has not been given.

You did not have a good first year in Valladolid, with Luis César, but then you had a great playoff and were at a great level the following two seasons in Primera, alongside Calero and Salisu, the two most expensive sales of the club …

It is true that the first season did not go well, I was late, I could not do preseason, I could not acclimatize quickly to the teammates, to the club, and that dragged him the rest of the season. The lack of confidence was undermining me to not reach the level that I wanted. The truth is that Sergio’s arrival was a click both in me and in the whole team and, luckily, we got that performance that was presumed. Thank God, I reached that level and I was able to give it in the following two years and if I could help my teammates to improve and the club to have an income, then I feel satisfied. I came to work, to show what I can do in a field and to help.

Have you asked for a proportional part of the transfer of your former colleagues?

(Laughs) No, but it should. Many people tell me, but I always say that the merit is exclusive to them because they have the level and the ability to do well, both Calero and Salisu, and I was by their side, I had to be their companion, proud of being it, and he had to help them with any deficiencies they might have. It’s funny, many tell me, that I could have taken something, that it never hurts.

You always miss someone who is not there, but they have told you hundreds of times in these months, right?

The truth is that I am happy because I have felt the support of the people and the truth is that in my situation, having a really bad time, because going down the street walking with the family and having people tell you, encourages you a lot. I am very happy for this support because it is fundamental and essential for me. I understand that this longing is for everything there was, not only for me, but I remain with the affection of the people and for me it is a pride that the people of Valladolid support me in this complicated situation.

The agreement turns into investment in the “Diamond Jubilee”