Kiev has put forward a new ultimatum on Donbass 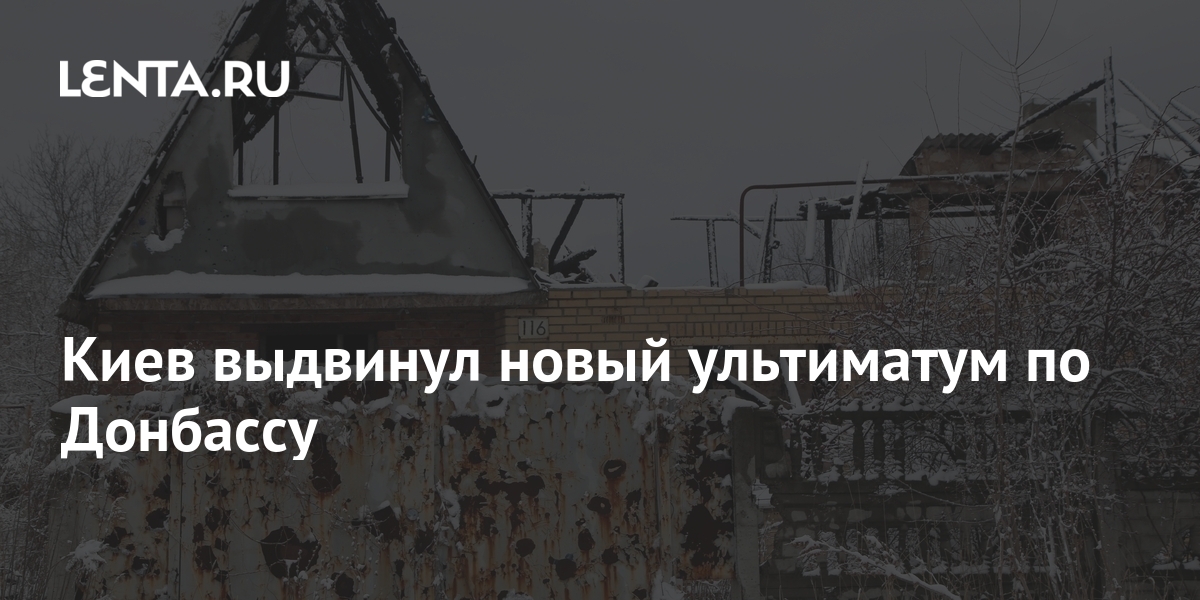 Denis Kazansky, a member of the Ukrainian delegation to the Trilateral Contact Group (TCG), has put forward a new ultimatum on Donbass. He stated on the air of the TV channel “OUR”That the negotiation process was blocked due to the presence of a representative from the self-proclaimed Donetsk People’s Republic Maya Pirogova.

Kazansky stressed that since the 2000s, Pirogova has repeatedly come to the attention of law enforcement agencies for fraud and economic crimes, and after 2014 she was convicted of terrorism.

This is the position of the Ukrainian delegation, which clearly stated that Ukraine will not negotiate as long as there is this person. She is brought in for provocations. Our position is very simple: we say that negotiations will continue when they stop bringing it up.

A similar ultimatum was put forward in April 2021 by the head of the Ukrainian delegation to the Trilateral Contact Group (TCG) Leonid Kravchuk. According to him, he turned to the moderator of the OSCE talks, Heidi Grau, with a demand to exclude the representative of the self-proclaimed Donetsk Republic (DPR) Maya Pirogova from the political subgroup.

Earlier, the Organization for Security and Cooperation in Europe (OSCE) called on all parties to the conflict in Donbass to stop shelling and other provocations along the contact line. This was stated by the Special Representative of the OSCE Chairperson in Ukraine and in the TCG Heidi Grau. She called both sides of the conflict guilty of aggravating the situation. According to her, violations of the ceasefire by Ukraine and the Donbass republics threaten the safety of local residents.

Ruslan Bortnik, director of the Ukrainian Institute of Politics, said that Ukraine does not have a policy as such with regard to Donbass and ways to resolve the conflict in the east of the country.

Today we do not have a policy regarding Donbass. Because we do not resolve the political conflict and do not freeze it. We’re just going with the flow

According to him, the negotiation process cannot begin in many cases, since the countries do not recognize each other’s powers. The political scientist stressed that the military is closely watching this, and when the rhetoric becomes sharper, and there are still no negotiations, they use weapons more freely.

On July 6, the LPR authorities accused the Ukrainian Armed Forces of shelling the Donetsk settlement with prohibited weapons. The shelling began on the evening of July 7 and was conducted from 120-mm mortars. In total, 10 mines were fired at the village, one of them seriously wounded a 61-year-old pensioner during the explosion.

Earlier it was reported that the Ukrainian military fired at Gorlovka and Donetsk. 24 mines with a caliber of 120 millimeters were fired at residential areas and industrial facilities, LNG grenade launchers and small arms were also used.

Bortnik also said that if the Western partners decide to “give” Ukraine to Russia, they will provide the country with a NATO Membership Action Plan (MAP), since after this hostilities will begin again in the east and the state will begin to “crumble”.

That is, it will simply be an opportunity, a formal reason for Russia to use its armed forces in order to protect its citizens, of whom there are already 600 thousand, and soon there will be several million living in Donetsk and Lugansk.

According to the political scientist, NATO in its entire history has never once proved its ability to protect its members.
Earlier, Ukrainian Foreign Minister Dmitry Kuleba said that the country wants to receive an “honest answer” about the timing of joining NATO.

Deputy Prime Minister for the Reintegration of the Temporarily Occupied Territories of Ukraine Oleksiy Reznikov predicted that the country will join the North Atlantic Alliance when it will be an equal partner for its members. He added that this will happen when Kiev realizes that the experience of the Ukrainian army will be important for Western countries.

The Ministry of Health records 991 new cases of corona