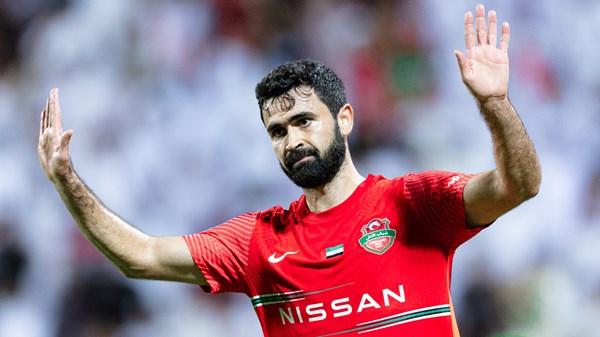 Omar Khirbin, Al-Ahly youth striker, scored his first goal this season against Al-Wahda, in the third round of the “ADNOC Professional League”, which ended with the victory of “Al Fursan” 2-1, but Kharbin refused to celebrate with his colleagues the goal, out of respect for his former team, especially as he moved to “Al Fursan” for a season on loan.
Khirbin’s behavior was similar to that of the Norwegian Erling Haaland, the Manchester City striker, who refused to celebrate his goal against his former team, Borussia Dortmund, in the match that brought them together in the second round of the group stage of the Champions League, and Haaland scored the second City goal and victory in the 84th minute. He did not celebrate and raised his hand to his colleagues to confirm that he refused to celebrate, which is what Kharbin did.
Khirbin joined Al Wahda from Saudi Al Hilal in January 2021, and scored 8 goals with him in half a season. Last season, he scored 15 goals. He previously played for Al Dhafra for two seasons, where he scored 9 goals in 12 matches, during the 2015-2016 season, and 8 goals. In 14 games during the 2016-2017 season, the number of his goals so far reached 41 goals in 5601 minutes in 63 matches with 3 clubs.