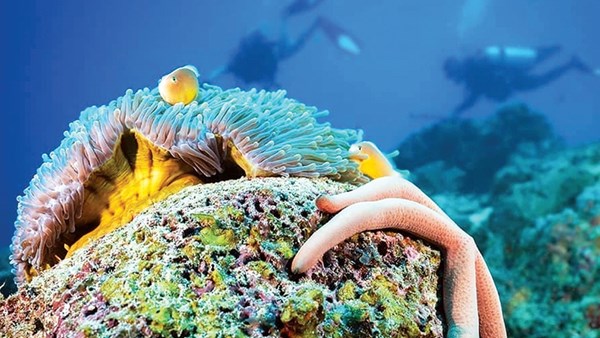 Despite all aspects of urban and civilized development, the sea remains a source of passion for many interested in documenting nature through the photograph, taking the relationship of the people of the Gulf with the waves and “the sword” as a legacy of creativity and a belief in the visual language in its ability to spot treasures meters away from underwater. Khaled Al Hosani, the photographer, and his love for the world of underwater photography pushed him to do more than 350 dives, as the marine nature seduced him with its magic, and he found it worthy of documentation to reveal the secrets of the depths.

Al Hosani, who recently won the annual competition organized by the Emirates Diving Association entitled “My Number Online 2021”, won first place in the “Photo” category, and second place in the “Video” category, with the participation of more than 100 underwater photography enthusiasts: “.. the underwater image It makes me more inspired, as there are small fish, corals and coral reefs, all of which are worlds from which the photographer draws several ideas, but rather a special outlet to achieve inner entertainment..” Here Al-Hosani explains the impact of these images on his thinking and psyche, adding that he is working to integrate these images through Producing special videos supported by music that he is keen to choose, and then publishing them on his “Instagram” website.

He added: “The aquatic environment in the diving sites is full of wonderfully beautiful marine creatures, and the photographer is the one who transmits this beauty from under the water through his lenses,” adding: “Underwater photography has different standards than the common photography, due to the surrounding water conditions such as planning the picture is one of the most important The reasons for its success, and choosing the right time to take it, especially in outdoor photos, also choosing the right lenses, as there is a difference between the micro lens and the nature lens and portrait, and the angle of taking pictures greatly affects its distinction, in addition to its saturated and pure pots.” He says: “What arouses curiosity and passion for marine creatures is that they have a different society from ours and different conditions. These creatures live by different laws in exceptional circumstances, and pursue different and strange life paths that attract us to this mysterious world.”

gills bare
About the picture he took of “the gill bare,” he says: “These microorganisms are characterized by their small size, but they are in fact very beautiful. Pointing out that the “video”, which won second place, lists the depiction of the underwater world of marine life in all its details and the indescribable beauty, as the beauty of the bottom cannot be translated by visual language through snapshots, and the tongue is unable to describe the aesthetic secrets at the bottom, and it cannot be explained This beauty lives and is seen only by those who dive and discover the secrets of life under water.

awards
Al Hosani shows that it is not the first time he has won this competition, but rather he won many victories, as in 2018 he won the silver for the most beautiful picture in the UAE, and in 2019 he won the “bronze” in the “accurate photography and video silver” category, and in 2020 the “silver”. In the “black and white” category, and in 2021, the gold for photos and second place in the video category.