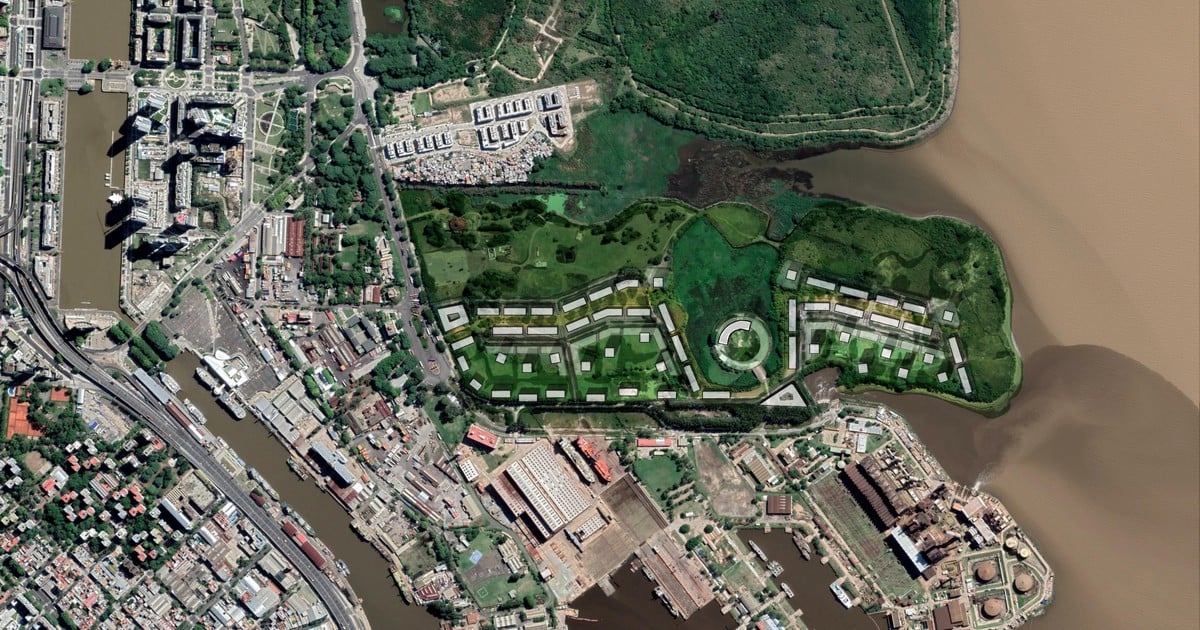 The project to create a neighborhood and a public park in the former Sports City of Boca Juniors, on the Costanera Sur, took this Thursday a fundamental step. The Buenos Aires Legislature approved “in first reading” the agreement that the Buenos Aires government signed with the company IRSA, owner of the property, to carry out the urbanization.

The initiative was endorsed by 37 votes in favor and 20 against. As it is a modification to the Urban Code, a public hearing must now be held (mandatory but not binding), and a second vote on the premises for its final sanction.

It is an urban project to give a destination to the former Sports City, the land reclaimed from the river where the Boca Juniors club wanted to build a complex of pools, tennis courts and other facilities, but mainly to build a covered stadium for 100,000 people.

A simulated image of what Costa Urbana would be like.

Only some parts of that initiative were materialized, plus an amusement park, because the successive economic crises in the country damaged the club and prevented the work from continuing.

Thus, in the mid-1980s the property was abandoned. In 1991 it was sold to a company, Santa María del Plata, and in 1997 IRSA bought it. But for more than 30 years that the former Sports City is in disuse and without access for anyone.

Why? Because in all this time the Legislature was never able to approve any of the urbanization projects that were presented by the private developer.

This would be the urbanization of the former Sports City of Boca Juniors.

That knot was recently untied. On July 6, the City’s Department of Urban Development confirmed that it had closed a urban agreement with IRSA and that he was going to send it to the Legislature for approval.

The project, now renamed “Urban Coast”, raises two questions. Of the total of 71 hectares of the property, in 24.6 a neighborhood will be developed. There will be a central sector with buildings of 6 to 10 floors, destined to houses, shops, gastronomic places, sanatoriums, educational institutions and other uses.

This area will have a pedestrian corridor that will lead to a water body fed by the Río de la Plata itself, which will also function as a walkway and will be surrounded by some buildings.

In the southernmost strip, the construction of towers will be allowed, in more separate blocks. In addition, the streets will be opened to connect the neighborhood with Spain Avenue, towards the Demarchi Island side. In the neighborhood about 6,000 families could live.

But most of the land, 47 hectares, will be donated by the company to set up a large public park, with a 4.8-kilometer coastal walk and bike paths, which will allow the City to add a green space and regain direct contact with the river, with a free ride for neighbors.

This is how the former Boca Juniors Sports City is today, in Costanera Sur. Photo: Rafael Mario Quinteros.

In addition to the land, the company undertook to take care of the maintenance of the park for 10 years and to put money in a fund for investments in infrastructure that the Buenos Aires Government decides in other sectors of the City, for example to recover the Central Area, very deteriorated for the coronavirus pandemic and quarantine.

The total investment will be around, according to IRSA, $ 1.8 billion, and about 10,000 direct jobs would be generated, in a building development that would be completed in about 20 years.

This is, broadly speaking, what was approved by the Legislature. Not without rejections: the Kirchnerist bloc and the left demonstrated against of the initiative, because they understand that it is an advance of the construction of towers on the green space.

The old facilities of the former Sports City that are still standing. Photo: Rafael Mario Quinteros

In fact, the original idea of ​​the ruling party was to approve the first reading in the session of Thursday 5. But it could not do so because a judge in the Contentious Administrative of the City, Guillermo Scheibler, signed a precautionary measure at the request of several NGOs, with which prevented legislative debateThe argument was that, so far, the project has not been accompanied by an environmental impact study.

It was a controversial and unprecedented decision, because a ruling by a judge was preventing not the application but directly the treatment of a bill, which for many consisted of an interference by the Judicial Power over the Legislative.

This situation was modified because another Buenos Aires judge of the same jurisdiction, Aurelio Ammirato, revoked the precautionary measure and thus released the treatment in the City Legislature.