Kesen, the small town in Japan wiped off the map by the tsunami that one of its inhabitants is determined to rebuild 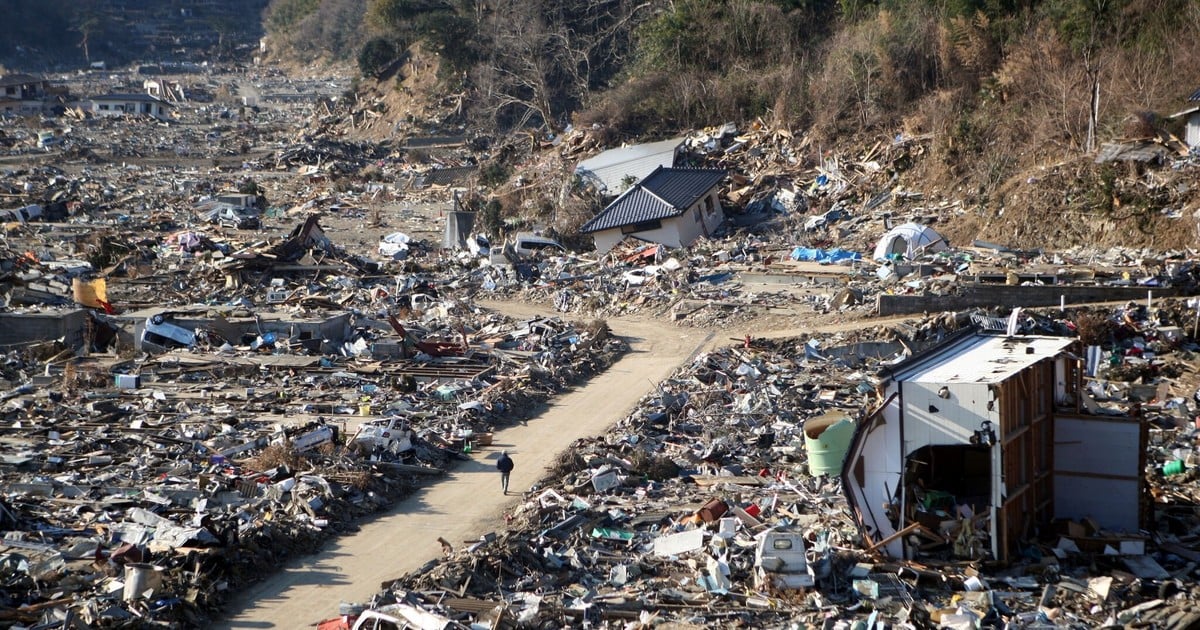 Then the wave came. Time stopped. And the town became history.

When a catastrophic earthquake and tsunami hit the coast of Japan on March 11, 2011, more than 200 inhabitants of the village of Kesen died, in Iwate prefecture. All but two of the houses were destroyed.

When the waters receded, almost all who survived fled. They left behind their destroyed possessions, the graves of their ancestors, and the land their ancestors had cultivated for generations.

March 2021. The view from the Takata Matsubara Tsunami Reconstruction Memorial Park in Kesen, on the 10th anniversary of the earthquake. Photo: Hiroko Masuike / The New York Times

But fifteen residents refused to leave Kesen and they promised to rebuild it. Twice a year since 2011, Hiroko Masuike, a photographer for The New York Times, visits the village to document the survivors’ near-impossible mission to rebuild their hometown.

“Our ancestors lived in this town a thousand years ago”says Naoshi Sato, 87, a lumberjack and farmer whose son was killed in the tsunami. “Then there were also disasters. Every time the inhabitants stayed. They rebuilt and stayed. They rebuilt and stayed. I feel the obligation to continue what my ancestors started. I don’t want to lose my hometown.”

Many of those who stayed, including Sato, they lived for months without electricity or running water. For a year, Sato camped in the fetid remains of his home. For a decade, he has been dreaming of Kesen’s rebirth.

Every day of that first year after the tsunami, he walked into the forest and, with his bare hands, he cut down trees that he used to rebuild his two-bedroom house. When only two other families followed suit and rebuilt their homes, Sato’s wife and daughter-in-law realized the futility of their plan and abandoned it.

Those who decided to stay in Kesen were old in 2011. Now, at 70, 80 and 90 years old, they are even older. Little by little, over the last decade, a grim reality settled in the place: there is no way back. Kesen will never be restored. This emptiness will last forever.

Sato resigns himself that his mission is useless. Three houses have been built and he has prevented his old neighbor’s farmland from deteriorating, but he acknowledges that without new residents, the village will die.

The old Japanese village of Kesen, April 2011. A month after the earthquake, Naoshi Sato, a lumberjack from Kesen, encouraged locals to stay. Photo: Hiroko Masuike / The New York Times

Blame the government. It took nine years and $ 840 million for the government to finish a project in which the highlands above the town were converted into land for the construction of houses.

By then, he says, it was too late. Almost everyone who left a decade ago has found a new home elsewhere. Unlike other nearby towns within the city of Rikuzentakata, which have also received government funding, the new elevated area of ​​the town destroyed it lacks services such as shops and a supermarket.

“Now, in view of the coronavirus pandemic, it is fortunate to live here,” Sato said. To make sure his irony was understood, he added: “The air is clean and there are not too many people.”

In the highlands, a handful of newly built houses have sprung up around the Kongoji temple. Like the mythical Ship of Theseus, whose pieces were replaced over time, Kongoji is at the same time the same temple that has been in the community for 1,200 years and a brand new one built in 2017.

October 2015. Buddhist monks from all over Japan visited the site where the new Kongoji Temple was to be built. Photo: Hiroko Masuike / The New York Times

For centuries, the temple has served as a community calendar, marking time with 33 events a year. Those rites have been stopped, but on Thursday, Nobuo Kobayashi, the head monk of Kongoji, Kesen welcomed the scattered members of the community to hold a memorial ceremony.

Kobayashi has worked tirelessly to make sure families have a place to mourn your loved onesBut he is realistic about the possibility of the temple resounding with sounds other than wailing.

“Of course, I would like to rebuild the kind of temple we had before the tsunami,” Kobayashi said. “But people don’t want to go back to the place where they lost their friends and family. And there is fear; people fear another tsunami. “

An anniversary is an arbitrary but useful reminder of how time passes. Ten years is a pleasantly round number, but it is just one of many numbers by which tragedy is measured.

A decade seems like an eternity to those who lost a child in a matter of seconds, but it is a brief moment in Japanese history. It’s an even shorter blink in the billion-year history of plate tectonics, whose sudden changes triggered the earthquake and tsunami.

It is that long vision of history that gives those who resist hope that Kesen will rise again from the rubble.

Sato, the woodcutter, will soon be 88 years old. He wakes up every morning at 6 a.m. and places a cup of green tea on the altar in his home, an offering to the spirits of his son and his ancestors. And then, like his ancestors, he takes care of his rice field and his garden.

“I would like to see what this place will be like in 30 years”, He says. “But by then, I’ll have to see it from the sky. And I don’t think that’s possible.”

More than 1,800 prisoners escaped from a prison in Nigeria