Kentucky tornado victims: “My home, my business, I watched my whole life disappear in an instant” 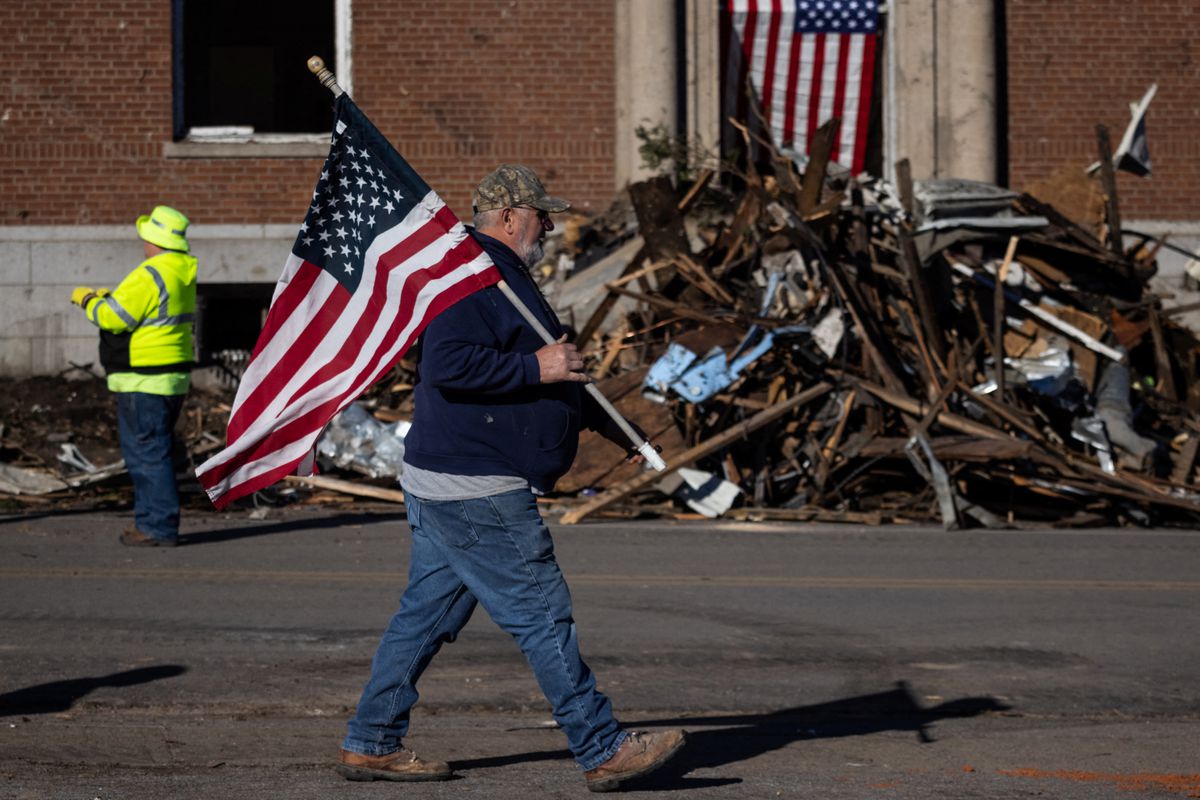 After the tornado, the calm arrived. Mayfield dawned this Sunday with a splendid winter sun ahead, as if nature hid the hand with which it struck this town of 10,000 inhabitants on the western tip of Kentucky on Friday night with excessive fury and capricious mercy. It is ground zero for the devastation caused by a historic series of 30 tornadoes that swept through rural areas of six central and southern states of the country, causing more than 90 deaths.

But there was the evidence of destruction: the Red Cross sign twisted in on itself, an American flag perched on a jumble of metal that was once a van, a single-family home literally pushed into the ground by the wind. the middle of the road, that apple-colored 1950s Chevrolet that defied gravity amid the rubble of a workshop … and a completely razed candle factory that has already become the symbol of a natural catastrophe that has the nation in suspense . It is estimated that dozens of people died, it is not clear how many, although since Saturday afternoon no survivors have been found. Some 110 workers were inside at the time of the tragedy; they were doubling shift before the weekend so they could take care of all the Christmas orders.

In addition to Kentucky, five other states, Illinois (where six people lost their lives in an Amazon warehouse in Edwardsville), Tennessee, Mississippi, Arkansas and Missouri were affected by an unprecedented series of storms. The number of victims amounted to more than ninety people this Sunday, although the governor of Kentucky, Andy Beshear, it was feared that there were more than a hundred dead. Beshear has expressed concern that the region’s morgues “will remain small” in the face of the magnitude of the tragedy.

Some 53,000 of his fellow citizens, according to Poweroutrage.us, they’ve been without power all weekend after the power line was seriously damaged. One of the tornadoes, “the strongest in the history of the United States,” said Beshear on Sunday afternoon, paraded in its black silhouette for almost 400 kilometers and swept through downtown Mayfield, the church, the courthouse, the store. of tires and dozens of houses.

In front of one of them, the young Etelvina Aguilar could not contain the crying first thing in the morning when she remembered what happened two nights ago. Guatemalan, she came to town four and a half months ago, where she set up a business of Latin products. As the money was not enough, the family, with the two small children, lived on the second floor of the store. On Friday they lost everything. “There had been other notices like this one, but luckily, I had a hunch and made the children go down. We hid behind a column, which saved our lives. It was a matter of five minutes. The baby screamed non-stop. And now look: my house, my business, I saw everything disappear in an instant ”, he says in front of the pile of rubble from his previous life. The couple had not had time to secure the property. “So we have nothing, just debts.”

Nearby, mounted in a black truck, 60-year-old chef CE Mines was patrolling, also with tears in his eyes, the downtown streets. On Friday he spoke to his wife, who was at the doctor, when the terrible shaking began. “We spent that night apart, and yesterday we finally met. I can’t say the same for my neighbors. I have no way of knowing if they are alive. This close-knit community has been decimated. ”

A little later, Tommy Anderson, a 64-year-old engineer, moved wistfully among the wreckage of his particular shipwreck. “I have not yet dared to venture inside the house, but it does not matter, because I would have nowhere to take what has survived, like our beloved piano; There is no storage available in the area, ”he explained to the home he shared with his wife and his son’s family. Luckily, they all managed to take refuge in the basement.

Anderson has managed to secure at least one motel near Mayfield, the reservation of which he renews day by day. Other survivors have been taken in by family and friends. Three shelters have been set up in the area, and a place where families can provide evidence, such as personal effects, to identify loved ones whose tracks have been lost.

In the area of ​​the candle factory, today a site full of a plateau of debris, rescuers and forensics worked piecemeal. The vehicular access was cut off by several patrols of the military police. One of his agents asked the curious not to interfere with the location and identification of the corpses. “There is still a lot to do there.”

Even for those who have survived and their houses are reasonably standing, existence has become hell in this sleepy Kentucky town, whose slogan, “more than a memory,” sounded today, painted on a white wall that has miraculously stood standing the main street, like a practical joke. There is no electricity or running water, and Regional Police Officer Sarah Burgess, with jurisdiction over 11 counties, five of which have borne the brunt of Friday’s storms, fears none of those basic services will return. “At least until next weekend.” As if that weren’t enough, temperatures have plummeted in Mayfield, where it froze on Saturday night.

Burgess explains that they are overwhelmed by the number of people who have come forward to help the survivors. People like the volunteers of the NGO Aerial Recovery, who, arrived the day before from Nashville, in neighboring Tennessee, had to sleep inside their cars, like the Spanish chef José Andrés, who traveled on Saturday night to giving free meals to those affected, or like Bobby Truffen, who had risen early to fill his truck to the brim with food and beverages that he was offering to crane operators who were moving huge pieces of metal bent like paper. None of them, police, firefighters or volunteers, had time to spare: the authorities have decreed a curfew from sunset, certainly early this time of year, until dawn.

Other neighbors flocked to the Catalyst church, where the priest Justin Carrico ordered the traffic of donations: cereals, clothes, juices and even a pile of Bibles. At one of the tables in the makeshift shelter, an older couple, Tim and Jenny, were staring blankly at pizza for breakfast. Their house did not suffer too much, but they have neither water nor electricity and they had spent the night “with all the clothes they had on to cope with the cold.” “I have a phone passed to me from a guy named Errol who has a generator and lets people shower at his house,” whispers Jenny. “If you need a shower, write it down, but don’t give it away.”

At the institute on the outskirts of Mayfield, scenes like that were repeated between the comings and goings of the members of the rescue corps, with the weariness drawn on their faces. Many of those who lost their homes spent their first night here, when the heat hadn’t quite subsided. “Yesterday we were relocating them in different places,” clarifies Billy Edwards, director of a center that teaches 530 students, in the center of the Mayfield Cardinals basketball court, now converted into a rescue site. The lack of electricity added drama to the empty, dim stadium.

At noon, a few neighbors had decided to celebrate a mass with a few folding chairs where the Baptist Church of Yahweh was located. Among them, Arthur Bryn wept when he remembered that in that temple that the tornado took away he attended the wedding of his three daughters. “I am seventy years old, and I have always lived here. The worst days of my life have been those I have spent away from Mayfield. Up to now. This surpasses it all ”, he said hugging his wife.

Beshear: “I don’t expect any more survivors at the candle factory”

The Democratic Governor of Kentucky, Andy Beshear, this weekend has become the most visible face of the management of the natural disaster, which has taken the lives of more than 90 people in Kentucky, the most affected, and in four other states: Illinois, Tennessee, Arkansas, and Missouri.

Beshear warned from the first moments that the number could exceed 100 victims and put the focus of the tragedy in a candle factory called Mayfield Consumer Products, which had 110 workers at the time of the collapse. “I do not think we will find more survivors there,” said Beshear, who on Sunday morning defined the consequences of the series of storms as “the greatest devastation that any of us have seen in our lives.”

Adding to the grief over the loss of his compatriots is the fact that Beshear’s father, also a Democratic politician, Steve Beshear, 77, who was governor of Kentucky between 2007 and 2015, is a native of Dawson Springs, one of the counties hardest hit by destruction from tornadoes that capriciously tore through parts of the region Friday night.