Keiko Fujimori: “I will accept the result of the electoral tribunal” 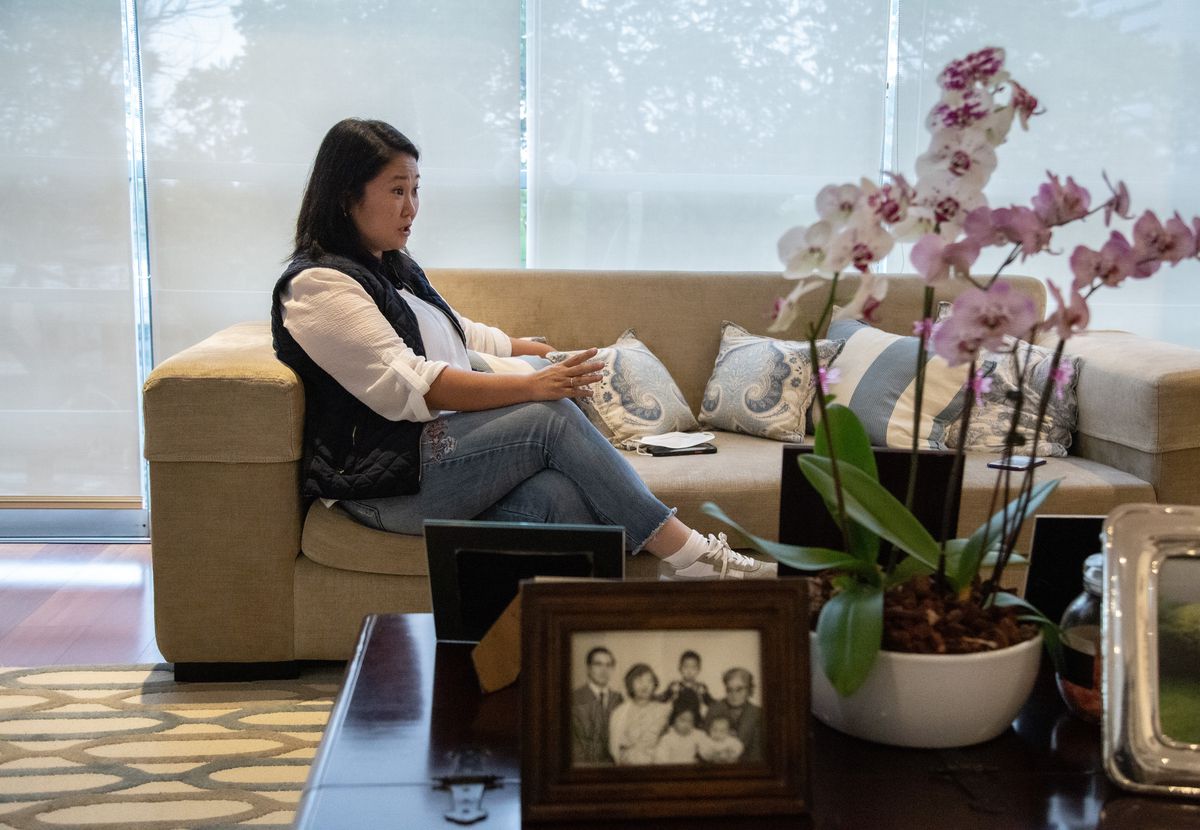 The elevator of the building goes directly to the living room of the apartment. The dirty sky of Lima can be seen through a large window. Keiko Fujimori, 46, waits there, dressed in a white chiffon shirt, a padded sleeveless vest and flowered jeans. Peruvian politics has shown during the electoral campaign one of its great strengths, that of bringing together the Peruvian elites, who gave it their full support to govern the country for the next five years. But also some of its weaknesses and contradictions. Fujimori, accused of money laundering and criminal organization in the Odebrecht case, promised to fight corruption. On an altar surrounded by Catholic figures the size of nursery children, sits the Bible he read while in prison. “Whatever the result, I will respect the popular will,” he said before going to the polls. Two weeks later, he continues without recognizing the victory by the minimum of his adversary, the leftist Pedro Castillo. The candidate assured that, with her in power, the stability of a faltering democracy in the last five years would be strengthened. On a wooden picture frame there is a black and white photo of her as a child with her mother, her two little brothers and a man in a suit and plastic glasses, her father, Alberto Fujimori. The last autocrat of Peru.

The decision by Fujimori and his party, Fuerza Popular, to try to nullify 200,000 votes in the poorest areas of the country, where his rival has swept away, has delayed the proclamation of a winner by two weeks. Castillo won, according to the official count, by just over 40,000 ballots. The wait has strained coexistence after a high intensity campaign that has divided the country. Fujimori and his allies say they are convinced that there was a fraud that altered the final result, despite the fact that institutions and international observers have seen no indication that this was the case. On Keiko’s side are the best law firms in Lima, which are the ones that have filed the annulments. For now, they have all been rejected. Ex-military associations have called for a coup to prevent Castillo from coming to power, which for this sector represents a fierce and outdated communism.

The question remained as to whether Fujimori would finally do what he promised in the campaign, accept the result or choose another route. “I will accept the results that the National Elections Jury decides,” she clarifies sitting on a three-piece sofa. However, he slides that not enough may be being done to know “the truth.” His team had three days from the Sunday of the elections, June 6, to present the motions for annulment, but the majority arrived after the deadline. There is a legal discussion right now – very common in Peru – about whether these should be considered. “We ask the Jury not to give us an excuse with the issue of the deadline, if what is sought is to know the truth. If there were the will to know the truth … ”, he continues.

– Do you think there is no will?

– I’m not going to pronounce myself until I hear the final decision.

– I read you a phrase said by you on June 6: “From now on I can say that whatever the result, I will respect the popular will, as it should be.”

– Of course. And I confirm that.

Fujimori’s face darkens when he is read about what the leading experts have said about it. Alfredo Torres, president of Ipsos Peru, the pollster: “In the database we have found no evidence of fraud systematic”. The Defensoría: “We affirm categorically that no attempt to alter the popular will has been noticed.” OAS report: “The mission has not detected serious irregularities.” The candidate, who ran for the presidency for the third time in a row, says that she does not question the entire system, but 800 tables in which she says irregularities have been detected. Like that several relatives were in charge of a voting table, something prohibited by law. His party published names and surnames of specific citizens. They came out to deny it and explain something that happens in many rural areas of Peru: many people share the same surname.

In the campaign, Keiko approached some of her historical enemies, such as the Vargas Llosas, who preferred her as an option. The rural professor Castillo, with his discourse against the elites and the free market, which he has now modulated and in some cases rectified, represented for them a leap into the void. Both candidates, faced with doubts about what their behavior would be once seated in the presidential chair, signed democratic commitments. Fujimori apologized to ministers and presidents who had been dismissed by the last legislature using their majority in Congress. It seemed that his attitude towards this new process was different. However, does not delving into that instability mean raising suspicions of fraud on your rival?

-Unlike. I have recognized that in the last election, if something was missing, it was to ask for a recount (he lost by a similar amount to Pedro Pablo Kuczynski and he always believed that it was also a fraud). Today I am asking that certain tables be analyzed. This type of analysis will make all Peruvians accept the results better. Looking to the next five years, I think this is much better and gives strength to democracy.

At a press conference, he appeared with Miguel Torres, one of his spokesmen. The prosecutor instructing his case asked that Fujimori return to prison for violating probation. In theory he could not be seen with Torres, also involved. This Monday there is a court hearing to study the petition. “I have always put myself at the disposal of justice and that is why I have been in prison three times. (…) The argument of this fourth request for preventive detention is absolutely absurd. We have been working for many months (with Torres), this request is presented the day we present the annulment requests ”, he explains. Torres is at the back of the room, distracted by his cell phone.

She has received many votes. A good part in opposition to Castillo (between the two they did not get more than 30% in the first round) in urban areas and on the coast. But the rejection is absolute in rural areas and in the south of the country. There antifujimorismo is almost a religion. “It can also be in some cases in reference to me. But as in any democracy (I will try to convince them) with a lot of tolerance and respect, beyond their position, their ideology, that they feel part of a State, a State that is failed, with deaths from covid ”, he acknowledges. Peru, by ratio, is the country with the most deaths in the world during the pandemic, more than 180,000.

Fujimori has not changed some of his more radical positions in the trip to the center that he undertook to attract voters who might feel threatened by Castillo.

– Our position in defense of life and family is very strong.

– Against abortion and homosexual marriage.

Fujimori has been changing his opinion about the pardon of his father. She became first lady after the breakup of her parents’ marriage. I was only 18 years old. In 2011 he said he would forgive him. In 2016, no, that he would respect the sentence for corruption and violation of human rights. Now he has returned to assure that he will pardon him. Are you still in that position? “Yes”. Nobel Prize winner Mario Vargas Llosa explicitly asked him not to grant it to Alberto’s right-hand man, Vladimiro Montesinos, locked up for similar reasons.

With the campaign and therefore the propaganda over, do you consider your rival to be a danger to democracy? “I believe that his ideals and his proposals harm our democracy, he has very radical positions.”

The noise of sabers has returned to Peru, a nation that until the 1980s had had more military governments than civilians. Commands in the reserve have published coup proclamations, rejected by the Ministry of Defense. Still, the smell of sulfur lingers in the air. “I think we should all be calm. I have no relationship with them and I believe that what corresponds to me at the moment is to keep my spirits prudent, “he says.

In the last three years, Fujimori has done two half ‘Ironman’ (swimming 2 kilometers, cycling 90 and running 21). That spirit drives him into politics.

– This was the last time that you have appeared in the elections? She has been trying to be president for a decade.

“I can’t answer that question.” They are going to say that the lady has already thrown in the towel. No, we will wait for the results. When we have them I will call you and I will answer you.