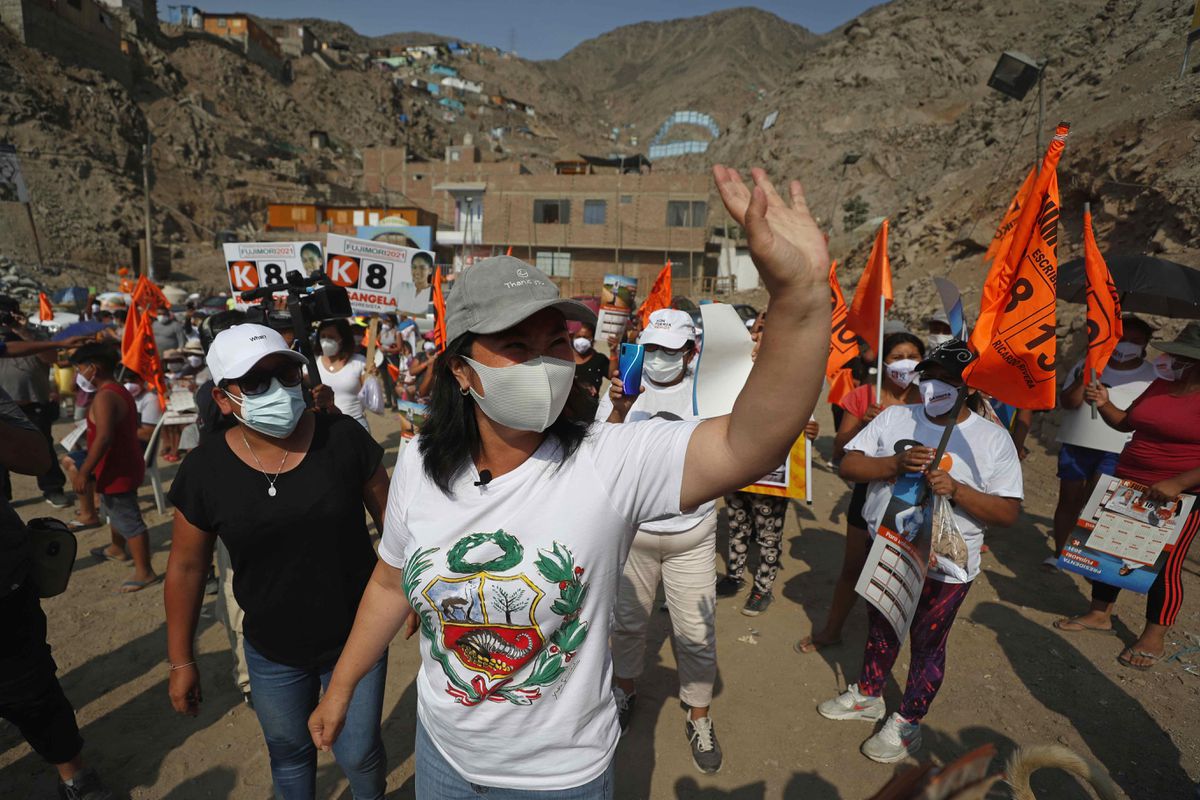 Keiko Fujimori escapes Fujimori. The eternal Peruvian leader, who in 2016 came to control Congress, has been losing support for two years, drowned by corruption and poor political success. The candidate for the presidential elections held this Sunday seeks to redeem herself by embracing the legacy of her father, Alberto Fujimori, from whom she had distanced herself. With a speech that promises “a strong hand to rescue Peru again,” he appeals to the nostalgic of the elderly autocrat (82 years old) who ruled the country from 1990 to 2000 and who now spends his days in an exclusive prison for him. But it is not the only one. “His father’s heavy hand is with me,” claimed conservative Hernando de Soto a few days ago, another of the six candidates who are fighting to go to the second round. The daughter stirred: Fujimori there is only one.

At the door of 422 on Paseo de Colón, in Lima, Julio César Aranda, 27, rings the bell at the Fuerza Popular headquarters. He wants to be a “personero” [interventor] on Sunday at a polling station to ensure the cleanliness of the electoral process. “Let us remember that Alberto Fujimori was the one who defeated terrorism [de Sendero Luminoso], a masterpiece that no other politician has been able to achieve today ”, he reasons. Fujimori is still alive 30 years later. Their support, analysts agree, must be sought among the most popular classes, who were won over with a marked populist accent and with “the blow to terrorism,” and among the upper class, which still have a good memory of a government. conservative politically and economically. “Authoritarian experiences are difficult to die for,” says sociologist and university professor Santiago Pedraglio.

The polls these days present a soup of names in which no candidate, of the 18 that are presented, exceeds 13% in vote intention. Six applicants exchange the top positions, depending on the day and the poll, making it impossible to predict the final result. Keiko Fujimori reached the second round in the last two elections. In both cases he lost, despite appearing with antagonistic speeches. In 2011, vindicating her mentor, she was surpassed by Ollanta Humala. In 2016, moving away from his father, he lost to Pedro Pablo Kuczynski. Now it seeks to recover its origins. “We have forgiven each other and today we are again working hand in hand,” he says. Some survey places it in the lead these days, but at a minimum distance from its competitors. “Everyone wants to go to the second round with Keiko Fujimori, because if you pass, you win,” explains Peruvian journalist Rosa María Palacios. No other candidate has a higher rejection than the leader of Fuerza Popular, for whom 65% of voters say they would never vote.

Rita, a retired teacher, clutches her bag to go home after entrusting herself to God at the daily outdoor mass in the central park of Miraflores (Lima). “Keiko has the shame of continuing to appear when he is in the middle of a corruption process, I will vote for Hernando de Soto, who is clean,” he confesses without stopping. Peru is going through a particularly difficult time. The coronavirus pandemic has hit the economy hard, with a fall of 11% in 2020 and an as-yet unquantified increase in poverty, which was already 20% before the covid. The political crisis is also deep. All living former presidents are accused or convicted of corruption and the instability is absolute. At the end of last year, the country had three presidents in six days, amid a scene of protests in which two young people were killed by police shots. Peruvians perceive insecurity and corruption as the first of their problems.

“All you need is a strong hand,” bellows a street vendor as he removes hair and branches stuck in the wheels of his soda cart with his fingers. The heavy-handed policy, explains the psychologist, Fryné Santisteban, “gathers the demand for an order no matter at what cost because we are again in a moment of fear and uncertainty.” “Peru has been governed by authoritarian regimes, the idea of ​​order is very imposed. In a disorderly country, the desire for order is immense, ”adds Palacios. Fujimori aspires to be that medicine without masks. During the campaign, he assured on Twitter: “A hard hand is not a dictatorship. It is a strong democracy. In a word, what I offer is a demodura ”. A new concept that takes advantage of the disaffection towards democracy, whose support in Peru is in low hours and is 43% according to the Latinobarometer of 2018.

The future of the once most powerful woman in Peru is, however, quite uncertain. The Prosecutor’s Office accused her in February of money laundering, obstruction of justice and criminal organization for allegedly illegally receiving money for her 2011 and 2016 campaigns, from the Brazilian construction company Odebrecht and the owner of the main Peruvian bank. The Public Ministry asks for her 30 years and ten months in prison. Fujimori spent three months in jail in 2020 and now the process, and the electoral campaign, continues under probation.

Some, like María Castillo, who owns a clothing store in a neighborhood of the capital, forgive their ancestors everything. “His father was the best president, he will have done things to be in jail, like other presidents, but he also did good things,” he explains. Keiko’s reunion with her father in 2021 is key for many of her followers. In 2016, in his eagerness to find his own voice far from the paternal wing, he came to position himself against the ex-president’s pardon. “That a daughter does not want her father out of jail is not acceptable for the lowest socioeconomic level,” says Palacios. The prodigal daughter knows. If the third time he manages to win his most difficult elections, which few see possible, he has promised that his father will be free.

Authorship revoked for the end of the Shining Path

Alberto Fujimori came to power in 1990 and two years later he closed Congress and the Judiciary in what was considered a self-coup. In September 1992, a special police intelligence group captured the leadership of the Shining Path terrorist group led by Abimael Guzmán. The elite police group was not subject to the de facto authority of then-presidential adviser Vladimiro Montesinos, but he tried to present the capture as his achievement. Faced with the resistance of the agents, the group was dismantled.

Traffic jam on A5 too: Many accidents on slippery roads in Germany

Investing The stock market mania grabbed Volkswagen and Kesko’s share, which benefits from restrictions, rose rapidly – Graphs show what happened in the market this week