Kazakhstan, Tajikistan and Kyrgyzstan are the latest stations of “100 million meals” 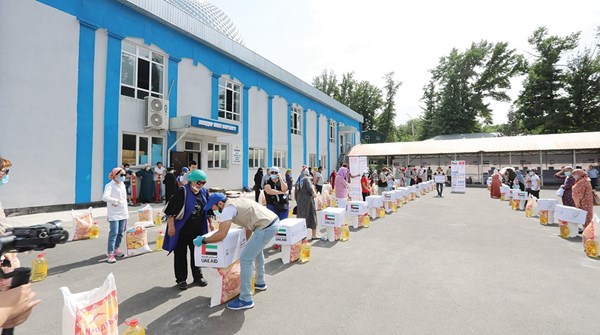 The “100 Million Meals Campaign”, the largest in the region to feed food in 30 countries and four continents, has distributed more than 600,000 meals in Kazakhstan, Tajikistan and Kyrgyzstan, to provide nutritional support to the lowest-income communities that need it most, and to contribute to combating malnutrition. nutrition and hunger.
Meals were distributed at 200,000 meals in each of the three countries in Central Asia, in cooperation with the Mohammed bin Rashid Al Maktoum Charitable and Humanitarian Establishment, and in coordination with the Ministry of Foreign Affairs and International Cooperation for International Development Affairs, official agencies and local charitable and humanitarian institutions, based on databases. Owned by families and individuals most in need and in a food formula that ensures easy storage.
The campaign had succeeded in doubling its declared goal, and received contributions worth a total of 216 million meals, provided by individuals, institutions, the business community and pioneers of charitable work from the UAE and abroad to feed the hungry and support the needy. Ibrahim Bumelha, Advisor to His Highness the Ruler of Dubai for Humanitarian and Cultural Affairs and Vice Chairman of the Board of Trustees of the Mohammed bin Rashid Al Maktoum Humanitarian and Charity Establishment, said: The Foundation has put all its resources, cadres, network of relations and external partnerships to achieve the goals of the 100 Million Meals campaign, which aims to provide food support to those who deserve it and feed food in Communities covered by the campaign around the world.
Bumelha added that the Mohammed bin Rashid Al Maktoum Humanitarian and Charity Establishment carried out the distribution of meals for the campaign of 100 million meals in three Asian countries, Tajikistan, Kyrgyzstan and Kazakhstan. The number of beneficiary families in these countries reached three thousand and one hundred families, an average of 7 people per family, and they were delivered baskets. Food to make more than 600,000 meals.
He concluded by saying: “The joint cooperation between the Foundation and all concerned parties led to the accomplishment of the mission of the 100 Million Meals campaign, which embodied the values ​​on which the UAE was founded and achieved leadership in charitable and humanitarian work, foremost of which is cooperation on land and rushing to relief the distressed without discrimination between race or religion. or gender or affiliation.
In turn, Sultan Muhammad Al Shamsi, Assistant Minister of Foreign Affairs and International Cooperation for International Development Affairs, said: “The UAE society, with all its components and spectrums, interacted with the “100 Million Meals Campaign”, launched by His Highness Sheikh Mohammed bin Rashid Al Maktoum, Vice President and Prime Minister of the UAE and Ruler of Dubai, May God protect him, to feed food in 30 countries, he affirmed the values ​​of humanitarian giving inherent in it, by providing food to members of the most needy communities around the world, especially women and children, towards meeting a basic human need that constitutes a safety valve for the stability of families and societies, especially since the lack of food leads to poor health. Nutrition and food insecurity, which threatens more than 821 million people in our world today, and we hope that these numbers will not rise with the repercussions of the emerging Corona Virus (Covid-19) pandemic and its economic and social repercussions that affected most countries of the world and affected everyone, especially fragile and low-income communities. ».
In Kazakhstan, food parcels containing the necessary ingredients for preparing nutritious meals were distributed to families and the needy, in cooperation with the Ummah Charitable Association. The distribution areas included the city of Nur-Sultan, the city of Almaty, the city of Shymkent, the Karaganda province, and the Turkestan province.
In Tajikistan, food parcels were distributed, in cooperation with the Tajikistan Charitable Association, in the city of Jihon, Waru village, Waru district, Hisar Sharshar village, Sibistan district, Dangarh city, Zamin Nou village, Bing district, and Argink village, Khanqah Kohi district.
In Kyrgyzstan, food parcels were delivered to their recipients, in cooperation with the Charity Association, in the capital, Bishkek, the Mayo region, and in the countryside of Bishkek in the Qilis Urdu region and Alameddine region.