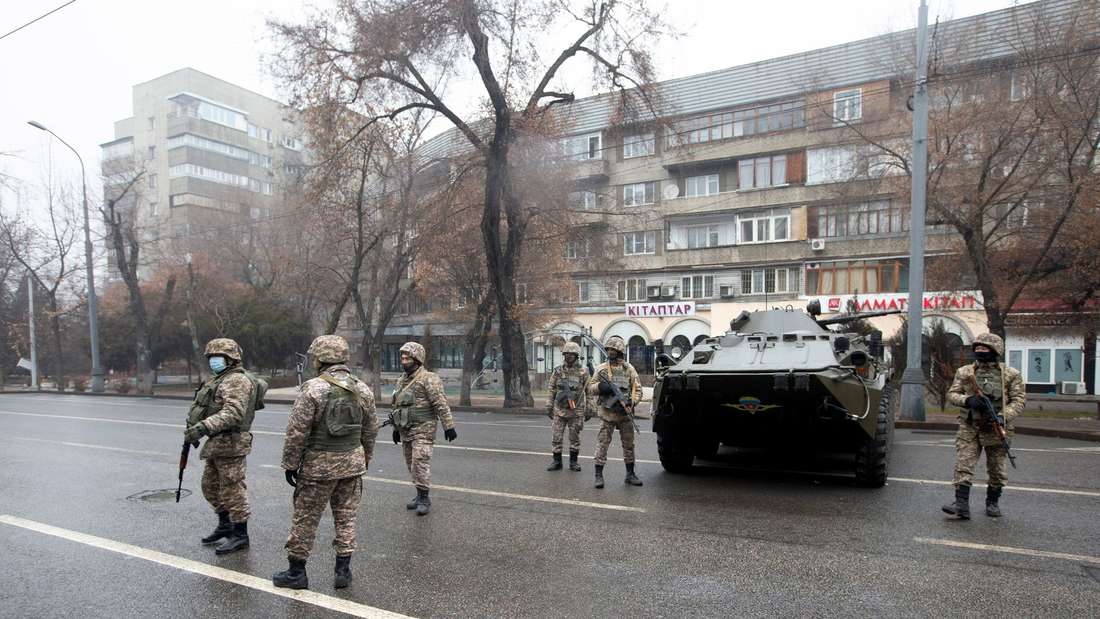 Kazakhstan does not come to rest: During the riots, the military has been taking action against demonstrators for days. The protests are not at all wrong for the authoritarian president, say experts.

Nur-Sultan – The events in the Central Asian ex-Soviet republic of Kazakhstan come thick and fast: Protests against significant gas price increases have turned into serious riots with dead and injured.

Many demonstrators take to the streets peacefully against the authoritarian leadership, and armed mobs are also engaged in skirmishes with security forces. President Kassym-Schomart Tokayev dismissed the government, deployed the military and called, among other things, Russian soldiers to help. On Friday he finally issued the order to shoot demonstrators “without warning”. Internationally, that caused a lot of horror. Some questions and answers about the situation in the ninth largest country on earth:

How did the protests develop?

For years, many Kazakhs have been frustrated by corruption and abuse of power in their homeland. The increased prices for fuel at the filling stations were only symptomatic for many, say experts. What can be observed is “dissatisfaction with the fact that, on the one hand, the country has high oil and gas reserves, but that the profits from it only reach very few,” Andrea Schmitz, Central Asia expert at the Science and Politics Foundation, told the German press -Agency.

There are now no more pictures of large demonstrations. According to official figures, more than 40 people have died in the past few days; there were numerous injuries and more than 4,400 arrests. Videos repeatedly appear in social networks on which gunshot noises and screams can be heard.

Who are the protesters?

Even if Tokayev and the state media keep talking of armed “terrorists”, in many places people continue to hold smaller, peaceful rallies, according to independent news channels. On Saturday night, around 1,000 peaceful demonstrators gathered in Shangaosen in the west of the country without violence, the Orda portal wrote on Telegram. There are arrests at such events across the country.

Violent clashes occurred in the economic metropolis of Almaty. The military has been cracking down on civilians there for days. But it is unclear who the people are supposed to be who are allegedly offering militant resistance against security forces. Sometimes it was almost impossible to get reliable information.

Why is the source situation so difficult?

The Kazakh authorities have repeatedly turned off the Internet in many places. The ex-Soviet republic has also closed its borders to foreigners. In Almaty, the cellular connection is constantly interrupted. Reaching independent journalists and observers on site was hardly possible recently.

Above all, representations by authorities, state media – and the president himself are available. But there are at least considerable doubts about them. For example, Tokayev claimed that 20,000 “bandits” had attacked Almaty. The Kazakh political scientist Marat Baschimow, however, believes that so many terrorists would hardly have been able to act unnoticed in advance by the well-established Kazakh security forces.

What are Tokayev’s intentions?

Tokayev has been head of state since the resignation of the first Kazakh President Nursultan Nazarbayev. However, essential powers remained with the 81-year-old Nazarbayev, which is why there were basically two centers of power in the country. Tokayev has a reputation for having delayed important reforms out of consideration for his political foster father. The unprecedented bloody unrest in Almaty is now creating a new system with Tokayev in the center. The former diplomat basically carried out a palace revolution parallel to the protests by largely destroying Nazarbayev’s power base.

The 68-year-old Tokayev not only dismissed the government of Nazarbayev’s confidante Askar Mamin. The President also took over the chairmanship of the Security Council from Nazarbayev, which was endowed with great power. And he replaced the powerful secret service leadership with his own confidants. Ex-secret service chief Karim Massimow was arrested for high treason. In just a few days, Tokayev would have ended Nazarbayev’s era for good, experts from the Moscow Carnegie Center think-tank wrote in an analysis. The president has probably gained the most from the crisis.

Does the crisis come in handy for Putin?

The oil- and gas-rich country with access to the Caspian Sea is Russia’s most important ally in the Central Asia region. Russia’s Baikonur spaceport, a strategically important object, is also located in the Kazakh steppe. Russia is involved in numerous crises such as Syria. But Kazakhstan is another opportunity for Putin to show strength. He also emphasizes the importance of the Russia-dominated organization of the Treaty on Collective Security, a previously rather toothless response to NATO, which is now leading the military operation.

Putin relies on dialogue between Berlin and Minsk

Putin is likely to see advantages in the operation because Russia can show itself to be the guarantor of stability in Central Asia. With the support for Tokayev, he maintains a Russia-friendly system in Kazakhstan. That could already be seen in the help given to Alexander Lukashenko, who was criticized as the “last dictator of Europe” in Belarus. Kremlin critics in Moscow emphasize that Putin’s military operation is also sending a signal to opponents in his own country that he will not let go of power at any price and, if necessary, enforce it by force – as in Belarus and Kazakhstan.

How will it go on now?

With his tough crackdown on the whole, the former diplomat Tokayev is now likely to distinguish himself as a politician who governs with intimidation and a hard hand. The experts at the Carnegie Center do not expect any fundamental reforms, but rather, as recently in Belarus, a “hardening of the regime” and pressure on those who think differently. However, this does not solve the severe economic crisis in the country, which was exacerbated by the lockdowns in the pandemic. dpa

Daniela Darcourt after having tested positive for COVID-19: “I have life, happiness and much blessing”