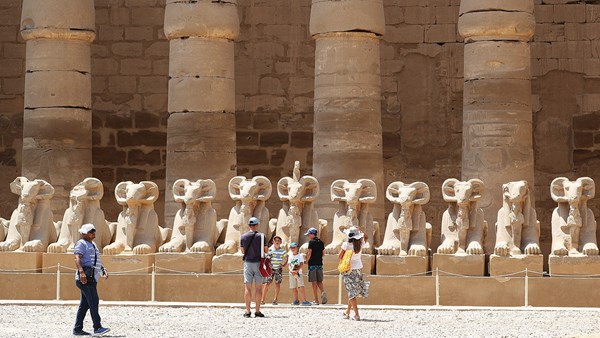 The inscriptions, drawings and colors of the Pharaonic temples of Karnak and Luxor in Upper Egypt have regained their luster, which they were thousands of years ago, after undergoing cleaning and strengthening works.
Yesterday, the Egyptian Prime Minister, Dr. Mostafa Madbouly, visited Luxor, which began with a tour of the Pharaonic Karnak Temple, and took memorial photos with the tourist groups visiting the temple, as well as inspecting the project to restore the drawings and inscriptions of the pillars lobby in the temple.

The Egyptian Prime Minister continued the ongoing work to restore the pillars’ lobby in the archaeological Karnak and Luxor temples, and the ongoing efforts to remove the accumulations that formed on the drawings and inscriptions of columns, walls and ceilings of the two temples, and to restore the drawings and colors to the image they were thousands of years ago. Egypt is preparing to open the Rams Road to tourists in a solemn ceremony, similar to the procession of transporting royal mummies from the Egyptian Museum.