Kamala Harris: “I am here thanks to the women who came before” 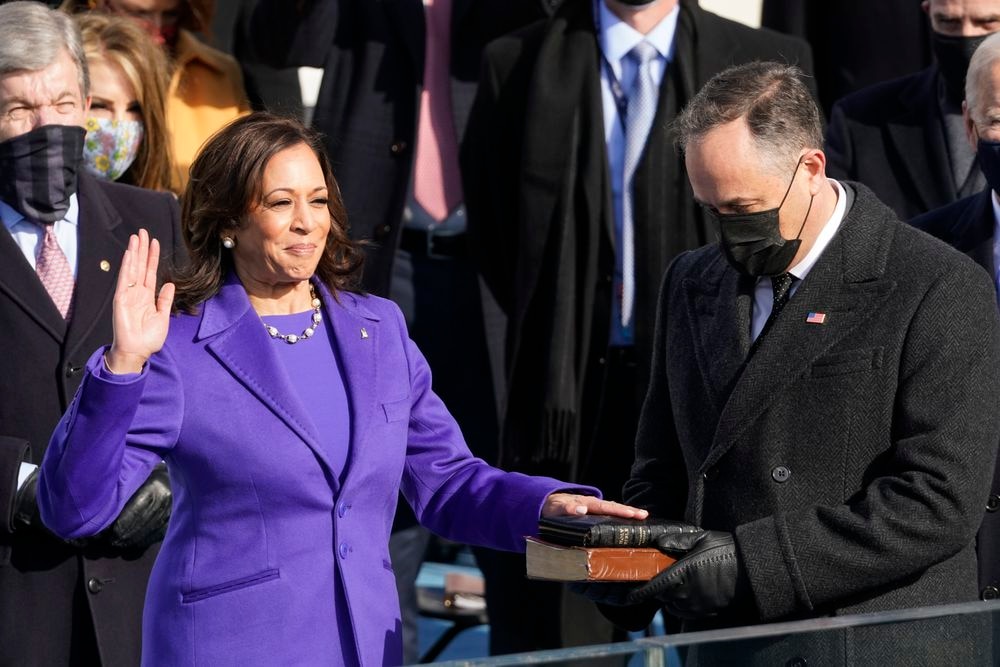 Kamala Harris dressed in feminism to make history. The first vice president of the United States arrived on the steps of the Capitol protected by a purple coat, a global symbol of the fight for gender equality. At 11:40 a.m. this Wednesday, she broke three glass ceilings: she became the first woman to swear as number two of the White House, also in being the first black person and the first Asian to achieve the task. Hours before, he published a video on the networks thanking “the women who came before” for their achievement. The greatest recognition was dedicated to his mother, Shyamala Gopalan, who came to the United States from India at the age of 19, believing that in the country “a moment like this is possible”.

Without a mask, with a solemn face and raised hand, Kamala Devi Harris (Oakland, California, 1964) was sworn in on the bible of Justice Thurgood Marshall, the first African-American to serve on the Supreme Court. In his memoirs, Harris calls him one of his heroes, an inspiration for his political activism. In 1992, she heard him say in a speech: “We cannot play ostrich. Democracy simply cannot flourish amid fear. ” Her testimony pushed her to sow a career of successes that will be told in the history books: district attorney, state attorney, senator, and this January 20, the 46th vice president of the United States.

“Ready to serve,” Harris wrote on her new Twitter account, @VP, after swearing in office before Judge Sonia Sotomayor, the first Hispanic in the Supreme Court. Thanks to Harris, her husband, Douglas Emhoff, who became the first second gentleman, has also made history. Before the ceremony, former President Barack Obama whispered: “I am very proud of you.” The masks did not hide the emotion of both as they clashed their gloved fists in the cold, but bright day of investiture.

In video, profile of Kamala Harris, from her childhood as a family (in the image), until she became vice president of the United States. Video: EPV

In a day full of symbolism, Harris arrived at the federal building escorted by the African American Eugene Goodman, one of the agents who confronted the attackers on the Capitol and tried to prevent them from reaching the Senate. The face of the heroism of the dark episode. On the way out, he accompanied his predecessor, Republican Mike Pence, as he descended the steps. It was the image of the transition between two seconds, after Donald Trump refused to participate in the inauguration.

The vice president took an oath in Congress that she must attend more than usual for someone in her position. In the last elections, the Senate was divided into 50 seats for Republicans and another 50, including two independents, for Democrats. Harris will be able to break any possible tie in favor of her party, since her new position implies being the speaker of the upper house.

In the militarized streets of downtown Washington, some young women appeared in Harris or Howard University shirts, their first academic home, the flagship of black education. Arlynne Maxwell, 40, white, traveled from Utah to congratulate the former senator, albeit from a distance. In one hand she carried a bouquet of red roses and in the other a sign that read “Dear women of color, thank you women of color.” “They saved our democracy, they voted in record numbers for a couple that will return decency and honesty to the White House,” says Maxwell in front of the police fence that blocks the passage to Pennsylvania Avenue, where the inaugural parade is traditionally held, suspended this time for the pandemic and security reasons.

On U Street, a few blocks from Howard University, makeshift stands sold T-shirts with the face of former student, Kamala Harris. A year ago, from the gardens of the educational center, the now number two Joe Biden’s had announced his candidacy for the presidency and this Wednesday he winked at them wearing a necklace and pearl earrings. When she was studying law she was part of the Alpha Kappa Alpha sorority, AKA, the first sorority with Greek letters for African Americans. The founders are known as the “Twenty Pearls” and in the initiation ritual each new member receives a special badge decorated with 20 pearls.

There are many expectations in the figure of Harris. Joe Biden, 78, has suggested he will be president for just one term. If this scenario is fulfilled, the path of the vice president for the presidential race of 2024 would be clear. It would carry the legacy of the Democratic Administration that promises to heal the United States with a colossal project both economically and socially. Sheltered by her party, Harris would be the candidate to break the glass ceiling of the White House that has kept women out of the Oval Office. So far it has been successful smashing glass.

Nadal: “I’m not ready for a match of maximum intensity”