Kabul, life in the city that shed its skin in a week 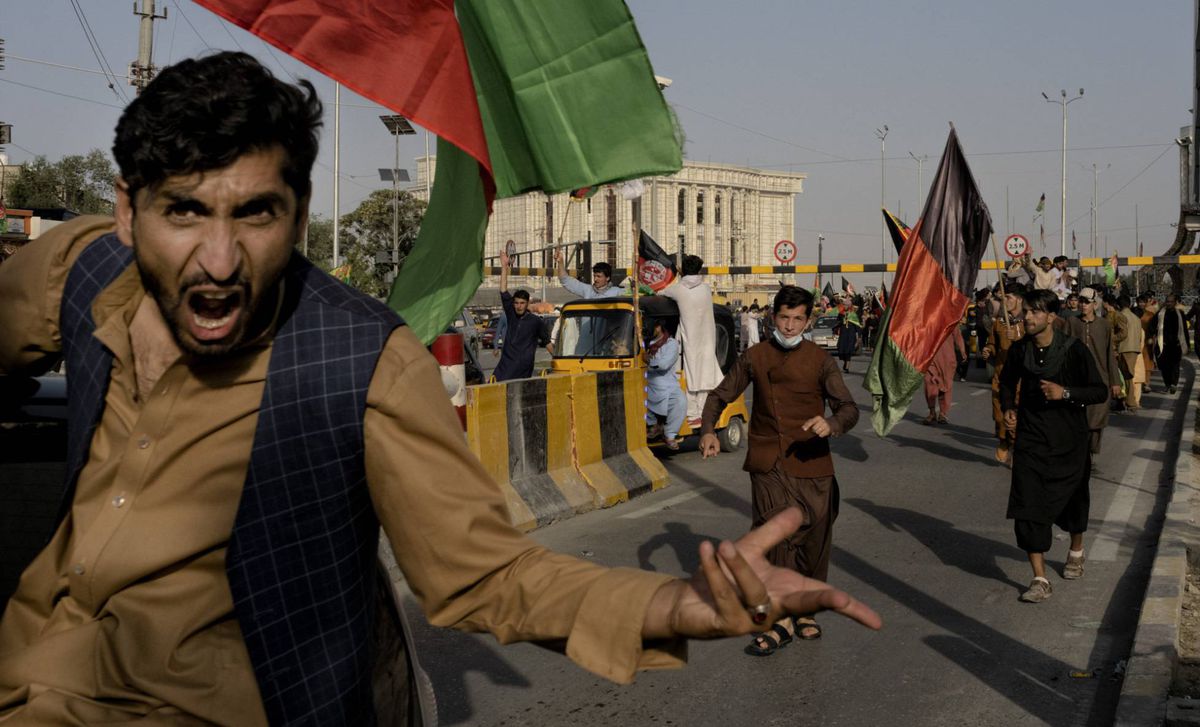 The daily scenes of women crying inconsolably and their husbands making daily trips to the airport – even several times – risking gunfire and attacks by the Taliban patrols, who defend every millimeter of access to the airfield, clearly describe the first week of life in Afghanistan emerged from the victory of the fundamentalist group. Fawad, my roommate at the hotel where I am staying, explains in perfect English that he made a living as an information analyst and that now he is constantly receiving death threats. Fawad shows his mobile phone, his Instagram account and his desperation to get out.

The emails that he shows, coming from the United States Embassy, ​​are the same that I received on Thursday for the first time and that warn that we do not share this information due to the risk that our departure from the country is even slower.

His experience is similar to that suffered these days by thousands of Afghans with the legal possibility of leaving Afghanistan, but without real means of reaching the airport due to the chaos that reigns in the area. Fawad has all the papers in progress, the authorizations for him and his family, but for the fourth day in a row it has been impossible for him to access the entrance gates of the airport. There, the crowd is greeted with bullets by the same Taliban patrols desperate to control the entrance.

The situation is also chaotic these days in the Embassies of the United Kingdom, France, Australia, Canada … There are lines of two kilometers of people waiting under a scorching sun – no water, no food – for the possibility of being They process their visas to be able to leave the country. International authorities say they cannot do more due to lack of personnel.

Desperation is aggravated in the places where the tens of thousands of displaced people are concentrated, who came to Kabul fleeing from the Taliban from cities like Herat or Kunduz and who have now been trapped again. They are spread over numerous makeshift camps in Kabul. In one of these there are about 60 women who worked as police officers and now, without uniforms, they try to hide from the Taliban, so that they do not know what they were working on.

In the fields of Park Shari and Sarai Shamali, the testimonies of women who say they prefer to die to continue more days there are multiplied, crowded, men and women mixed, with a temperature above 40 degrees. Those concentrated there take refuge under plastic roofs and sleep on rugs and broken plastics, with little water and no electricity. There are families who have come to distribute food and have ended up with the broken glass and broken mirrors in their trucks and they are fleeing in fear that the crowd will suffocate them in the urge to get food.

In the streets of Kabul, even the Taliban, despite being the winning side of this war, are sometimes prey to confusion. We have seen some patrols of completely lost men asking each neighbor for directions and areas of the city. It is seen that for the vast majority it is their first time in Kabul and they are completely amazed by some comforts that they have never seen in their villages. They are fascinated by sports cars and are photographed with the few Mercedes or other high-end cars they find. This battle is not like the ones they fought in the mountains, the ones that so characterized their skirmishes with the Americans.

The banks have not worked since last Monday, and the ATMs are empty of bills. Nor can you pay by credit card. There are rumors that they will open next Monday, but no one knows for sure because rumors also circulated that they would open on Friday. Meanwhile, many of us are without money, leaving everything to duty.

Another focus of interest is the Blue Mosque of the Shiite community in Kabul, which celebrated one afternoon this week the day of the death of Iman Hossein, Muhammad’s grandson. This is especially revered by the Hazara ethnic group, which has recently been attacked by the Taliban militias, staunch enemies of Shi’ism, considering it a heretical current. Indeed, Amnesty International (AI) on Friday denounced the killing of nine Hazara men by the Taliban after taking Ghazni province last month.

Since I arrived at the mosque, fear has been felt. The imam receives us with tremendous kindness, inviting us to take shelter under the staff’s quarters. Then numerous groups of Shiites began to arrive who, in defiance of the ban on demonstrations, even appeared armed to worship and shout for their beloved Iman Hossein. Seeing me take pictures the alarm goes off. Many ask me questions. The first is about my nationality. I am tired of explaining that I am Chilean, a long country in South America attached to Argentina: every time I say the word America it seems that the eyes of those who ask are filled with rage. As always happens today in much of the world, the fame of Spanish football clubs is so great that I do not hesitate to answer them that I am Spanish, from Barcelona. The problem is solved. The fear of the population before my camera is justified. A photograph can put them in danger. “We are doubly sad. Today is the commemoration of the Battle of Kerbala, where our imam was massacred, and today our history, our city, our neighborhoods, traditions and culture are once again threatened by the Taliban. It is preferable to die than to live under its oppressive rules ”, explains a doctor who prefers not to reveal his identity.

The day before, the visit was made by the Sikhs. They also feel threatened and say that almost 5,000 members of this community have left Kabul shortly before the entry of the Taliban. They have already suffered two attacks last year. And this thriving community of more than 10,000 people is today reduced to less than 500 faithful. It must be remembered that the first Mughal empire ruled India for almost 300 years and that the first capital was Kabul, before successive rulers transferred it to Accra. That is why there has always been a relationship with India that is currently totally threatened.

Today, in this city full of history and tradition, even weddings are sad. Before, a wedding was synonymous with party, dance, waste. This week I was invited to a wedding where no one danced, where everyone was scared, scared. It looked like a funeral more than a wedding.

On the street it is the same. The strident music that sometimes played from the radios of the shops has generally stopped playing. In many stores, to avoid problems – among other things that the Taliban take over the genre – many merchants play, instead of music, the instrumented religious declamations of the Taliban.

Meanwhile, the Taliban search, door to door and building by building, for the weapons and military and luxury vehicles of the previous Administration, which had a bad reputation for corruption and nepotism.

In the streets, in the neighborhoods, not everything is discontent. In the markets it is also seen that part of the merchants, easily recognizable by their long beards and their turbans, do not hide their joy that the Taliban of their same ethnicity already control power. “Maybe it can be a problem for you as a foreigner,” explains Youssuf, a melon and watermelon seller. “We have never had a problem with the mujahideen,” he adds, openly admitting his sympathy for the Taliban.

What has radically changed on the streets is the presence of women. In affluent neighborhoods they are no longer seen walking in their Western clothes. There are cafes that used to serve as places of recreation and where women went alone. Now these cafes are closed. And those women, stuck at home. Many of these women have bought or commissioned burqas, as the vendors in a traditional clothing store tell us. I myself buy typical Afghan men’s clothing to try to be inconspicuous in the distance.

The same is not true in the poorest areas. There you can see groups of women in the markets, although completely covered. “It is better to die at the hands of the Taliban than to starve,” confides Sahima, who carries her son in her arms and carries dozens of vegetables for the family lunch.

Amid the chaos and bewilderment that seems to grind Kabul, it is not known whether the Taliban will be able to control this city of nearly five million people. The situation changes every moment and I am living these events at a dizzying speed. Nobody knows what could happen tomorrow with the airport, with the displaced or with ethnic minorities. It is not even known what will happen to the opium smokers – here a deeply ingrained custom – who hang out in the parks with their pipes. The Taliban prohibit the practice, but smokers cannot quit overnight after years of addiction. Kabul is today a city that fights for its survival and its destiny.

Jorge Said is a Chilean journalist and filmmaker who produced reports in Kabul when the capital fell to the Taliban.

Centennial vote: a universe of seven million young people who can define the 2021 elections