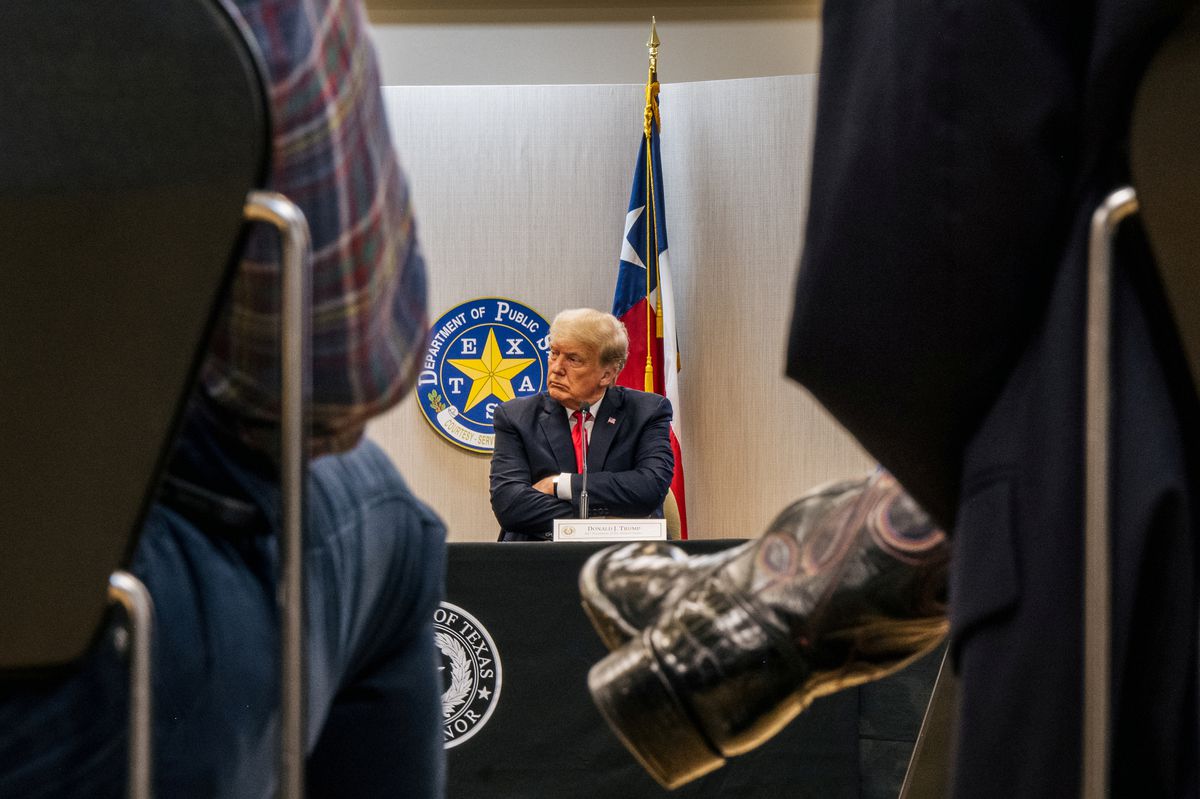 Former President Donald Trump has emerged this Thursday unscathed from the indictment of the Manhattan prosecutor’s office against his real estate emporium and his financial person in charge of fraud and tax crime. But the action of justice may hinder his political plans, including his hypothetical candidacy for the White House in 2024. The prosecutor has accused the company of maintaining a scheme for 15 years to defraud the treasury, and the finance chief, of not declaring $ 1.7 million in taxes. Allen Weisselberg, the tycoon’s right-hand man, turned himself in at the prosecutor’s office as part of a criminal investigation into alleged undeclared luxury payments. The Republican has not been charged, nor have his children, whom he placed at the helm of the company when he arrived at the White House, but his name has been tarnished precisely when he returned to the political arena, campaigning for the mid-term elections of 2022.

Weisselberg is accused of receiving benefits such as apartments, luxury cars and private school fees for at least one of his grandchildren without declaring them to the Treasury. The filing of charges against the Trump Organization was an open secret in the city after the prosecution convened a grand jury in late May. Weisselberg, 73, a loyal servant of the tycoon for almost five decades, has appeared handcuffed at noon this Thursday with his lawyers and those of the company to hear fifteen charges, after having surrendered, at 6:20 a.m. the morning (noon in mainland Spain), to the authorities.

Trump’s old squire pleaded not guilty, while organization sources described the accusations against him as political, with the sole objective of harming the former president. Weisselberg has negotiated Trump’s loans, is a co-signer on his accounts, helps file his taxes and, along with his boss’s children, has overseen the trust that held all of his assets while the tycoon occupied the White House. The only person outside the family clan with direct access to the group’s finances, his role makes him a perfect scapegoat, for the benefit of his employer, who already in February called the Manhattan prosecutor’s cause “fascist” and “politically motivated”. ; “The greatest witch hunt in US history.”

But, despite Weisselberg’s declaration of innocence, the serious caliber of the charges could end up convincing him to agree to collaborate with justice, something he has refused until now. Nobody better than him, the man Trump publicly applauded for doing “whatever it took to protect the bottom line”, to unravel the web of real estate deals that catapulted Donald Trump to fame as a successful businessman and, subsequently, took him to the White House. The indictment will be a litmus test for the loyalty of Weisselberg, through whom prosecutors hope to find out whether these payments in kind were a common practice at the top of the group.

“The district attorney is initiating a criminal proceeding on employee benefits that neither the Treasury nor any other district attorney would consider criminally wielding,” the Trump Organization said in a statement, calling Weisselberg a “pawn” in a cause designed solely to harm your boss. “This is not justice, it is politics,” the firm emphasizes.

Furthermore, Weisselberg’s indictment does not put an end to the investigations. Manhattan District Attorney Cyrus Vance, who is retiring this year, has been working hard on his latest big case, paralleling the investigations of New York Attorney General Letitia James. The two ongoing investigations into alleged tax fraud came together in May, when Vance’s office opened a criminal one to determine whether the former president could have undervalued some properties of his estate to partially avoid paying taxes. Both instances have been investigating Trump’s businesses for fiscal and banking irregularities for more than a year. Both James and Vance are Democrats, a ammunition added for tycoon.

The solvency of the Trump brand is at stake. Even if he takes advantage of the accusation to feed the victimhood before his followers, the Republican could be burdened by the distraction of a trial if he tries to launch his campaign for the presidency in 2024; but also economically, as when in January, after his followers stormed the Capitol, the political rejection also turned into corporate repudiation.

Trump has not expressed his intention, but many are sure that he will run again for the presidency … if the brand does not get too dirty by the action of justice. His image as an independent businessman, with the necessary fortune not to depend on the favor of the elites, managed in 2016 to convince an electorate impoverished by the effects of the Great Crisis, and became his main asset. His involvement in a case of tax fraud would make him lose money before that base of voters – a non-urban, peripheral working class – doubly hit, now by the economic ravages of the pandemic.

Trump returned to the political arena on Saturday, in his first rally since the Jan.6 assault on the Capitol, to settle scores with Republican renegades who have turned their backs on him. Despite doubts about the scope of his leadership in the party, the former president continues to clean up the leadership. In May, Liz Cheney was expelled for refuting unfounded allegations about the electoral fraud in November. But like the heads of a hydra, the setbacks multiply for Trump and the maligned Cheney will be part of the committee that will investigate the rampage at the Capitol. This Saturday, in Ohio, the former president took a crowd bath during which he ranted not so much against his successor, Joe Biden, but against the disaffected who in January voted in favor of submitting him to a new impeachement for haranguing his followers before the assault on the Capitol.