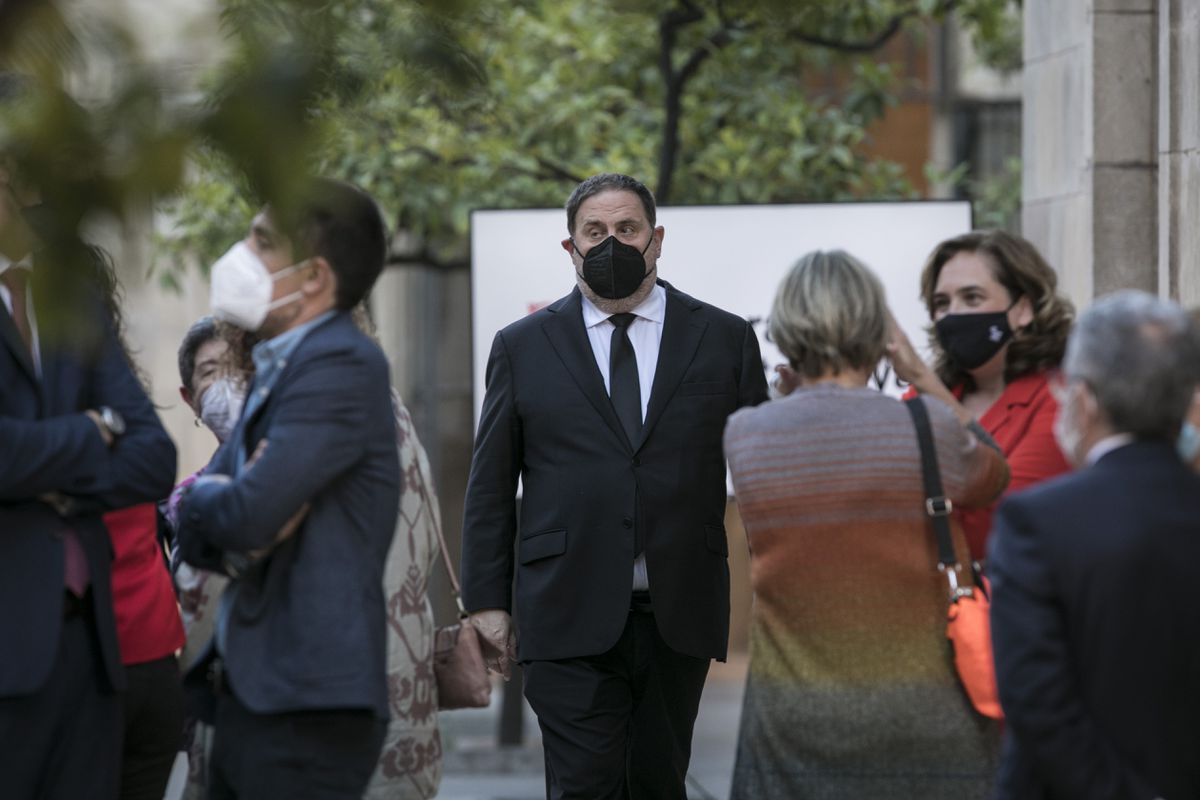 The pardons will be welcomed as a “gesture to alleviate the pain” and the independence of Catalonia has to be defended through a “agreed” referendum because other paths, such as the unilateral one, are not “viable”. The leader of Esquerra Republicana, Oriol Junqueras, has made an important strategic positioning today in a platform published in the newspaper Ara and in La Sexta in which he welcomes the pardons by stating that it will be a measure that will relieve the prisoners of the procés. It does so in the final phase of the processing of pardons and when from many sectors the independence movement was being asked to issue a signal that facilitates the measure of grace. The party leader, sentenced to a 13-year prison sentence for sedition and embezzlement, maintains that pardons are “gestures that can alleviate the conflict, alleviate the pain of repression and the suffering” of Catalan society. “Any gesture along the lines of de-judicializing the conflict helps to be able to travel this path,” he says.

In the article, Junqueras has admitted that the unilateral path that the Parliament promoted in 2017 was not understood “as fully legitimate by a part of Catalan society” and in line with ERC’s strategy, he admits that they need these premises: “We need to be more; an incontestable, plural and transversal majority that puts the resolution of the conflict through democratic means at the center of the agenda ”. Junqueras clearly establishes the strategy that he must defend now, far from the unilateral path that in 2017 ended with the intervention of the Generalitat and the imprisonment or flight of the members of his Government. Junqueras advocates “the path of the pact and the agreement, the path of the agreed referendum.” According to him, this is “the option that generates more guarantees and immediate international recognition. Because we know that other routes are neither viable nor desirable insofar as, in fact, they take us away from the objective to be achieved ”. Junqueras does not directly cite the rejection of the unilateral path, but with this phrase he moves away from these positions more clearly than in the past.

On video, the statements of Pedro Sánchez and Pere Aragonès after knowing the letter published by Oriol Junqueras.ALBERT GEA (REUTERS) / VIDEO: QUALITY

Junqueras has published the article in the two media coinciding precisely with Pedro Sánchez’s visit to Barcelona and in full excitement about the granting of pardons, which will possibly be produced – at least that is the agenda that Minister Miquel Iceta is considering – before the summer. Pere Aragonès, president of the Generalitat, had already insisted in recent days that he will not disdain any measure that alleviates the pain of the prisoners but that his claim to resolve the political conflict involves the referendum and self-determination.

Junqueras’ article defending pardons and moving away from ways other than a Scottish referendum comes after he himself had taken the opposite position on numerous occasions. In an interview in EL PAÍS in January 2020, he defended the unilateral approach applied by the independence movement in 2017. “It was well done,” he said. Later, in an interview in Nació Digital, he despised the pardon route. “They can put it where it fits,” he said.

Junqueras raises in the article to make a deep reflection on the “strengths and weaknesses” of the movement and the “mistakes and successes”. Despite pointing out that the State acted far from “democratic principles”, the Republican makes self-criticism about the unilateral way: “We have to be aware that our response was not understood as fully legitimate by an important part of society, also the Catalan ”. Therefore, he extends his hand to all those who felt excluded on October 1.

Marta Vilalta, spokesperson for Esquerra, has claimed that the article is part of the new stage of dialogue and has argued that Junqueras has appealed to the “Scottish” route, defending as always amnesty and self-determination. “There is no news in this regard,” he said, denying that Junqueras his party is renouncing the unilateral way. The deputy recalled that her party approved a political presentation in its congress that said that they did not renounce any democratic and political path; that Junqueras and Marta Rovira wrote a book about it and that they now have consensual agreements with pro-independence parties. “Our priority commitment is the commitment to dialogue and negotiation and let’s do it like in Scotland”, he said.

Elsa Artadi, spokeswoman for Junts per Catalunya, has argued that the pardons are “a personal solution” and that her party welcomes her. “We do not want any of the nine political prisoners to spend another minute in prison. Is it a solution to the political conflict? Obviously not. Is it a change, a turning point on the part of the Pedro Sánchez government? Neither ”, said the deputy who has denied that the measure responds to a turning point of the Executive by attributing it to international pressure and the setbacks that Spain has suffered from judicial bodies or recently, as the Council of Europe has said. . “It is a reaction to the pressures that are being exerted from Europe, the courts and international organizations, which are telling Spain that this is not the case. We have seen it from the first Euroorder that was withdrawn, until this week with the Council of Europe. All this is generating pressure on the Sánchez government for trials that will eventually reach Strasbourg, and that will end up annulling a trial of shame, “he reports. Tomeu Mascaró.

In a press conference, the deputy has argued that the three pro-independence parties and the two social entities contemplate the unilateral path in their political presentations, although, precisely, all the agreed path. “We have an obligation to explore everything. All the papers from the parties say so ”, he affirmed, vindicating the unilateral referendum. “The 1-O was one-sided. The independence movement does not renounce it on 1-O. We cannot rule out paths ”, he stated.