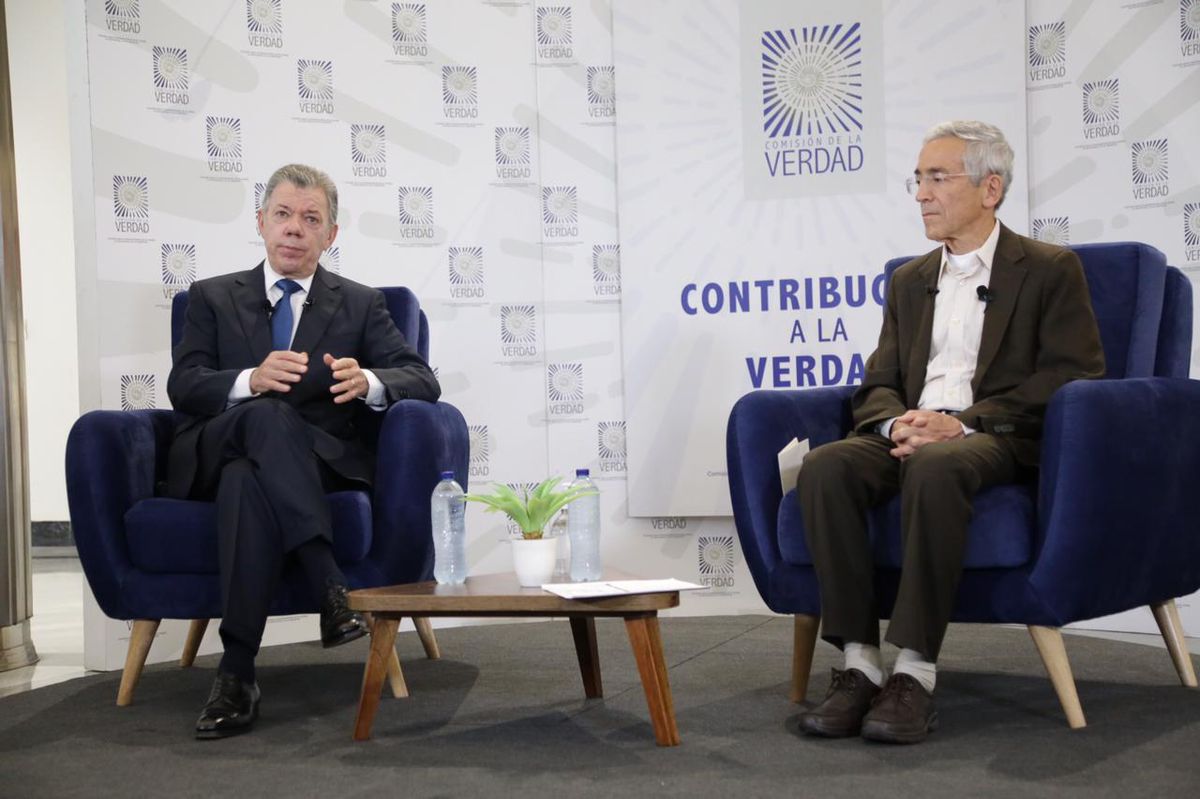 The so-called “false positives”, the euphemism with which the murders of civilians by the military are known to later present them as guerrillas killed in combat, are one of the most painful and inconceivable episodes in the degraded armed conflict in Colombia. “The truth, however difficult it may be, is the basis for reconciliation,” former president Juan Manuel Santos (2010-2018) declared at the outset this Friday when he appeared before the Truth Commission, which emerged from the peace agreement with the defunct guerrilla of the FARC, to speak about the extrajudicial executions, which he described as “national shame.” His words represent a remarkable milestone in the recent history of the country, immersed in a complex transition as part of the implementation of that hard-negotiated pact.

The “false positives”, mostly perpetrated during the two terms of former President Álvaro Uribe (2002-2010), the most staunch opponent of the peace negotiations, have been a permanent source of shock in a society that seeks to turn the page on violence without dodging the truth. The audience, a session Of about two hours transmitted virtually, it is part of the voluntary contribution spaces promoted by the Commission, chaired by the Jesuit priest Francisco de Roux, which sails amid the climate of polarization that has characterized Colombia in recent times. Santos himself wanted to focus his presentation on extrajudicial executions, which largely occurred when he was Uribe’s defense minister between 2006 and 2009, before his notorious estrangement.

The Commission, which is due to deliver its final report this year, is an extrajudicial entity but works in coordination with the Special Jurisdiction for Peace (JEP), the transitional court of justice in charge of trying the most serious crimes. After the accusation of kidnapping against the FARC leadership, the case for extrajudicial executions is the most advanced of the seven large processes opened by the JEP: the court established in February that between 2002 and 2008 there were more than 6,400 victims of “false positive ”.

“When I arrived at the Defense Ministry on July 20, 2006, I shared with President Uribe his goal of defeating the FARC. Where we had a difference was in how, ”Santos said. Although the so-called Democratic Security policy left a window open for eventual negotiation, “Uribe actually wanted to finish off the FARC militarily, he wanted a total defeat. He never even wanted to acknowledge the existence of an armed conflict; the guerrillas for him were simple drug traffickers and terrorists, ”continued the also winner of the Nobel Peace Prize for the agreement that his government sealed at the end of 2016 with what was the most powerful guerrilla in Latin America.

The positions of both have differed since then, according to Santos, who won the 2010 elections with the support of Uribe. “In my case, due to all the experience and accumulated information, and perhaps because of my way of seeing things, I considered more feasible and convenient, faster and less expensive, a strategic defeat –Weaken them psychologically and militarily– and bring them to a negotiation table ”, he said at the beginning of his presentation. “But Uribe was the president and I was his subordinate.” His predecessor insists on modifying the agreements and repealing the JEP.

“This is not an easy story to understand, not only because it is inconceivable that men of our National Army have committed or tolerated these events, but because two absolutely contradictory phenomena occurred in parallel,” Santos explained. While there was a notable general improvement in the behavior of the troops on the ground, thanks in large part to their training in human rights, there was an opposite tendency in certain units and regions, “to commit homicides of a protected person or extrajudicial executions” .

By those years, the balance of military power had tilted in favor of the state. In March 2008, three of the seven members of the FARC secretariat died. A few months later, Operation Jaque occurred, which allowed the rescue of 15 hostages from the depths of the jungle, including Ingrid Betancourt. “What the country knows less about is the work that was done at the same time to strengthen the commitment to human rights and the legitimacy of the Armed Forces, and therefore their effectiveness, through an ambitious and well-planned human rights policy. ”, Defended Santos.

In the midst of these advances, information was beginning to emerge that warned of alleged extrajudicial executions. “The pressure to produce casualties and the rewards for achieving it were, without a doubt, the main incentives to produce such a degradation of the conflict,” Santos said, admitting that it took time to accept it, since in his first months at the head of the ministry it did not give him credibility to rumors. “I also wrapped myself in the tricolor flag and on several occasions I went out to distort what everyone in the official establishment considered malicious accusations,” he said.

He began to overcome this “state of denial” with information that came from credible sources since 2007. “More than half of the ministerial directives that we produced that year were aimed at attacking this horrifying phenomenon,” he said. The following year, victims reported as missing in Soacha, a municipality near Bogotá, appeared in September as killed in combat near the border with Venezuela. It was the confirmation of the most emblematic case of “false positives”. “Boys had been recruited in Soacha for supposedly quick and lucrative work, and then transported to Norte de Santander to be killed and presented as ‘positive’ by the Army. So macabre. Something inconceivable and deeply inhuman, “said the former president.

So he created a commission that investigated on the spot and detected serious gaps and irregularities. The report left him “stunned.” The evidence of negligence on the part of the commanders was so strong that they decided to separate 20 officers and seven non-commissioned officers from the ranks, including three generals and four colonels, for failures that occurred under their command. The announcement was made by President Uribe himself on October 28, 2008. Then 24 more officers came out. The Army commander ended up resigning.

“I have no doubt that the original sin, which basically gave rise to these atrocities, was the pressure to produce casualties and everything that was woven around what many have called ‘the Vietnam doctrine”, he reiterated Santos towards the end of his speech. “But at the same time, to be honest, I have to say that President Uribe did not oppose the change of that nefarious doctrine, which he himself had encouraged. I never received a counter order, nor was I unauthorized, “he added.

The ex-president lamented that “despite having done everything humanely and legally possible, we were unable to cut off the extrajudicial executions in one fell swoop, but” the fundamental objective of ending false positives was achieved. ” “I am left with remorse and deep regret that during my ministry many, many mothers, including those from Soacha, lost their children to this ruthless practice (…) That never should have happened. I acknowledge it and I apologize to all mothers and all their families, victims of this horror, from the depths of my soul, “he concluded.