Juan Llorca and Melisa Gómez: “The more time with the grandparents, the greater the consumption of sugary or sweet drinks” 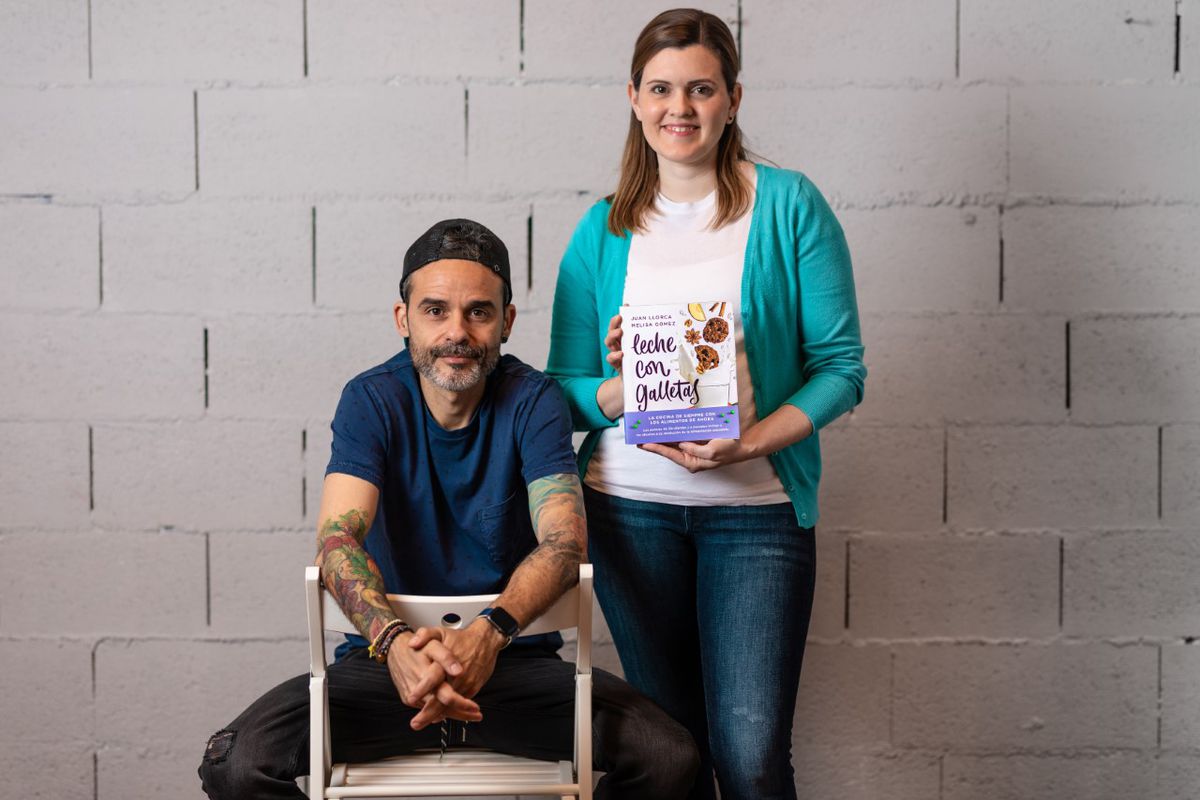 Grandparents and grandmothers are for many families the closest they will be to giving meaning to that fuzzy term that is conciliation. The luckiest ones have their logistical support, their unconditional love and even the occasional rice container to save them from the daily cooking run over. Melisa Gomez and Juan Llorca believe that time with their grandparents is a gift for their grandchildren, but they also know that many give affection to their grandchildren in all possible ways, including food in the form of sweets and whims. “What grandfather can resist a request from his granddaughter?” Asks Llorca. The chef from Valencia Montessori School and the dietitian-nutritionist have just published Milk with cookies (Vergara), a book in which grandmothers and grandfathers are given the keys to achieve a healthy diet. Keys and recipes, because the book contains 50 proposals for meals, dinners and snacks so that eating rich and healthy is a reality, regardless of the generation to which we belong.

QUESTION. How do grandparents eat, in general?

JUAN LLORCA. Difficult question to answer, since I would tell you that, in general, they eat much more seasonal produce, they have more habit of going to markets, buying in greengrocers and neighborhood greengrocers and that makes their diet perhaps simpler and more traditional. But they also eat a lot of sweet. Maybe not sweet like industrial pastries, but oven-baked and the typical cookies.

MELISA GÓMEZ. I think that today we find a fairly heterogeneous group of grandparents and grandmothers, with some more attached to customs and typical dishes, others who try new foods and like to innovate and others who spend less time in the kitchen and support each other more. in processed or prepared foods. In a very general way and according to what some statistics show, it seems that with each new generation less time is spent in the kitchen and more time is given to pre-cooked and ultra-processed, a trend that we hope can be reversed.

P. I ask them this because although they may have a healthier eating pattern than many young people, they also point out that they like to indulge with unhealthy products …

JLL. For them, time with their grandchildren is something wonderful, so they tend not to know how to deny them anything. What grandfather can resist a request from his granddaughter? Grandparents nurture grandchildren in every way possible, including feeding them in the form of sweets and treats.

MG. Yes, when we review the existing studies about the influence of grandparents on the eating behavior of their grandchildren, we found that in many of them associations were found such as longer time with grandparents, greater consumption of sugary drinks or exposure to sweets, in addition to use food on many occasions as prizes or as a way to pamper the little ones.

P. And then there are phrases that are usually very established and that encourage this “emotional eating.”

MG. Yes, one of the most used strategies to encourage children to eat above their appetite is blackmail. It can be expressed with phrases such as “If you eat X (some food that is considered healthy) or if you eat everything, then you can eat X (usually a sweet or hyperpalatable product) or you can play X” (or any other action that is considered a prize); “If you don’t eat X you won’t be able to grow or get strong” or “if you don’t eat you won’t grow”; “Aren’t you going to try it? Or aren’t you going to eat a little more? … Grandma has done it with a lot of affection ”. These types of expressions can encourage children to eat beyond what their hunger or satiety signals indicate.

P. What other ways do you have to pamper or spoil your grandchildren other than with food?

JLL. With his only company. In the end I remember my childhood with my grandparents not because of how well or badly I ate, but because of being with them, their stories, their love, playing, bike rides, when they came to pick me up at school …

MG. The most important thing is the timeshare. Time to read a story, go for a walk, learn a skill (like gardening), or even cook something together. If it is not an option or you want to resort to something material, you can opt for some stickers, some colors or a story, which are details that never fail.

P. Can you really convince grandparents and grandmothers of the importance of good nutrition in childhood?

JLL. It’s somewhat complicated (laughs). They tend to have very established patterns, beliefs that they have grown up with and have raised their sons and daughters with. I believe that with affection, speaking, empowering them and giving them arguments that are understandable and do not blame them, but help them feel more important, surely we can do something.

MG. Indeed, it is not easy, but seeing more and more grandparents in nutrition consultations accompanying parents, in talks on these topics or learning through books, press and networks, encourages us to continue believing that it is possible.

P. When children do not like or want what there is to eat, there are grandparents who choose to prepare something else for them at the time. There are families to whom this does not seem right. What do you think of this?

MG. It doesn’t necessarily have to be a bad thing. If the second option were another healthy dish, there is no problem. You can always offer alternatives such as fruit or if there is a first or second that they like, serve them more. Like adults, they may want one dish more than another. What is usually tried to avoid is that this is repeated constantly so that it does not limit the variety of the menu and makes it monotonous with two or three options that are repeated without place to other recipes or foods. For example, macaroni and bolognese, Nuggets with french fries, etc. Remember that planning the menu will be the responsibility of the adult, listening to the preferences of the little ones and trying to accommodate them, but ensuring, as far as possible, that it is varied and healthy.

P. How to talk about all this to grandparents without hurting their feelings or making them feel alien to parenting?

MG. This is one of the biggest challenges, and it is also something very personal because it depends on the relationship that each person has with their parents. I believe that by using a primarily positive approach (less judgmental and more inviting) and informing about the reasons for doing many of the things we do today, we can get support even if they don’t see it the same way.

JLL. In the book they have a wonderful section written by Melisa where it can be understood and they can be reflected. Our intention is to make them participate in the upbringing, of the important role that they play today – with how difficult it is to reconcile the work part with the family part – and that they feel all that they can contribute in the present and future of their grandchildren and granddaughters.

P. Why is it important for the whole family to work together to achieve healthy eating?

MG. Because in food, as in many other issues, the union will be key to achieve a better result. Starting with breastfeeding, to name an example. If the mother’s desire is to offer breast milk, but in the face of difficulties her closest circle (mother, mother-in-law, sister …) question her, advise her to offer a bottle, make her feel guilty because it may seem that the baby is left with hunger, breastfeeding is much more likely to be abandoned along with all the benefits it could bring. In the same way, if at home fruits are mainly offered for a snack or as a dessert, but grandparents or grandmothers frequently offer ice cream, cookies, sandwiches, sugary yogurts, among others, we will notice how more and more they will ask us for these options. If instead, grandparents and grandmothers share more fruits with their grandchildren, they will reinforce the habit of snacking on fruit, and it is much more likely that it can be maintained until our little ones are adults.

JLL. It is important that the family works, since it is the nucleus of all growth and education, values ​​for life, customs, but it would be wonderful if the environment (schools, parks, advertising) also complemented it.

P. What do we do if one part of the couple agrees with what their parents are doing, or downplays it, but the other does not?

JLL. Dialogue and try to reach an understanding by both parties. Do not forget that the end is the same: to breed in the best way that we know how.

MG. Yes, I would recommend keeping the conversation open and negotiating as you go. Perhaps in some moments it will be necessary to give in to maintain a good atmosphere at the table, in others other strategies can be used to reach a middle ground.

P. Are we always in time to change eating habits if the grandparents are encouraged or once certain customs are established is it more complicated?

MG. There is always time to improve, but the sooner we are aware of what we want to sow and achieve, the easier the path will be. For example, it will be much easier for our little ones to be adults who eat consciously and listen to their satiety signals if we respect their appetite while they were growing up. If instead, we insist or distract them with screens so that they eat, it is very likely that as adults they will have to make an effort to recognize those signals again. The same thing happens with the reeducation of the palate to the flavors of food without sweetening or without adding large amounts of salt: the less we have to go back, the easier it will be.

JLL. For the simplest: understand what role food plays in our lives.

MG. It all adds up and when we see that there are small changes that are easy to implement, we can find more motivation to keep going. You may find it easier to include a piece of fruit in your snacks, perhaps prioritize whole fruit over juices, or perhaps change the sandwich filling (if unhealthy options are often used). Any of these actions will be beneficial and we will have time to move forward. The rhythm will be set by each family.