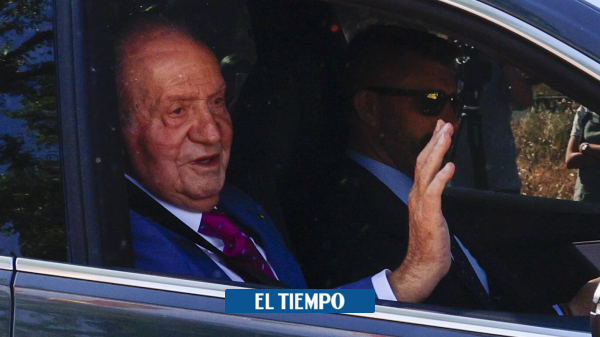 Juan Carlos I visits this Monday in Madrid to the current king, his son Philip VIfor a family day that will put an end to a first and controversial visit to Spain after almost two years abroadstalked by suspicions of corruption.

(You may be interested: Juan Carlos I makes his first public appearance after his arrival from exile)

The emeritus king arrived at the Zarzuela Palace around 10 am (local time).confirmed the AFP, coming from the Galician town (northwest) of Sanxenxo, where he arrived on Thursday to spend the weekend attending a sailing competition, his favorite sport.

(In context: The return of the emeritus king makes the Spanish Crown uncomfortable)

Since he went to United Arab Emirates in August 2020when he was suspected of money laundering and corruptionJuan Carlos I had not personally seen his wife Sofiafrom whom he was already estranged, and to his son, who has since tried to distance himself from his father.

I think that in these days of visit, King Juan Carlos has missed an opportunity to explain and apologize

See also  Biden, after the massacre in Texas: "We must act against the lobbies"

The investigations were archived, among other reasons, due to the inviolability of the previous head of state and because the possible crimes had prescribed, something that exacerbated the controversy over his return.

(Also read: What are the scandals that dot King Emeritus Juan Carlos I?)

“I think that in these days of visit, King Juan Carlos has missed an opportunity to explain and apologize“, lamented this Monday the spokeswoman for the leftist government, Isabel Rodríguez, in statements to public radio RNE.

Felipe VI never visited his father in his exile and, officially, he never spoke on the phone with him until last week, when they agreed on this visit that will conclude with the return to Abu Dhabi on Monday by private jet after this family day to which the Royal House gave the rank of private.

Juan Carlos I already has a date for his next trip: it will be in mid-June, again in Sanxenxowhere he stays at the house of his friend and sailing partner of the “Bribón” team, Pedro Campos.

Juan Carlos I in his first public appearance in Spain

The return to Spain has been a thorny issue. The newspaper The country reported this Monday that it was preceded by three months of negotiations between Felipe VI, the government and Juan Carlos I, helped by a mediator whose identity was not disclosed.

In 2014, Juan Carlos abdicated in his son, and justified his exile in Abu Dhabi in the need to “facilitate” the work of the new monarch

In them, the government opposed the previous monarch sleeping in the Zarzuela palace on his return, as it is the official residence of the head of state, something that he will not do.

In Sanxenxo, Juan Carlos made some brief statements on the fly, when he entered or left the yacht club, which did not go unnoticed.

“Explanations of what?“, he replied curtly on Sunday when asked if he was going to talk to his son about the issues for which he was investigated. “What am I going to tell him? What would you say to your son?” He launched a journalist who asked him what they were going to talk to Felipe VI about.

In 2014, Juan Carlos abdicated in his son, and justified his exile in Abu Dhabi in the need to “facilitate” the work of the new monarch. In March 2020, Felipe VI renounced his father’s inheritance and withdrew his annual allocation of almost 200,000 euros.

More recently, at the end of April, he launched a “transparency” operation with the Sánchez government in the Royal House, which must now audit its accounts, make its contracts public or take an inventory of the gifts received.

“Felipe VI is doing a formidable exercise to recover that essence in a State institution, which is transparency, which is exemplary,” the spokesperson for the Pedro Sánchez government congratulated.

NGO, Russian UN adviser resigns: “I have never been so ashamed of my country. Lavrov? An excellent system degradation "