José Sand, the scorer who risked his life to earn a cow 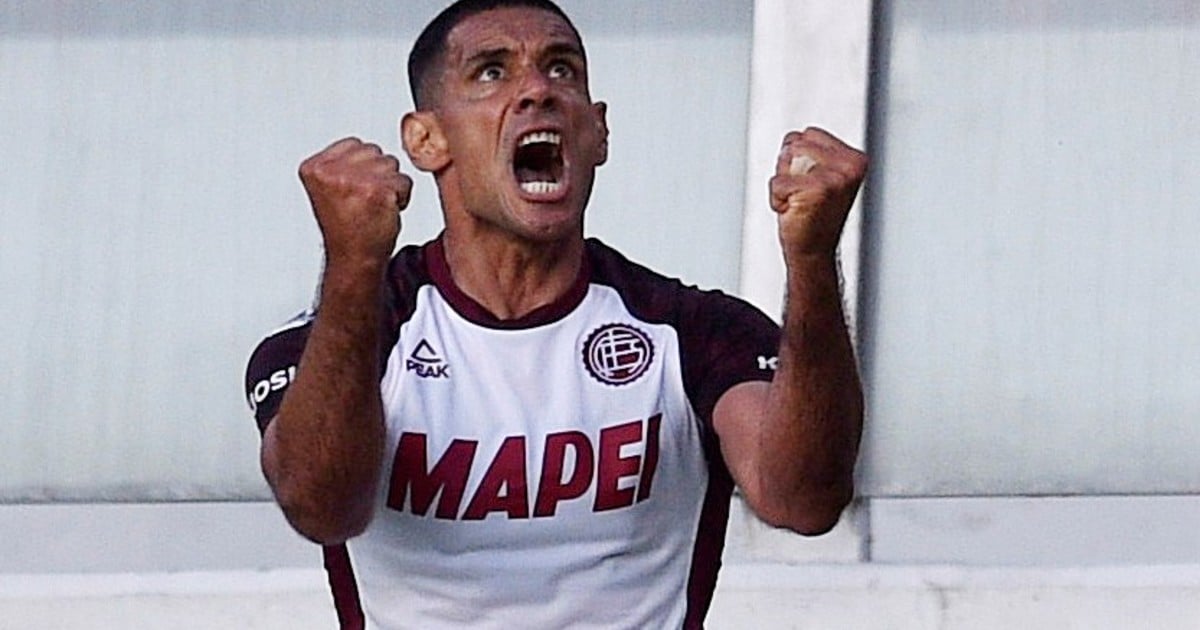 When on September 12, 1999, José Sand ran wildly, with his arms forward, his fists firm and his face stretched out to the maximum to shout his first goal in Primera (with the Colón shirt and against Gimnasia), that same day Nicolás Orsini, the man with whom he will share the Lanús attack on Saturday in the South American Cup final, was five years old.

The date of Pepe’s goalscoring debut is even more relevant if it shows that eight of his current teammates on the squad (Lautaro Morales, Nicolás Aguirre, Alexandro Bernabei, Pedro De la Vega, Julián Aude, Franco Orozco, Gonzalo Torres and Pablo Aranda) or They had been born when the man from Corrientes had already been the top scorer in River’s youth teams and at the age of 19 he was starting to get out of him and played on loan at Colón.

“Do you know why I shout goals so much? Because it is not easy to score goals, people think it is easy,” defines Pepe.

José Sand poses next to the statue of Lautaro Acosta that is in the Lanús club. (Photo: Clarín Archive / Rolando Andrade Stracuzzi)

José came home with a headache. He went to sleep but couldn’t. He suffered. He thought that he should have thrown himself better, that he had not reacted in the best way. And worse: he thought the team had lost because of him.

He was 10 years old and had a legacy. That is why, reluctantly, he put on his gloves and stood under the crossbar of the arch of the Barrio Norte club in Bella Vista, Corrientes. Like his dad.

“It made me very nervous and when they made me foolish goals I would cry. At night my head hurt a lot, I couldn’t sleep because of my nerves, ”he remembers and frowns.

It was his mother who took him out of the goal and freed him from the goal problem. Or so he intended.

Now José is 40. Although the obsession with the goal is the same.

—How many games can you endure without scoring a goal?

He played a year in Colombia for Deportivo Cali and every time he scored a goal his teammates came up to him to invite him to dance. “They wanted to take a little step, I don’t know what. I first yelled it like crazy and then we did something. ‘Come on, let’s dance,’ they told me. Do not leave me. I get so happy when I score a goal that I run everywhere ”.

When the Pepe remember childhood in Corrientes football appears full time. He went to train at the club and then played penalty shootouts. But the biggest challenge came on the weekend when they played for a cow.

“Each town assembled its team and went to compete in the field. A whole cow was at stake, we were risking our lives. We killed each other. It was terrific. We win it two or three times. But it was difficult, we were wild. “

From playing for a cow on the outskirts of Corrientes, he jumped to Buenos Aires, tried himself in River and began to live in the club’s pension. Besides playing, he worked: he took photos to make membership cards and was secretary in the president’s office. He would open the door for Alfredo Davicce, or he would carry envelopes with invitations.

His other story with the red band is well known: he broke it in the inferiors and could not make his footing in the First Division. He returned every year and listened as the technician on duty told him that he was not going to be taken into account and again he packed his bags.

The first of those loans went to Colón. At the age of 18 he passed from house to house. I lived for a week in Hernán Díaz’s, one in Julio Toresani’s and another in Pampa Biaggio’s. He had no choice but to tan.

He went to Independiente Rivadavia de Mendoza, to Vitória in Salvador de Bahía (Brazil) and from there to Defensores de Belgrano. He played in the United Arab Emirates, La Coruña and Tijuana. He returned to Colon, passed through Banfield. He took a wrong step in Racing. He was unable to take flight in either Tigre or Argentinos. Until it resurfaced. Boca Unidos, first, and Aldosivi, later, gave him back his hunger. But his house is in Guidi and Cabrero. And although his last name is not yet a street, he is at the height of the highest garnet glories.

Jose Sand scored against Boca in 2007 for Lanús’ first title

Sand is the top scorer in the club’s history: with 132 goals (in 214 games) he left Luis Arrieta (120) behind. The enlarged numbers of the Corrientes impress even more. He adds 176 goals between the 7 teams he played in the First Division and another 98 between Ascenso and abroad. And if that wasn’t enough, he had the luxury of celebrating in four different decades.

But to face the last great challenge of his career and seek the dream of lifting the Sudamericana on Saturday in Córdoba against Defense and Justice, there was a story of reconciliation before.

It was exactly three years ago. January 2018. It seemed to be the end point of the love relationship between Sand and Lanús.

The scorer was annoying. Beyond an irregular moment and the usual balance that clubs draw when a cycle ends, Pepe was bothered by something more painful. “I was very angry that the president did not value me. I had six months left on my contract and I didn’t want the club’s doors to be closed on me. I thought inside: ‘they won’t do it to me’. You try to be as fair as possible and I knew I could go on. The footballer knows when his career is over or when he has more to give ”.

The door slammed. And it rumbled in the presidential office of Nicolás Russo. Each goal from Corrientes in Colombia was tilting an arm wrestling that was played in silence and from a distance.

“It seemed impossible to go back,” Sand admitted. I thought the president was not going to apologize. But hey, he had the courage to apologize and that changed everything. Luis (Zubeldia) had already called me several times to come back, but I always told him the same thing: let the president come out and apologize publicly ”.

The return of Zubeldia to put the body when the team fell down a slide and the descent averages appeared, Russo’s apologies to recognize that he had erred in the diagnosis with the idol, a spontaneous flag from the fans to push at an adverse moment, the return of Sand and, above all, the return to the formula that gave so much fruit to the club: to bet on the inferiors and support the growth of the kids with leaders of the house. There are the foundations of this new garnet dream in search of the seventh star.

Against Defense and Justice will not be Lautaro Acosta, suspended. The Laucha is immortalized in a strategic place in the garnet life, its statue bursts into the internal streets that link the stadium with the sports center fields.

The one who will lead the group in line in the final will be Pepe Sand. The captain of the four decades. The one who scored the goal in the Bombonera to embroider the maroon shield with the first star in 2007 with Ramón Cabrero at the wheel and Zubeldía as a companion. The same Sand who a few months ago dreamed of the perfect end to his story by lifting the South American Cup.

Although if it is consecrated, who could assure that the stainless scorer will not dare to one last dance in the Club World Cup and go from playing for a cow in Corrientes to facing the best team in the world in Abu Dhabi.

Future of the Champions League: The tough fight for big money

Newcomers in the crisis: Bielefeld apparently separates from coach Neuhaus