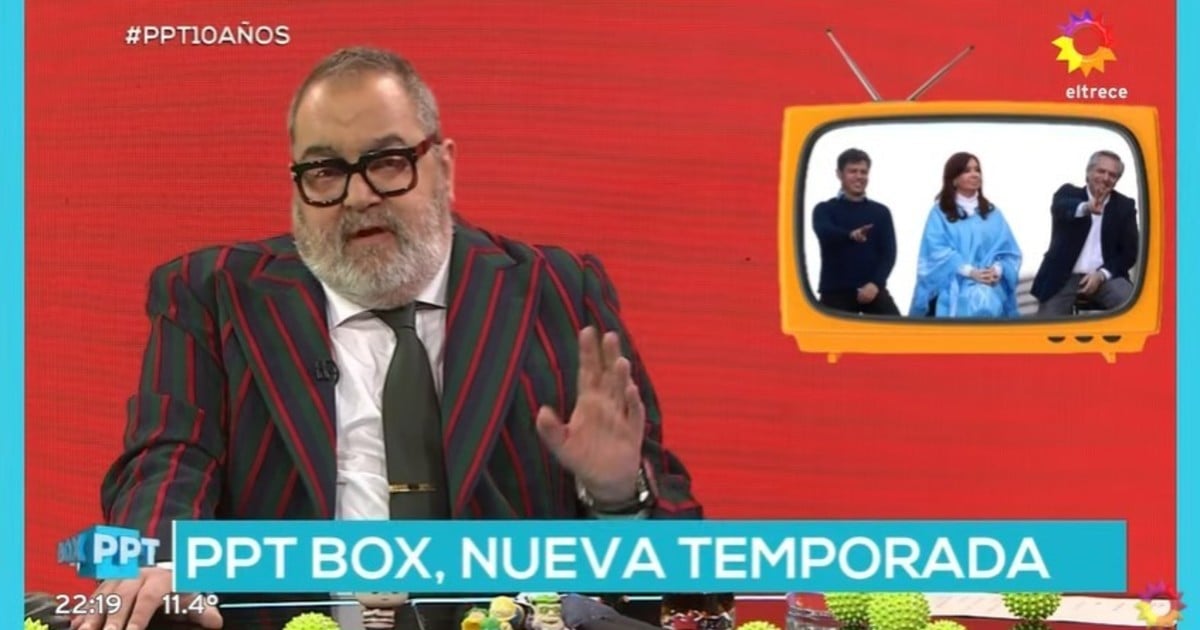 And Jorge Lanata came back.

.It was little more than six months of the last broadcast of 2020 of Journalism for All. Recovered after his trip to the United States – where he was hospitalized and vaccinated against the covid – Jorge Lanata began his tenth year of Ppt, in format Box, with his traditional monologue in which he centrally pointed with irony to the national government for the managing the pandemic and purchasing vaccines.

“We have not seen each other in PPT for more than six months. The last time we were all crazy and worried about the coronavirus and the Government promised that millions of vaccines were going to arrive, but in the meantime he asked us to stay locked up at home. Well, everything is the same… “Lanata fired at the start.

He continued: “Today is the last day of phase 1 and tomorrow (on Monday) we return to phase 2 which is similar to phase 1 because we can leave, but still we don’t go out because we don’t have money we are in phase 3 and 4 “.

Lanata said that in reality “something did change” and that is that Ginés González García is no longer the Minister of Health of the Nation, ejected from his post last February after the scandal over the so-called “Vip vaccination”.

Ironized: “After all the quilombo of the vaccine choreography and the VIP vaccination was (Carla) Vizzotti as minister. And within the Government there was much talk of a great betrayal of Vizzotti on that issue. Be careful: the betrayal did not go to Ginés, it went to the Filomena clown, whom he did not take as vice minister as many expected “.

Who was the clown Filomena? Let’s remember: it had been news in August 2020, in the framework of one of the reports with the figures on the coronavirus. It was when the Ministry of Health presented it due to Children’s Day and generated a stir on social networks.

That day – to the daily panel made up of the then Secretary of Access to Health, Carla Vizzotti, the Undersecretary of Health Strategies, Alejandro Costa- Filomena the clown joined, one of the members of the children’s group “Back Cinnamon”.

The truth is that following this tone, Lanata showed that during the videoconference between Alberto Fernández and Vladimir Putin -for the Argentine production of Sputnik V- the Argentine president is heard saying that “In Korea it is full of Peronists.”

“More than a year passed from the quarantine and the video calls and zooms everywhere. Our balls are already swollen !, but at least we became a little expert on the subject. Everyone except Alberto, who still has not learned to close his microphone. Mute it, Alberto!“Lanata finished.

It was to be expected: the host of Journalism for All plunged into the controversy surrounding the negotiation with Pfizer.

Lanata did it remembering the words of Carla Vizzotti, who pointed out days ago that the opposition is “obsessed“with the theme.

It was after Patricia Bullrich spoke even bribes behind that failed negotiation (which is why the head of the PRO was brought to justice by the president).

“So what are we going to do?” Lanata said provocatively. Let’s talk about Pfizer“.

Then the journalist said in a parody tone: “The relationship with Pfizer resembles a Chinese story or, rather, a children’s story, which could be titled: ‘Little Red Riding Hood Vizzotti and the Wolf Pfizer’ “.

About the vaccination campaign and those killed by coronavirus. With a total of 81,214 deaths, Argentina ranks 13th among those with the most fatalities globally.

Lanata was blunt in that the Government “did not prepare for the second wave nor did it have a vaccine stocking strategy. “

“Do you know how many more vaccines we could have had if the Government had negotiated better? The total number is impressive: 96 million more doses the one we have today, “Lanata said after showing a plaque.

He added: “In May, in Argentina, there were almost twice as many deaths from covid than in April when the second wave started. And they continue to rise: this week, the average was again above 500. In one month the number of people admitted to intensive care increased by 44% “.

“Why are we like this?” He wondered. Because we don’t vaccinate enough so far, despite government promises. “

Finally, Lanata observed that in Chile, as a result of the vaccination rate, “between April and May, deaths on average fell 11%.”

“If the same thing had happened in Argentina, the average deaths per day in May should have been 235. But they were 459. We are talking about how many lives could have been saved. If in Argentina things had been like in Chile, we would have 6,600 fewer deaths “, Hill.

In the monologue, complaints were interspersed, in reports by journalists Manuel Jove and Cecilia Boufflet, about surcharges in contracts from the Ministry of Social Development with a cooperative linked to Juan Grabois and the basic units of La Cámpora that PAMI made pass as retirement centers.