Jordan eases restrictions after the decline in Corona injuries 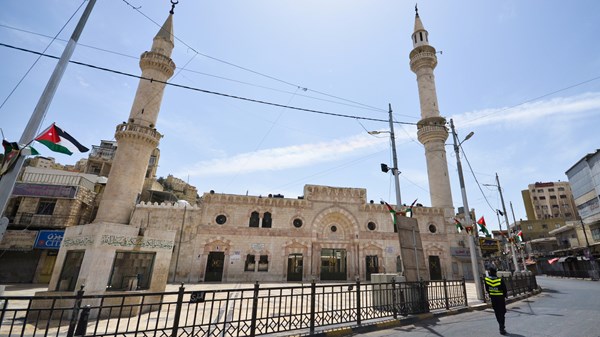 The Jordanian government decided to allow the performance of Friday prayers after the Kingdom witnessed a significant decrease in the number of new infections with the Corona virus during the past few weeks.
A statement issued by the Council of Ministers said, “The Council decided, during a session held on Sunday evening to discuss developments in the epidemiological situation, to allow people to go out to perform Friday prayers on foot, for a period of one hour to be determined by the Minister of Endowments and Islamic Affairs and Sacraments, provided the worshipers adhere to the approved health protocol.”
The decision will take effect from next Friday, and Friday prayers will continue for one hour despite the curfew imposed on Fridays.
Last week, the government decided to “allow citizens to go out on foot, for a period of half an hour, to perform the Fajr and Maghrib prayers during the blessed month of Ramadan, provided the worshipers adhere to the approved health protocol.”
On the tenth of last March, the government decided to prevent the holding of Friday prayers after recording an increase in cases of Covid-19, as it reached that day 6,649 injuries and 60 deaths.
But injuries began to decline for weeks, as today, Monday, 3,509 injuries and 62 deaths were recorded.
Universities and schools are still closed in Jordan, where distance education is adopted for most educational levels, while weddings and funeral councils are prohibited.
Jordan also required residents to wear masks in markets and public places.

For Axel Kicillof, the failure that enabled classes in the City 'is disgusting'

Justice League is the most watched movie in China and surpasses Avengers: endgame