Joe Biden’s inauguration: Trump left for Florida, but in Washington they already debate his future in Congress 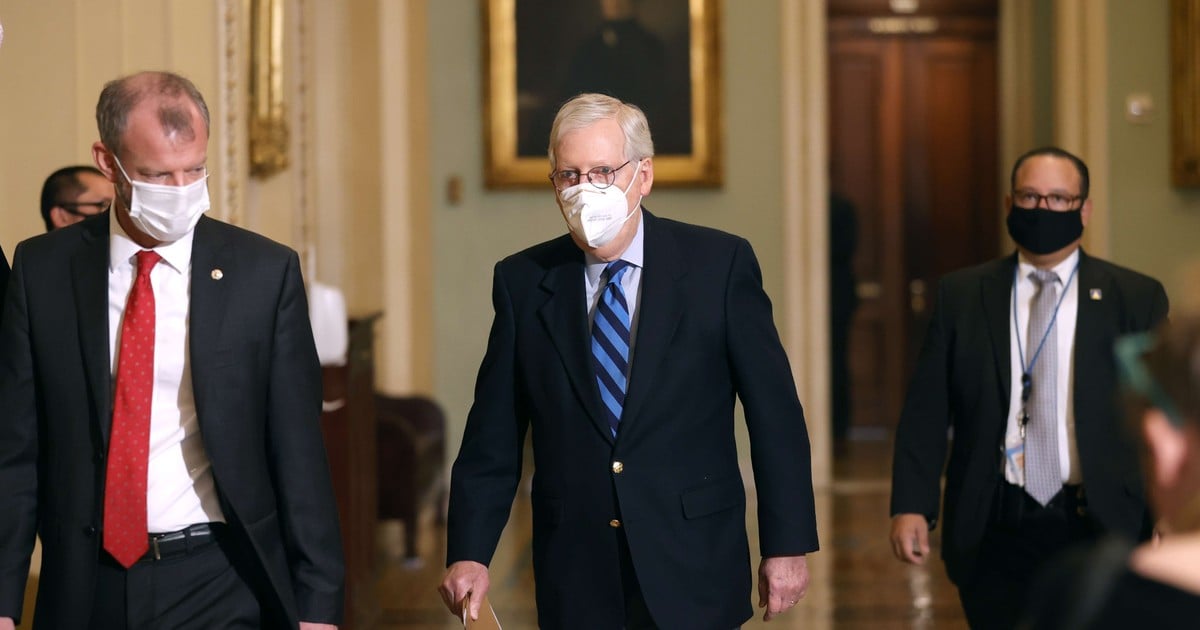 Donald trump He boarded Marine One first this Wednesday and said goodbye for the last time to the White House gardens. Then he boarded Air Force One and said goodbye to his presidency for the last time before a small group of supporters and family members. He promised to return. But that possibility remains to be seen when the Senate debates at this time his future when deciding whether or not to condemn him in a impeachment, by the assault on the Capitol.

Tuesday, January 19, Trump’s last full day in power, ended up being a day of reverse impressions for the outgoing president and the Republican leader of the Senate, Mitch McConnell.

As the New York mogul went through the last full day of his presidency, McConnell and the senators fulfilled their first day on the job after the violent assault on the Capitol, impeachment in one hand and confirmation hearings from the president’s cabinet. starter Joe Biden, on the other.

McConnell started the session Tuesday by pointing an accusing finger against Trump and lashing out at him in a way that had never done so far: claimed that the Trumpist mob that stormed the Capitol heard the “lies” of the outgoing president and others to launch the insurrection in an attempt to overturn the election of Democrat Joe Biden.

McConnell had never rebuked the outgoing president of so intense and public way. He promised a “safe and successful” inauguration of Biden on Wednesday at the Capitol, which is surrounded by extreme security measures.

“They fed lies to the mob, ” McConnell said.” They were provoked by the president and other powerful people and tried to use fear and violence to stop a specific process from the first branch of the federal government that they didn’t like. ”

McConnell recalled that former President George HW Bush called the western facade of the Capitol the “front yard of democracy” and said that after Biden’s inauguration there, “we will move on.”

Three Democratic senators-elect will be sworn in on Wednesday shortly after Biden’s inauguration. The new senators will give the Democrats the smallest of majorities: 50-50, in which the vice president Kamala Harris will have the deciding vote In case of a tie.

US President-elect Joe Biden at a mass prior to his inauguration. Photo: AP

The leaders of both blocs, McConnell and Democrat Chuck Schumer, will meet in the next few hours to discuss the steps to be taken, said a person familiar with the plans and who spoke on condition of anonymity.

The start of the new session of Congress will force senators to accept that Trump is no longer there and that it is a transfer of power like almost no other in the country’s history.

Senators return to a damaged Capitol. At once, the Senate is paralyzed by the extreme partisanship of the legislators.

Republican senators face a difficult decision: to convict Trump for inciting the insurrection, which means breaking relations with a defeated president who retains great influence on the party base, although his future is uncertain.

In addition, senators must initiate confirmation of Biden’s cabinet and decide whether to approve a draft $ 1.9 trillion COVID-19 bailout bill.

US Vice President-elect Kamala Harris will be the tie-breaking vote in a divided Senate. Photo: AFP

In his first statements at the confirmation hearing, the nominee for Secretary of National Security, Alejandro Mayorkas, promised To investigate thoroughly the “horrendous” attack on the Capitol.

Mayorkas told the Senate National Security Committee that, if confirmed, he will do everything possible to ensure that “the desecration of the building that constitutes one of the three pillars of our democracy and the terror felt by you, your colleagues, your staff and everyone present will not happen again. ”

Five of Biden’s appointees had their hearings scheduled for Tuesday, as the Senate prepares to confirm some immediately after the president-elect is inaugurated.

This is common, especially in the case of the White House national security team.

Biden wants the Senate to address the confirmation of his appointees, the COVID project and the impeachment of Trump, something difficult for a institution accustomed to proceed slowly and with bitter confrontations.

Coronavirus The researcher compared mortality during a pandemic: Sweden is one of the least surviving European countries