Joe Biden’s inauguration: the president who vows to restore calm to a troubled America 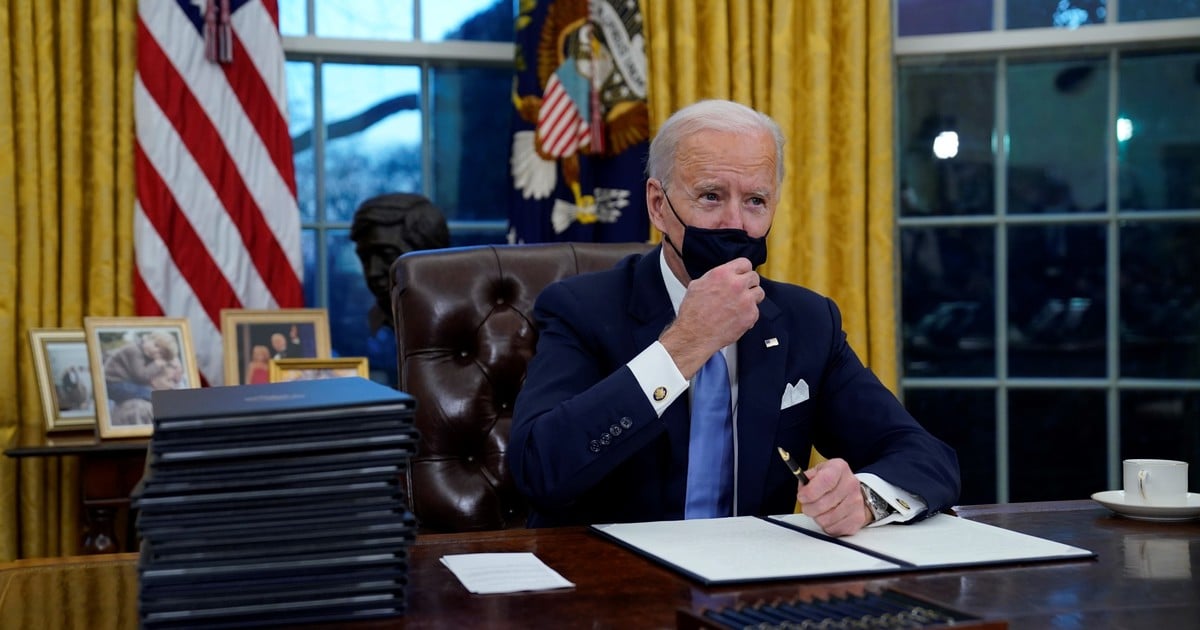 “We have a lot to do in this winter of danger and possibility. Much to repair, much to restore, much to heal and build. And a lot to gain ”. Joe Biden installed himself in the White House on Wednesday with a message of unity and hope. But what comes next will not be easy. He knows.

The new president of the United States faces immense challenges. His experience of almost five decades in the political scene will be key to face them. Your ability to adapt in times of adversity may help you.

Over the past year, he has been criticized for being too entrenched in Washington, too reluctant to campaign during the pandemic, and too old. At 78, he is the oldest man to reach the presidency of the United States.

But Biden prevailed over the skeptics and won the November elections, although Republican Donald Trump did not recognize him and left without greeting, in a historic snub in the United States.

Biden has no time to waste. He already demonstrated it in his first hours in the White House, where he signed several decrees with which he largely seeks to reverse the legacy of divisions and rancor left by his Republican predecessor.

Precisely, during the campaign, the former president of Barack Obama he showed himself as the “quiet” man, in the face of the furious and defiant figure who pulled the strings of the country for the last four years.

Joe Biden and his wife Jill, this Wednesday, arriving at the White House in Washington. Photo: REUTERS

Joseph Robinette Biden Jr. was born on November 20, 1942 and grew up in Scranton, Pennsylvania, in a very Catholic family of Irish origin. The now president often remembers his father, a car salesman who lost his job in the 1950s. And he shows himself as the “middle class” man, compared to the millionaire who has just left the White House.

The family moved to the neighboring state of Delaware when he was 10 years old. “My dad always said: ‘Champion, when they knock you down, you stand up,'” he once said.

In Delaware, Biden worked as a youth as a lifeguard at a black neighborhood swimming pool. There saw inequality and discrimination suffered – suffer – by minorities in their country.

Although he suffered from severe stuttering as a boy – today he prides himself on helping others “from the same club” – he soon entered a political career, graduating from the University of Delaware and Syracuse University School of Law.

He entered the national political arena at age 29, winning a seat as a senator from Delaware in 1972.

Notable dates in the life of Joe Biden. / AFP

But a month later, a tragedy struck him: his wife Neilia and their one-year-old daughter Naomi died in a car accident. Their sons Beau, four, and Hunter, two, were seriously injured.

Biden met his second wife, Professor Jill Jacobs, in 1975. They married in 1977 and had a daughter, Ashley. The two sons recovered and Beau followed his father into politics – he became Delaware’s attorney general and was emerging as a rising figure. But a brain tumor killed him in 2015, at age 46.

Biden often highlights the support of his wife, 69, the woman who “reunited” his family.

Although he lives with the pain after Beau’s death. “It never goes away,” he said. This loss did rule out a presidential candidacy in 2016, after unsuccessful attempts in 1987 and 2008.

From 1972, and for the 36 years after, he was a senator from Delaware, where he lived until this weekend. He was only absent from the bench in the eight years that he accompanied Barack Obama as vice president, from 2009 to 2017.

Biden’s message during last year’s atypical campaign was largely based on mentioning his “friend” Obama, who accompanied him at some events before the election. And in his ability to negotiate with many world leaders. “I know these guys,” he used to say.

Joe Biden, a Catholic, attended a religious ceremony on Wednesday before assuming the presidency. Photo: REUTERS

his moderate policy proposal At a time of great polarization, he was balm to an exhausted electorate from the scandals and chaos in the Trump White House. But Biden also vowed to take progressive action on climate change, racial injustice and relief from college student debt.

His campaign seemed headed for disaster in early 2020, following disappointing losses in the Democratic primary to the fiery, much more radical Bernie Sanders.

But Biden, whom Obama called a “lion of American history,” came roaring back to the inmates in South Carolina thanks to the overwhelming support of black voters, a crucial base for every Democrat. And he got around several more obstacles until the official candidate was nominated.

Almost every Sunday before moving to Washington, Biden attended Mass at St. Joseph on the Brandywine, a historic church in his affluent Wilmington neighborhood. There, in the cemetery, rest his parents, his first wife and daughter, and their son Beau, under a tombstone decorated with small American flags.

Some time ago, Biden confessed how much Beau influences his life. “Every morning I wake up and ask myself: Would he be proud of me?”

Schools put to the test of the health crisis. A place of investment for the future