Joe Biden stomps on Asia and North Korea responds: ‘Don’t make a fuss if you want to sleep peacefully these four years’ 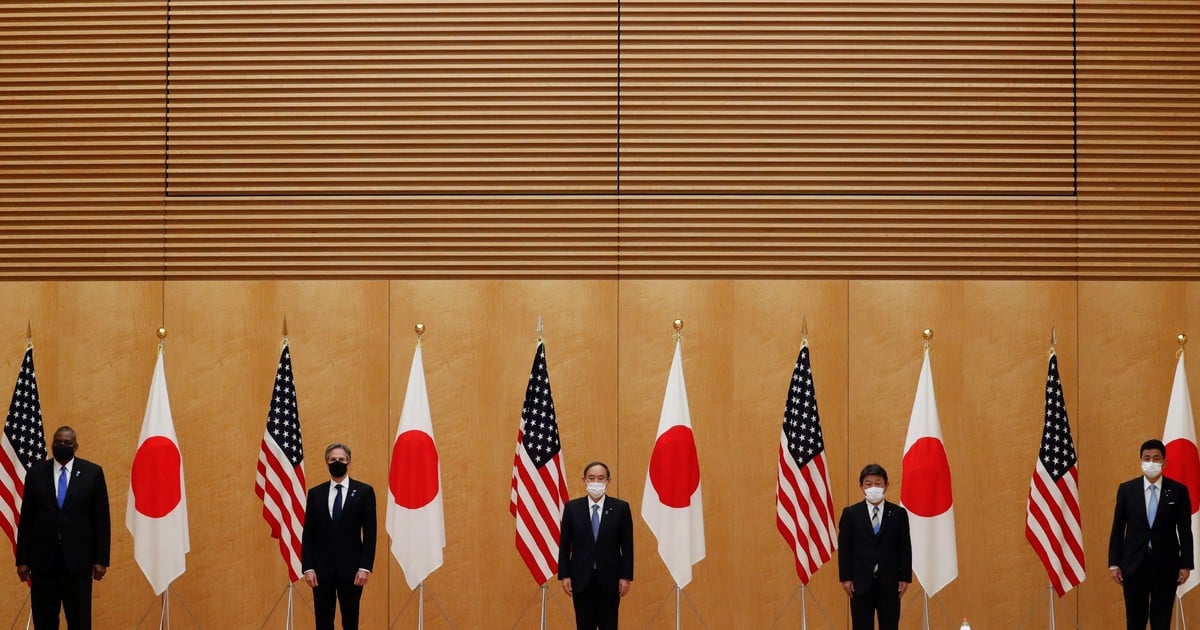 Joe Biden decided to stomp in Asia with one goal: safety. He first sent his Secretaries of State and Defense on a flight to Tokyo and then to Seoul Anthony Blinken and Lloyd Austin. North Korea took advantage of their visit to send its first direct message to the US: “Don’t make a fuss if you want to sleep soundly for the next four years.”

Blinken and Austin, who are due to arrive in Seoul on Wednesday, met with their Japanese colleagues Toshimitsu Motegi and Nobuo Kishi. And in chorus, they warned China that they will respond to their “coercion and aggression” in the Asia-Pacific region.

Tokyo and Washington identified China as one of the main “military, political, economic and technological challenges” facing both their bilateral alliance and the international community, in a joint statement presented at the end of the meeting.

The meeting took place within the framework of the first diplomatic tour of high-level ministers of the Biden administration, who employed alongside their Japanese counterparts a much more forceful tone against China which had been common in their bilateral appointments.

On Wednesday it will be the turn to target North Korea. But before this happens, Pyongyang was quick to speak first.

The warning came from the top of the Pyongyang regime: Kim Yo-jong, the all powerful sister of Kim Yong-un.

In a statement, Kim threatened to break a military pact with South Korea in protest at the military maneuvers coming between Seoul and Washington (an annual practice in the region that always arouses angry reactions in the North) and threatened the Biden government with resume your weapons tests.

Taking advantage of the presence of US officials in Japan, Kim charged against the regular spring exercises – exercises based mainly on computer simulations – that South Korea and the US began last week and mainly protested Seoul’s attitude.

He warned the South to take measures “such as the breaking of the military pact inter-Korean “, an important agreement signed in 2018 by Kim Jong-un and the southern president, Moon Jae-in, to reduce actions and military assets around the border to reduce tension in the peninsula.

He also warned the new US administration “If your desire is to enjoy a pleasant sleep for the next four years, it would be wise not to create a scandal that makes you lose sleep,” wrote the leader’s sister in clear reference to the restart of the tests of weapons of mass destruction to which the regime already referred in January.

Despite the fact that the scale of the current military exercises – which will last until March 18 – has been greatly reduced due to the pandemic and in order not to stir up the spirits of Pyongyang, which considers it a test to invade its territory, Kim considered that Seoul has “dared to pose a significant challenge to us.”

The leader’s sister, deputy director of an important propaganda organ and one of the spokespersons for the regime since 2020, estimated that “the essence and nature of the exercises against compatriots in the North never change despite any variation in their forms.” .

Future strategy for the peninsula

Beyond the exercises themselves, Kim’s message seems primarily intended to warn Seoul and Washington about the future path to be adopted by the US secretaries of state and defense when they arrive in Seoul this Wednesday.

The visit of both is considered crucial for coordinate and finalize what will be the new strategy of the White House and its regional allies to face the North Korean nuclear issue.

In this regard, Blinken said from Tokyo that the “North Korean threat will be managed collectively”, hinting that Biden will seek more multilateral coordination than his predecessor in this area.

The threat of Kim Yo-jong is the first direct message that Pyongyang sends to the government of Joe Biden since he was inaugurated in January and comes after it was learned that Washington has been trying to communicate without success with the regime for a month.

Tuesday’s message seems to indicate that the hermetic Asian country will keep this defensive and defiant attitude waiting for the new US government to make its first public statement on its new plan to negotiate peace on the peninsula.

China in the crosshairs

The tone with China is stronger. Japan and the United States accused Beijing of being “inconsistent with the international order”, and noted in particular the “disruptive activities in the region” carried out by the Chinese Coast Guard or their “illegal claims” affecting several countries in the disputed South China Sea.

Beijing also maintains a prolonged territorial dispute with Japan for the sovereignty of the remote Senkaku Islands (known as Diaoyu in China), administered by Tokyo but claimed by the neighboring country, and in whose waters there have been frequent skirmishes between Japanese troops and ships. Chinese.

The American and Japanese ministers signaled their opposition to “any unilateral action that seeks to change the status quo or undermine the administration” of those uninhabited islands.

This long list of complaints against Beijing was accompanied by a warning from the United States and its main Asian ally, which “will push China back if necessary if it uses coercive actions to impose its will,” according to the head of US diplomacy. .

New priorities for the US

The visit to Tokyo as the first stop on Blinken’s debut diplomatic tour comes four days after a telematics summit between Biden and the leaders of the India, Japan and Australia which was also focused on unifying a front against China.

After the previous period marked by Trump’s “America First” policy and uncertainty about Washington’s traditional alliances, the new US administration aspires to “reinvigorate” your relationship with key partners as is the case in Japan, said the US Defense Secretary.

“In the last decade, we have necessarily focused on problems in the Middle East. And meanwhile, China modernized its military and maintained aggressive and sometimes coercive behavior, sometimes against our allies in the region,” Austin said.

“Our goal is to ensure that we maintain a competitive advantage against China or any other actor that poses a threat to our alliance,” said the retired four-star general.

Free, bilingual and with a barcode: this is the vaccination passport projected by the EU

Sánchez: «The flag of freedom will never be held by the duo from Plaza de Colón»