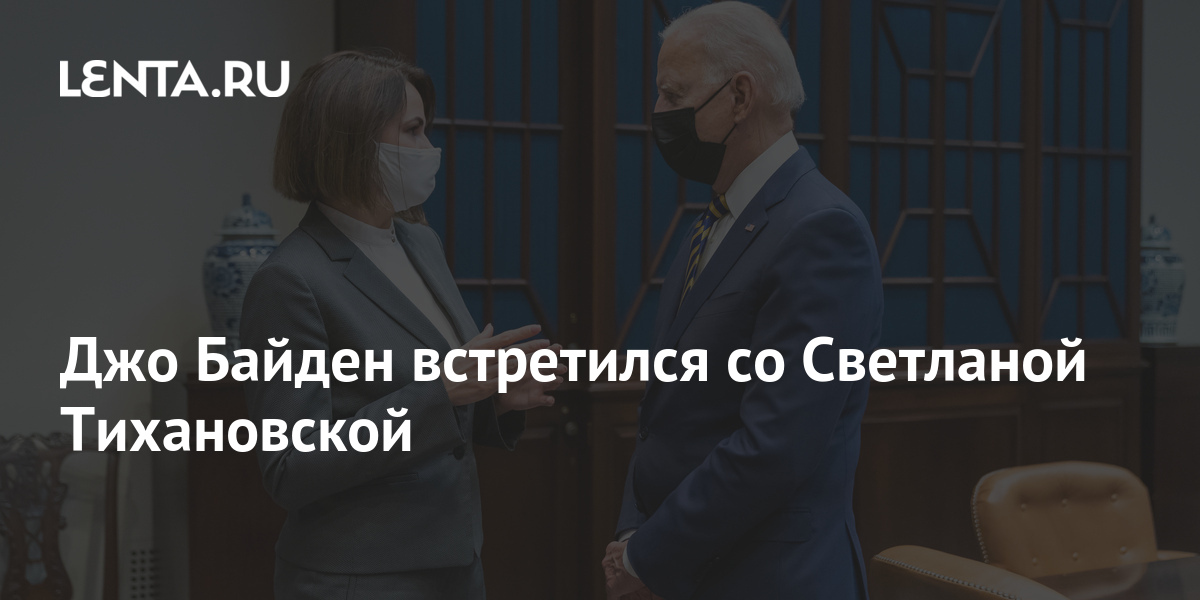 US President Joe Biden met with the leader of the Belarusian opposition Svetlana Tikhanovskaya. This is reported in Twitter-American leader’s account.

The meeting took place on the morning of July 28 at the White House. “It was an honor for me to meet Svetlana Tikhanovskaya,” Biden wrote. He noted that the United States “supports the people of Belarus in their quest for democracy and universal human rights.” Tikhanovskaya herself, in turn, thanked American President for “a powerful sign of solidarity with millions of fearless Belarusians who are peacefully fighting for their freedom.”

Today Belarus is at the forefront of the battle between democracy and autocracy. Peace be with us. Belarus will be a success story

Leader of the Belarusian opposition

Speaking about the meeting with Biden, Tikhanovskaya said that she asked him to help Belarus make a “non-violent transition to democracy” and support political prisoners. At the same time, she did not indicate whether specific agreements were concluded between the Belarusian opposition and Washington during the talks. The American side has not yet disclosed the details of the meeting.

Svetlana Tikhanovskaya announced her plans to meet with Joe Biden on July 18. At the same time, the day before in the White House itself, it was difficult to answer the question about possible negotiations between the leader of the Belarusian opposition and representatives of the United States. The press secretary of the White House Jen Psaki even asked the media representatives if the Belarusian politician had explained to them with whom she was planning to meet.

Already on July 19, Psaki announced that there was no meeting with Tikhanovskaya in Biden’s schedule. Despite this, the White House representative noted that the leader of the Belarusian opposition will meet with various high-ranking officials of the US administration while she is in the country.

Svetlana Tikhanovskaya arrived in the United States on July 18. In addition to meeting with Joe Biden, she spoke with US Secretary of State Anthony Blinken, Biden’s National Security Advisor Jake Sullivan and US Ambassador to Belarus Julie Fisher.

As the Belarusian politician said, during the talks, the sides touched upon the issues of increasing sanctions pressure on President of Belarus Alexander Lukashenko, increasing the package of assistance to repressed Belarusian citizens and journalists, as well as punishing all those involved in political crimes in the country. According to her, Washington made it clear that in the near future “decisive steps will follow” towards the current Belarusian leadership.

At the same time, in Belarus itself, Tikhanovskaya’s visit to the United States was reacted with skepticism. The country’s foreign ministry called it a tourist trip, funded by American taxpayers. The press secretary of the department Anatoly Glaz stressed that such visits are inherently meaningless and do not influence the policy of the Belarusian authorities.

The Permanent Representative of Belarus to the UN, Valentin Rybakov, even harshly warned foreign colleagues against meeting with the former presidential candidate of the republic. He recalled that the UN adheres to the fundamental principle of “one country – one vote” and asked to take this fact into account. Therefore, such visits will inevitably affect the relations of Minsk with other states and delegations in the organization, Rybakov stressed.