Japanese consul to the US doubles origami during a pandemic year 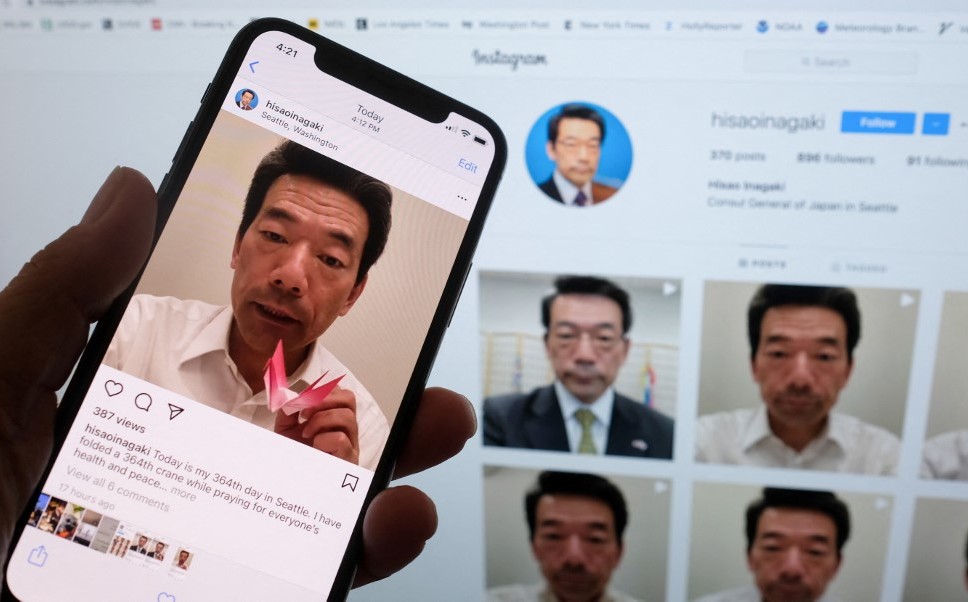 For a year, a Japanese diplomat in the United States posted a virtually identical video on his Instagram account every day: a year of origami cranes to wish everyone health and peace.

“Today is my 365th day in Seattle”, begins by saying Hisao Inagaki, consul general of Japan in the city of the western United States, in a video published this Friday in his account.

“I have folded the 365th crane while I pray for health and peace for everyone,” he continues, while showing an origami on stamped red paper.

That message marks a cycle for Inagaki, 60, who arrived in the United States in August 2020, when the country was immersed in the health crisis caused by Covid-19 and personal encounters were not advisable.

“I started recording the origami of cranes because of the pandemic. I wanted to use my social networks to send a message to everyone expressing my sympathies, “says Inagaki.

Thus began the practice of recording videos with practically the same frame in which the consul is seen in the foreground speaking. The only changes from one day to the next are their shirts and the number of each crane. Paper cranes are a centuries-old tradition in Japan, where they symbolize longevity.

“It is believed that folding a thousand paper cranes is a prelude to good things,” says Inagaki, but adds that actually, more than a thousand cranes, you have to fold “a lot.”

By eliminating days 193 and 194 when he was unable to upload his videos due to problems on the platform, Inagaki has remained true to his purpose.

However, on day 195 he went slightly off the script by adding an enthusiastic “I’m back!” At the beginning of the video, and then adopting the traditional tone of his pieces.

This Friday, Inagaki also introduced some changes to mark the occasion: He wore a suit and showed the cranes that, together, made up the numbers 365.

“To continue on a daily basis, I thought it best to do something simple,” explains Inagaki.

The simplicity of his content on Instagram turns his ten- or eleven-second pieces into an almost hypnotic experience. By scrolling through the video year quickly, it is possible to see the changes in your hair, almost as if it were an animation.

“I go to the hairdresser every ten weeks,” says the diplomat.

Each crane has its date. Inagaki keeps them in a large box, and plans to donate them to a nursing home or nursing home when he finishes his assignment in Seattle. Until then, he promises to continue his origami, to the delight of his nearly 900 followers on his @hisaoinagaki account.