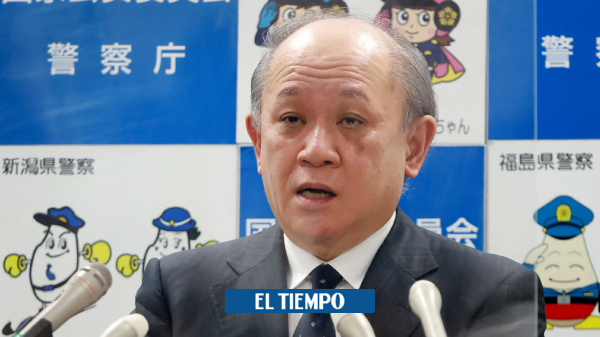 The director of the National Police Agency of Japan presented his resignation on Thursday due to security failures in the assassination of the former Prime Minister Shinzo Abe, for whom the Government prepares a state funeral surrounded by controversy.

Itaru Nakamura He communicated his decision during the press conference in which the report on the police action during the electoral act in which Abe was shot dead in the street was presented.

(Also read: ‘Moon’, the sect linked to the assassination of the former Japanese prime minister)

The security plan had “obvious flaws”, the report indicates, “serious” errors that led to “a fatal result”, said Nakamura, who considers that from now on the authorities must “review the security devices” and “start from zero”.

Abe died on July 8 at the age of 67 after being shot in the back with a homemade firearm while giving a speech outside a train station in the city of Nara.

The report published by the Japanese National Police Agency notes that the number of officers and their location were poor, creating “a gap in the protection of the rear.”

(You can read: Shinzo Abe: suspect in his murder will undergo psychiatric examination)

At the time of Abe’s speech, four police officers, including a member of the special contingent, were guarding the former prime minister while another guarded the rear of the island from which the politician was speaking.

The traffic had not been closed that day and the agent was distracted by a bicycle that passed by behind. Without being seen, the confessed author of the assassination, a 41-year-old ex-military man identified as Tetsuya Yamagami, approached and missed a first shot.

“None of the bodyguards were aware of the approach of the suspect and did not immediately recognize that the sound of the shots was caused by a firearm,” the text says.

After the first detonation “no action was taken to get Abe out of danger, such as lowering him from the lectern or throwing him to the ground”, as witnessed by the images improvised by those attending the speech, and when the bodyguards saw the shooter and tried to block the second shot was too late.

Abe died from blood loss after receiving two bullet wounds, one in the neck and one in the chest.

(Also: Japan: what is the link between a religious sect and the murder of Abe?)

The former president, Japan’s longest-serving prime minister in history to date, was fired in mid-July by his family at a private funeral that brought together thousands of people near the site, Tokyo’s Zojoji Buddhist temple.

The Government is preparing a state funeral scheduled for next September 27 that has generated controversy due to the coverage of expenses with public funds and the polarization caused by the influential politician within the country.

This Thursday, when the funeral rites are 49 days old, an important date in the Buddhist funeral rite, government sources have leaked that the cost of the official funeral will amount to at least 250 million yen (about 1.8 million euros), with the forecast that some 6,400 attendees will attend.

See also  Díaz, the Wayú magician who will now play with the English Liverpool
Photo:

The funeral has been criticized by the opposition and public opinion, who argue that it should not be financed with public money and that the cost is much higher than other funerals of former presidents that have not been paid for by the public treasury.

(In other news: Shinzo Abe, the assassinated leader who set the course for Japan)

According to various polls published since the announcement by local media, about half of Japanese people oppose the act.

Abe’s will be the second funeral of its kind in post-war Japan since the one dedicated in 1967 to Shigeru Yoshida, who ruled in a first term of one year (1946-1947) and later in a relatively stable period of more than 6 years. (1948-1954) in a country characterized by frequent changes of government.

Japan: the strict control on the carrying of weapons in that country

Shinzo Abe: video of distressing moments of the attack on former prime minister

Shinzo Abe: this was his funeral in Japan after the assassination

Filed the case against the 'Tarragona gunman', who received euthanasia