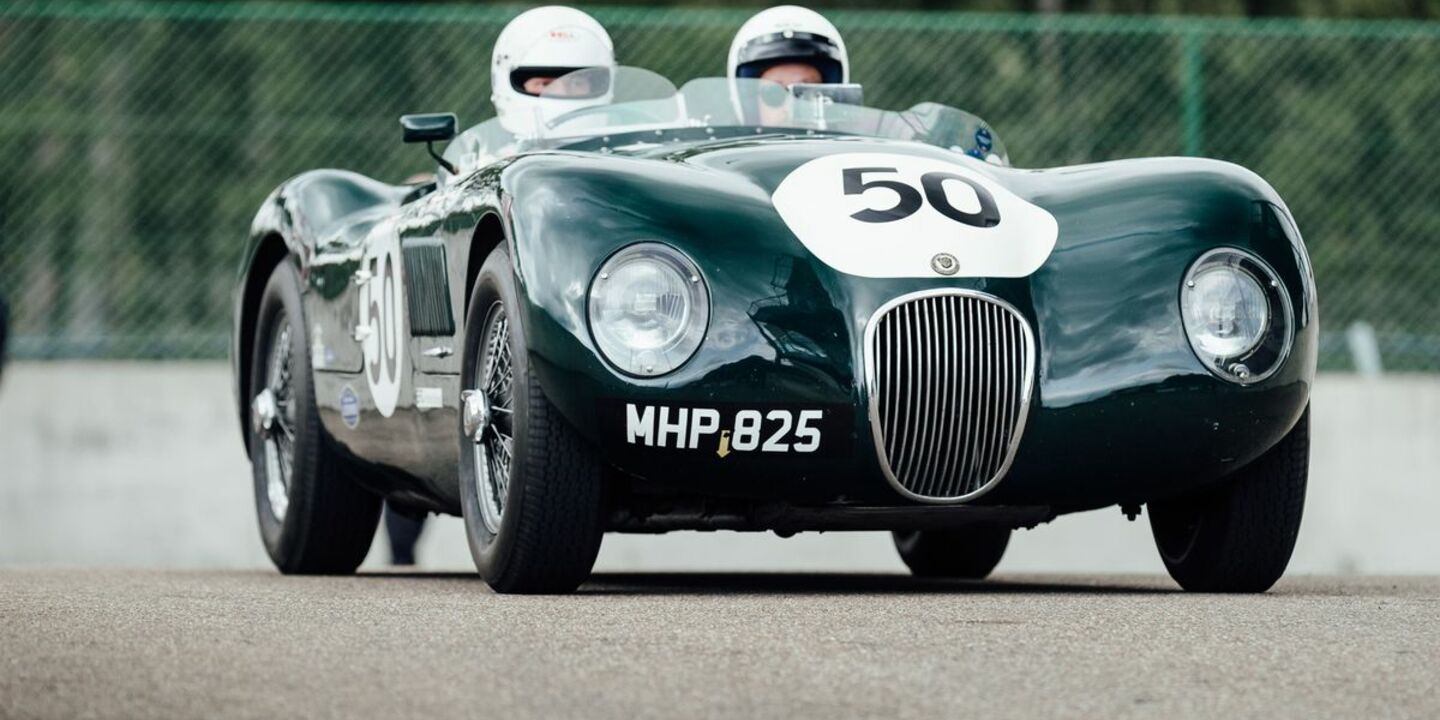 During this soaking wet summer of 2021, we can already be happy that it only rained a little on this Friday. Fortunately, we have appointments with some Jaguar connoisseurs to meet the jewels of the brand from the 50s and 60s.

Including the E-Type, the lady of honor of this Historic Grand Prix, on the occasion of the 60th anniversary. And just like at that world premiere on March 15, 1961 in Geneva, the lines of this legend remain astonishingly beautiful.

At the edge of the Limburg piste we sample a few copies, but also an XK and even C-Types, the ancestor of the E-Type. Not to mention the XJS, the successor from 1975, and a little further on the only one sold in Belgium F-Type Heritage 60 Edition.

However, we are not here to look, but to drive. Together with the owners of these valuable Jaguars, who have been pampered for more than 30 years.

We start slowly, with an XK 120. A 1952 example that has just been fully restored. Bought in California from its first owner. We accompany the new owner for his first rounds.

It is a beautiful piece, with shiny wood and leather that has not yet become dull. The 6-cylinder runs like a metronome, although it does spread a certain petrol fume after a circuit round. The braking, with drums, requires anticipation to avoid destroying all that renovation work in a few seconds.

This XK 120 is the slowest of the day, we never exceed 66 mph (106 kph). However, in 1953 in Jabbeke it was also an XK 120, although modified and equipped with aerodynamic accessories, that broke the speed record of that time: 173 km/h. Today none of that.

The E-Type’s long hood is ubiquitous when you take a seat in this first-generation example. The mechanics may have been overhauled, but the dashboard of this British roadster never had to be refreshed. There are signs of use, but everything works perfectly. He is ‘dance sun jus’, as they say. It’s a level of finish that we lack in modern cars.

Our driver today controls his machine perfectly, completely relaxed over the kerbstones and full on the throttle when accelerating out. The braking is more emphatic than in the XK 120, and so is the rhythm. But you should also not brake too late, with the risk of overheating the discs.

The song of the 3.8 liter 6-in-line is heavy and swollen and reverberates throughout our body, with its intense vibrations. A wonderful open air spectacle.

In its beautiful burgundy shade, this E-Type of the last generation, in this case from 1971, does not have a 6-cylinder, but a V12. And that is immediately a different experience. Noisier, but at the same time with a softer character, and with more pulling power, linked to an automatic transmission. The evolution is clear, with comfortable seats that are more than just floor-mounted seats. And with seat belts!

Moreover, this is a 2+2 coupe, which of course protects you better against the wind. The board shelf reminds you that the early 1970s was dominated by the moon landing. A beautiful whole, with large knobs and many hands and counters.

The chassis and suspension give this E-Type a high dose of comfort, especially compared to its contemporaries. This 50-year-old is undoubtedly more comfortable on motorways and Alpine routes than on the Zolder circuit. Although you wouldn’t tell that from the way he shoots his slippers.

Speaking of speed, here’s the champion of the day, a true C-Type, the racing version of the XK120. The model that Jaguar won the Le Mans 24 Hours in 1951 and 1953. This example took part in several historic car races.

Under the hood is a 6-in-line that produces a little more than 200 hp. And how. As soon as we leave the pits, this Englishman pushes us into the back, in intense heat, even though there is no roof. A brutal experience.

But despite the large steering wheel, it can be controlled well, occasionally sliding slightly. On the straight, the feeling of speed is enormous. A bit intimidating even, given that there is nothing foreseen in terms of active safety. Hats off – or rather: helmet – to our driver, who drives this 7-figure car confidently and at a brisk pace around Zolder. A beautiful moment.

There were others in the paddock, such as the XJS and the XK 140 and 150, as well as an E-Type Lightweight. But our time on the track was too short to get to know them more closely.