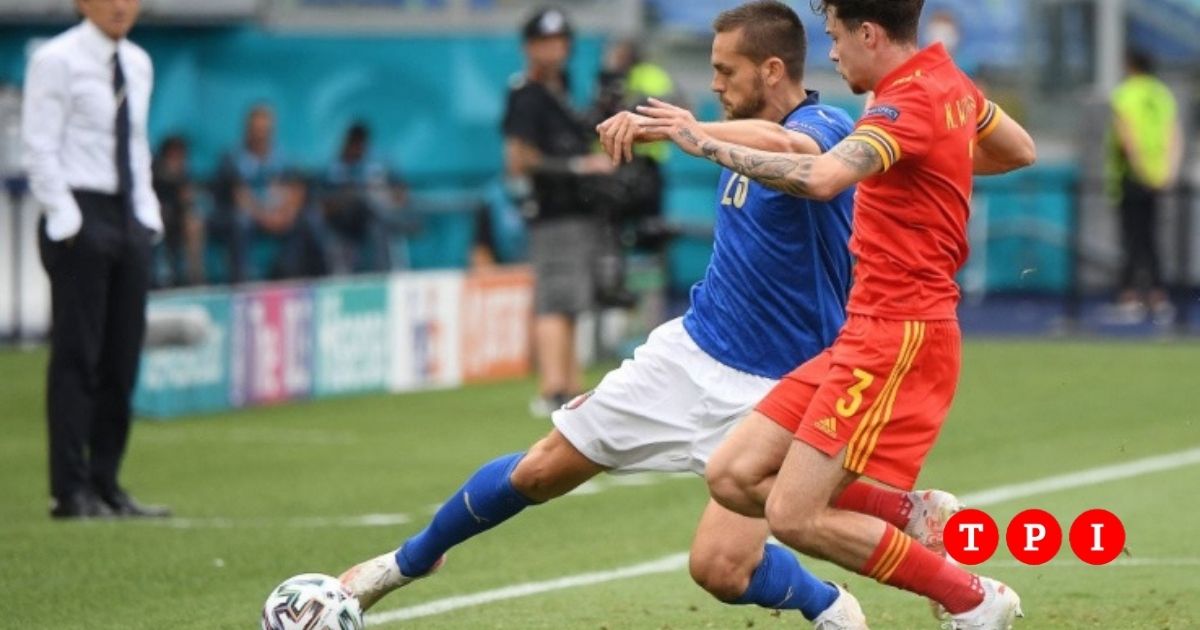 Already qualified for the round of 16, Italy and Wales are competing for 1st place in group A. Even a draw would be good for the Azzurri to hit the target. For the occasion Mancini makes turnover by restoring, in addition to Chiellini, not at best, Di Lorenzo, Acerbi, Spinazzola, Barella, Locatelli, Berardi, Immobile and Insigne. In their place play Toloi, Bastoni, Emerson, Pessina, Verratti, after returning from injury, Chiesa, Belotti and Bernardeschi. On the opposite front, however, Page launches the defense at 3 and changes three men in the team that beat Turkey, or the three warned, inserting Gunter and Ampadu in defense, in place of Mepham. On the left, N. Williams plays instead of Davies while Moore comes out in front. Ramsey should fill the role of fake center forward. In Rome the afternoon is hazy and there are 29 °, the ground is in good condition. 16,000 spectators were present.

91 ′ – Italy opportunity! Cristante tries his right from outside: diagonal low shot rejected by Ward!
90 ‘- We will play for another 3’
90 ′ – Sirigu is called to defend the inviolability of the blue door which has now risen to 1055 ′
89 ‘- Change in Italy: Donnarumma comes out and Sirigu enters
89 ‘- Belotti collects a short rejected to the limit and tries the right in turn: Ward is careful and blocks in two times
88 ′ – Wales defends in the last few minutes, on the other hand also the defeat guarantees him the 2nd place

87 ‘- Change in Italy: Pessina leaves, much applauded, and Castrovilli enters
86 ‘- Triple change in Wales: Bale, N. Williams and Allen leave and Brooks, Davies and Levitt enter
84 ‘- On the developments of the new corner, Verratti tries to put in the middle from the left on the far post for Acerbi, anticipated by Rodon
84 ‘- On the developments of the corner from the right, the ball reaches the edge of Chiesa who enters the area and tries the left: ball still put in a corner by Roberts
83 ‘- Launch into the area on the right for Chiesa whose cross is put in a corner by Williams
82 ‘- The Azzurri fans celebrate in the stands singing the Mameli anthem
80 ‘- Gunter warned for a foul in midfield against Belotti
79 ‘- Pessina warned for a foul in midfield against Wilson
78 ‘- Cross from the right of Toloi which ends directly over the crossbar
77 ‘- Launch on the right for Moore, anticipated by Emerson
76 ‘- Wales opportunity! On a free kick from the trocar, Rodon acts as a tower in the middle for Bale who, all alone, kicks with his left in the half-grate and sends 2 meters high!
75 ‘- Double change in Italy: Jorginho and Bernardeschi leave and Cristante and Raspadori enter
74 ‘- Change in Wales: James exits and Wilson enters
73 ‘- On the corner from the left of Veratti, Toloi extends his head in the middle where, however, there are no companions: Wales is saved
72 ‘- Launch on the left for Emerson, closed in a corner by Rodon
71 ‘- Good closing of Verratti and Bernardeschi on Roberts launched on the right
70 ‘- Bernardeschi tries to go away on the right but the ball gets too long and ends directly on the bottom
69 ′ – Switzerland scores 3-1 to Turkey: goal difference now of 2 goals with Wales (+1 against -1)
68 ′ – On the corner Ward comes out but does not block the ball, luckily for him he arrives from the parts of Ramsey who removes the danger
68 ‘- Jorginho enters the area on the right and hits for Emerson whose left turn is raised in a corner by Ramsey
67 ‘- Bernardeschi focuses from the right and tries the left from the outside: svirgolata ball, headed away from Rodon
66 ‘- On the corner from the right test the header diving in advance Toloi: ball that ends 4-5 meters on the side to the left of Ward
65 ‘- Italy opportunity! Launch into the area on the right for Chiesa who from the back puts in the middle for Belotti who kicks right on the near post: Ward deflects for a corner with his body!
64 ′ – Good news arrives for Wales in 2nd place: Turkey has shortened the distance with Switzerland (2-1) and now the goal difference with Switzerland is 3 goals (+1 against -2)
63 ‘- On a low cross from the right of Chiesa, Gunter anticipates Belotti and clears the area
62 ‘- James kicks in the middle: Pessina anticipates everyone and heads away
61 ‘- Punishment for Wales from the right, near the edge of the area
61 ‘- Page fielded a real striker, pulling Bale back
60 ‘- Change in Wales: Morrell exits and Moore enters
59 ‘- Launch into the area on the left for Belotti, caught offside
58 ‘- Chiesa returns from the right, enters the area and tries the left: weak and central conclusion that does not create problems for Ward
58 ‘- Wales forcibly changes form and goes to 4-4-1
57 ‘- Ampadu intervened with his leg stretched on Bernardeschi’s left ankle. The Var confirmed the decision made by the referee
56 ‘- Ampadu expelled for a hard foul in midfield against Bernardeschi
55 ‘- Launch into the area on the right for Belotti who tries the right-footed counterbalance in the turn: ball to the stars
54 ‘- Launch into the area on the right for Ramsey who presents himself in front of Donnarumma but misses the assist in the middle and allows Jorginho to remedy
53 ‘- Italy pole !! Bernardeschi kick around: ball hitting the outside wood to Ward’s right!
52 ‘- Punishment for Italy from 30 meters, central location
51 ‘- Allen warned for a push against Belotti launched on the counterattack
50 ‘- Wales tries to raise the center of gravity in this start of recovery
48 ‘- The referee grace Bastoni who risked being yellow for an intervention from behind in midfield against Bale
The recovery begins – Captain in Italy becomes Verratti
Change in Italy: Bonucci exits and Acerbi enters

45 ‘- End of the first half – We go to rest on 1-0 without recovery
43 ‘- On the corner from the right there is a double rebound that favors Ward’s high exit
42 ‘- Italy opportunity! Cross from the left vertex of the Verratti area for the rushing Pessina that touches with the tip with the right in a split: ball that, also deflected by Ampadu, ends 2 meters to the side to the left of Ward!
41 ‘- Cross from the right of Chiesa on the far post for Emerson who puts the fly back in the middle: Rodon is careful and wards off the danger
40 – The goal – Verratti kicks the free kick in the middle at half height on the near post for Pessina who anticipates everyone and with a masterful flying right touch he bags the ball in the corner to the right of Ward
39 ‘- GOAL OF ITALY: PESSINA. 1-0
38 ‘- Punishment for Italy near the right corner of the area
37 ‘- Bernardeschi tries the left from outside: ball returned by Rodon
36 ‘- Launch into the area for Belotti who does not arrive in a split on the ball which ends its run directly in Ward’s arms
34 ‘- On a free kick from Bale’s right trocar, Rodon stands higher than everyone else and puts the ball back in the middle: ball directly into Donnarumma’s arms
33 ‘- Chiesa tries to go away on the right to Williams but he stretches the ball too much, dragging it to the bottom
32 ‘- Meanwhile Turkey is one step away from elimination: Switzerland ahead 2-0 and ever closer to the second round
31 ′ – Emerson goes away on the left to Roberts, enters the area but loses the pace and stumbles: a tempting opportunity for the Azzurri fades. 30 ′ – From the corner there are no dangers for the Welsh goal
29 ‘- Italy opportunity! On Emerson’s cross from the left, Chiesa controls and kicks from a tight angle: Ampadu deflects on the line with his body in a corner!
28 ‘- Italy opportunity! Verratti frees himself to the limit and tries his right turn: ball that ends 3 meters beyond the intersection to Ward’s left!
27 ‘- Wales opportunity! On the corner from the left stands Gunter in advance: header that ends by a breath beyond the intersection to the right of Donnarumma!
26 ‘- Ramsey launches into the area, anticipated for a corner by Bonucci
24 ‘- Bernardeschi throws Belotti into the area on the right who makes a cross-shot in the middle on which Chiesa arrives late in the split: ball on the bottom on the opposite side
24 ‘- Good closing of Jorginho in retreat on Allen launched on the left
23 ‘- Launch into the area on the left for Allen who turns in the middle for Ramsey, anticipated by Bonucci
22 ‘- It is played at low rhythms, on the other hand it is very hot at the Olimpico
19 ‘- Wales defending itself with great attention for now: he risked very little
16 ‘- On short rejected by Williams, try the right fly from outside Toloi: ball hit badly that slams into Belotti and squirts centrally into Ward’s arms
15 ‘- Emerson tries the left from 28 meters: central conclusion, blocked on the ground by Ward
15 ‘- Mancini has reversed the position of the two external attackers: Chiesa now acts on the right, Bernardeschi on the left
14 ‘- Launch into the area on the right for Chiesa, anticipated in extremis with the tip of his foot by Williams
13 ‘- Chiesa goes off on the right to Gunter and centers for Bernardeschi, anticipated with a header by Rodon
11 ′ – On a cross from the left trocar of Bastoni tries the right to the fly in half-turn Belotti who only touches the ball but the Toro striker was still offside
10 ‘- Launch on the left for Emerson: ball too long that passes on the bottom
9 ‘- Wales would currently be 2nd even in the event of a defeat, for the best goal difference
7 ‘- Meanwhile, Switzerland ahead against Turkey, at this moment the 3rd place would be guaranteed
6 ‘- Launch into the area for Belotti: ball too long, Ward comes out and blocks
5 ‘- Italy tries to press high to put the opponents in difficulty
4 ‘- On a free kick from the right trocar, Bale fishes the rushing Williams in the area on the left who crosses directly into Donnarumma’s arms
2 ‘- Wales is lined up with an unprecedented 5-2-3
1 ‘- Launch on the right for Bernardeschi, caught offside
The match begins – Italy kick-off attacking from left to right

ALL THE NATIONALS CALLED UP