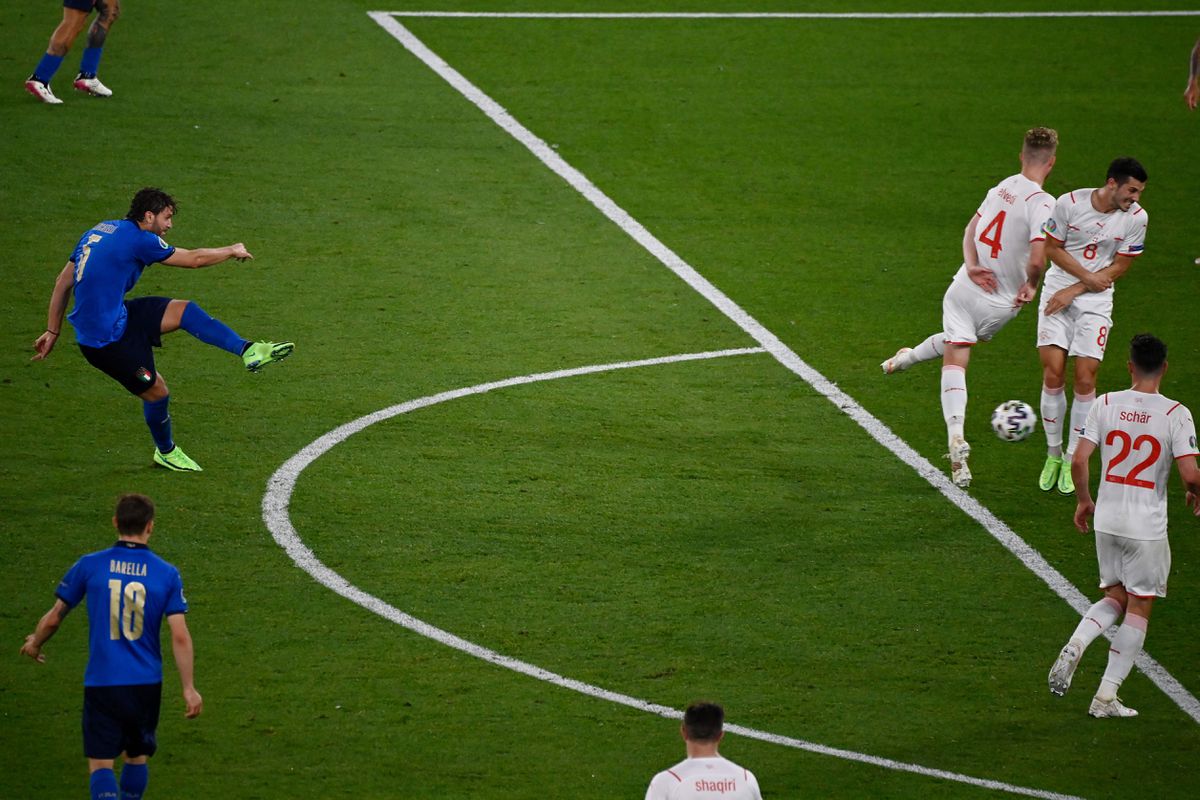 The appointment with Switzerland at the Olympic in Rome had that enigmatic air of a confirmation rite. Media Italia needed to know if the collective happiness of last Friday had been just a mirage. The fantastic victory against Turkey (0-3) triggered a strange optimism at this stage of the championship. But Switzerland, Roberto Mancini, the Italian coach, had warned, was going to demand much more from his uncomplexed team. Some 4,000 fans dressed in red – much less than the Turks last Friday – populated the stands of the Olympic. But the rest of the stadium, just tifosi azzurri, It did not take long to discover that he would attend another magical night in which an exuberant Nazionale would prevail with a double from Locatelli, extraordinary Sassuolo midfielder for whom Europe is asking, and a result traced to that of five days before. Italy rides three at a time in this European Championship and sealed their pass to the second round.

The legendary sentence of Orson Wells in The third man would serve to explain Wednesday’s game at the Olympic in Rome. “In Italy, in 30 years of domination by the Borgia there was nothing but terror, wars and massacres, but Michelangelo, Leonardo da Vinci and the Renaissance emerged. In Switzerland, by contrast, they had 500 years of love, democracy and peace. And what was the result? The cuckoo clock ”. The Swiss team on Wednesday was something similar to that cartoon, an orderly formation from which an innocent little bird emerged from time to time and which put its precise watchmaker’s start at the service of a naive approach in attack. The team led by the Bosnian Petkovic did not shoot between the three sticks that Donnarumma defended until the 63rd minute. And Italy, capable of sowing terror with a great team game, no longer forgives anyone.

The maximum Gatopardiana, that everything must change so that everything remains the same, does not work at the Nazionale. The team had already 28 games undefeated and nine victories in a row, all of them without conceding a goal. So the coach only replaced the full back Florenzi, with discomfort, by Di Lorenzo. The engine room, in the absence of the injured Verratti, continued to be guarded by Jorginho escorted by Barella, whom the Italian-Brazilian compares to the powerful Kanté, his teammate at Chelsea. The Inter midfielder is fireproof, young and of overflowing quality. He was the only one who did not receive a single indication from Mancini because he did everything right. And yesterday he lived with the same indifference the timid attacks of the rival as his coach, the approach of his opponents. This Italy only has the opposite area in its sights.

Switzerland tried again and again vertically, unable to temper the game. A closed defense. Also several cons launched with more pain than glory by the small Shaqiri, a substitute for Liverpool and a star of his national team, and Xhaka, a midfielder sought by Mourinho for his new Rome. Swiss ambition did not last. Italy gave early warning and in the 10th minute Immobile had it with a great cross from Leonardo Spinazzola, a full back for Roma, driving the ball with a leg changed from the left. It was his gang, the one defended by Mbabu, for which Italy at first broke the Swiss order.

The first goal, however, came down the other lane. The VAR had just annulled a goal to Chiellini by hands before leaving injured in the 25th minute. And only 60 seconds later, a play by Berardi left Locatelli alone after a great play on the band that ended with a cross pass without options for the goalkeeper. An almost automatic combination of two of the stars of Sassuolo, one of the teams that has played the best this year and that has contributed the most footballers to the Nazioinale. Italy was already at ease and looked more and more like the machine that swept the Turkish team. So much so that he was able to trace the same result with the third goal, by Immobile from outside the area in the 89th minute.

Italy is once again the country of magical nights, as Gianna Nannini and Edoardo Bennato sang at the 1990 World Cup in An italian summer. That is the soundtrack of a nation united intermittently in summer periods of every four years. And last night he recovered that aroma of screams on the balconies and televisions on the terraces after the abyss of the 2018 World Cup in Russia. It was confirmed by the entire Olympian standing to say goodbye to Locatelli, the hero of today’s match.