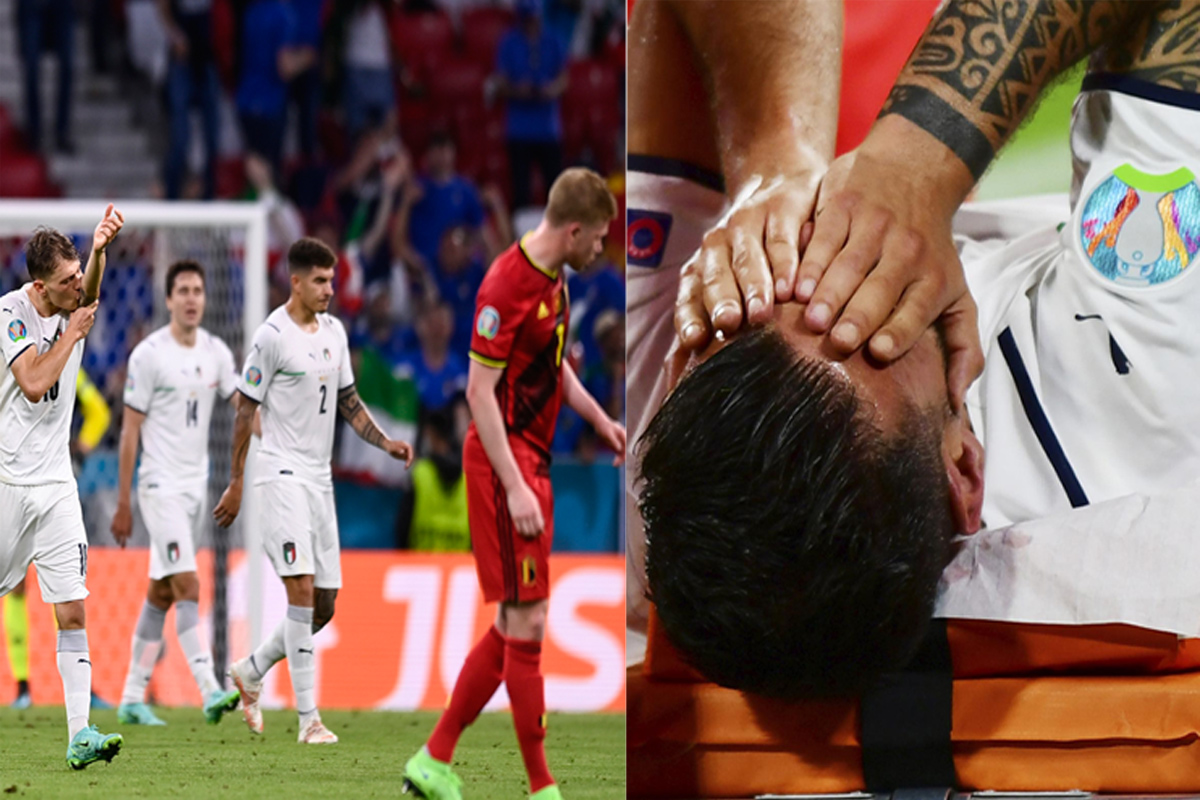 EURO 2020: ITALY BEATS BELGIUM 2-1 AND FLY IN THE SEMIFINAL AGAINST SPAIN

Italy beats Belgium 2-1 and wins the Euro 2020 semifinal against Spain (July 6 at 9pm at Wembley). Mancini’s blues extend 2-0 thanks to two splendid goals from Barella (31 ‘) and Insigne (44’). When the first half seems to be over, however, the Red Devils shorten the distance with the penalty converted by Lukaku (for contact – pupils – by Di Lorenzo on Doku). In the second half, Italy controls the game, suffers on a couple of occasions but wins a well-deserved victory.

Belgium-Italy, Spinazzola injury: he comes out on a stretcher and in tears

Leonardo Spinazzola came out in tears in the 32nd minute of the second half of Italy-Belgium: in his place came Emerson Palmieri. The left-back of the national team and Roma stopped while he was chasing Thorgan Hazard: taken out on a stretcher he was consoled by his clubmate Bryan Cristante. “Let’s hope it’s not serious, but the dynamics of the accident were not great”, said Roberto Mancini at the end of the match. There is talk of a probable rupture of the Achilles tendon.

“We deserved to win. The boys were extraordinary in the game. It is clear that we suffered in the last ten minutes because we were tired. They were good, we could have scored a few more goals.” Thus the Italian coach Roberto MANCINI after the 2-1 victory over Belgium that qualifies Italy to the semifinal of the European Championship. Minimum result achieved? “They didn’t have a minimum result at the beginning -MANCINI continued to Rai Sport microphones-. We set out to try to do the best we could. The road is still long”. Now there is Spain. “Let’s enjoy this victory. Congratulations to the guys who have been very good”, concludes the coach

After the victory in Munich, Roberto Mancini extends his record streak at the helm of Italy: 32nd useful match in a row with the national team, a streak that began on 10 October 2018 with a 1-1 draw against Ukraine. The coach from Jesi had already beaten the previous record that belonged to Vittorio Pozzo, coach of the world champion in 1934 and in 1938, who had stopped at 30 against Austria. The last defeat of the national team of the Mancini era dates back to 10. September 2018, 0-1 against Portugal in Lisbon in the Nations League. The former Lazio, Fiorentina and Inter coach, with experience abroad on the benches of Manchester City, Galatasaray and Zenit St. Petersburg, took office on the Italian bench on 14 May 2018.

EUROPEANS: VERRATTI, ‘DESERVED VICTORY, NOW WE HAVE PARTY THEN WE WILL THINK ABOUT SPAIN’

“We are happy because we work so hard to achieve these goals. Today our goal was to reach the semifinals, they met a great team and we played the game openly. We deserved this victory.” Thus the Italian midfielder Marco VERRATTI after the 2-1 victory over Belgium that qualifies the Azzurri to the European semi-final. What customer was De Bruyne? “Kevin is a fantastic player who is proving to be one of the strongest in his role – the PSG player added to Rai Sport -. We pressed hard and we didn’t let Belgium think and this allowed us to create chances. We are happy. because I think this is the victory of a team. Now let’s celebrate and tomorrow we think about Spain “. Now Spain. “We have always been optimistic. We have this type of game thanks to the coach. The result can change, it is difficult to decide the result before playing a match. We will try to give our best and see where it takes us”, concludes VERRATTI.

BELGIUM 1-2 ITALY: STRETCHER AND INSIGNE LAUNCH THE BLUES IN THE SEMIFINAL OF EURO 2020.

After a few seconds from the start, Belgium immediately becomes dangerous and recovers the ball in the blue trocar and sets Lukaku in motion, Donnarumma’s exit on the ground is good and recovers the ball. After a very first phase in which Italy suffered from the aggression of the ‘red devils’, Mancini’s team tries to maintain dominance of the game within the opponent’s trocar. At 13 ‘the blue scream for Bonucci’s goal chokes in the throat. Cross from the right lane that is extended right on the body of the Viterbo defender who from a few steps overcomes Courtois: the Var cancels for offside. At 21 ‘Donnarumma’s feat that saves his goal on a great shot by De Bruyne. Fast restart of the City midfielder who moves the ball to the left and kicks, the Neapolitan goalkeeper puts a hand in it and deflects for a corner. 5 minutes pass and Lukaku starts in the open field reaches the limit and kicks from the right inside: Donnarumma throws himself to the right and deflects for a corner. The blue replica is ready. On the developments of the corner Spinazzola starts quickly on the counterattack who serves in the area on the left Chiesa who returns to the right and kicks: ball deflected with one foot by Alderweireld in the arms of Courtois. At 31 ‘Barella unlocks the match: the Inter player is served in the penalty area after a doubtful contact on Immobile and in a handkerchief he discards two opponents and crosses with the right an unstoppable shot for Courtois. At 41 ‘Chiesa goes close to doubling with a right-footed shot from the edge that ends out of a whisker. Three minutes pass and Insigne finds a pearl for the 2-0: the Neapolitan striker jumps Tielemans focuses on the right, gains meters and kicks around, Courtois relaxes but does not get there. In full recovery, Belgium shortens the gap thanks to a generous penalty awarded by referee Vincic for a foul by Di Lorenzo on Doku. From 11 meters Lukaku displaces Donnarumma. The first attempt of the recovery is from Italy with Insigne serving the ball to Chiesa who kicks from the edge in a precarious position, ball out.

At 7 ‘another beautiful blue restart with Barella serving Chiesa, immediate cross for Immobile who tries the conclusion on the fly but hits badly and thwarts the opportunity. At 11 very dangerous Doku from the left with a sudden acceleration, the Rennes winger puts a good ball in the middle but Donnarumma saves at the exit. After 5 minutes Martinez’s team almost equal: throw into the area on the left for De Bruyne who hits the middle for Lukaku whose right-footed shot is rejected on the empty net line by Spinazzola. At 20 ‘chance for the Azzurri, Insigne throws Spinazzola into the area who, all alone, kicks with a left-footed rebound of first intention and puts the ball just to the right of Courtois. At 29 ‘the first changes of Mancini with Belotti and Cristante in place of Immobile and Verratti. At 33 ‘bad injury for Spinazzola, who leaves the field on a stretcher, replaced by Emerson Palmieri, Berardi also enters in place of Insigne. At 40 ‘still dangerous Doku: sows all the defense of Italy returns to the right and kicks from the edge, ball just over the crossbar. Italy defends itself with the heart and after seven minutes of injury time can celebrate and think about the semifinal against Spain