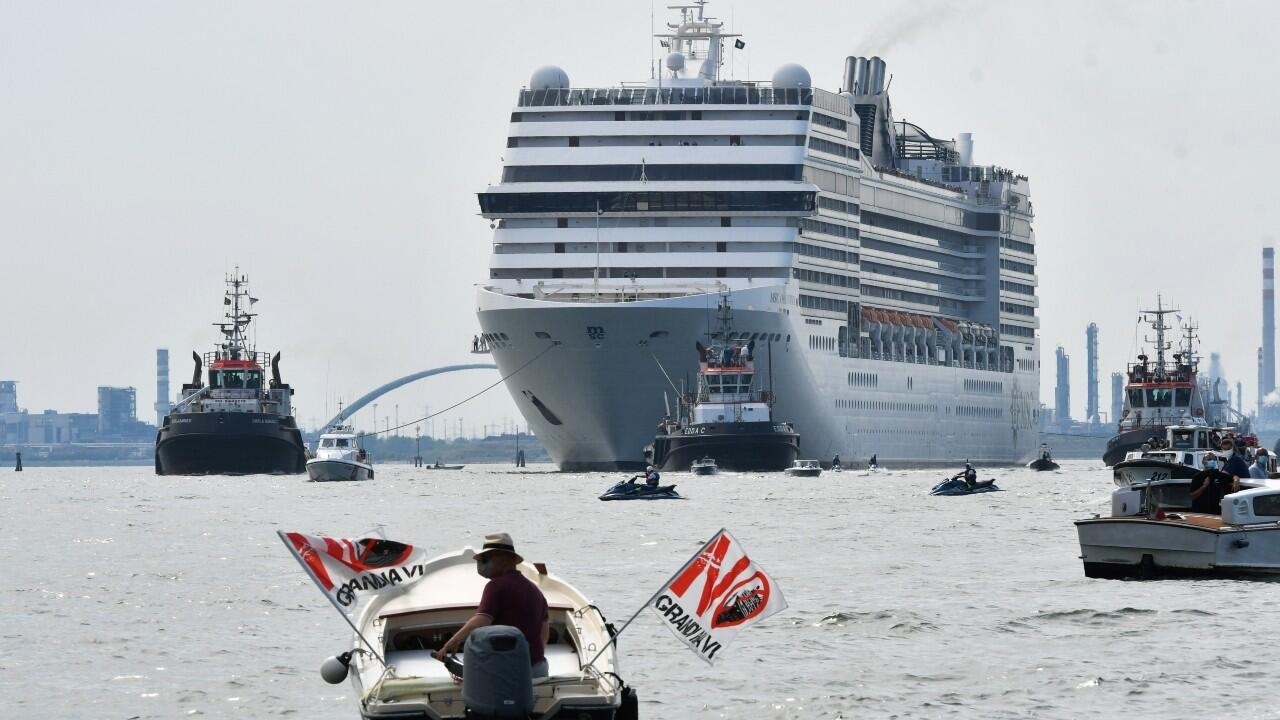 Italian Prime Minister Mario Draghi welcomed the measure that will take effect from August and described it as “an important step for the preservation of the Venetian lagoon.” According to a government statement, small boats, with a capacity of up to 200 passengers, will be able to continue their course to the center through the city’s canals.

Faced with the threat of the United Nations Educational, Scientific and Cultural Organization (UNESCO) to remove Venice from its ‘World Heritage’ list, the Italian Government declared the waterways of Venice a national monument.

With the measure, the nation’s authorities will prohibit from August the passage of large cruises through the Venice lagoon and the canals that pass in front of St. Mark’s Square and the Giudecca island – the disproportionate image of cruise ship and art ended Venetian – to prevent them from being declared a World Heritage Site at risk.

“With this decision, the government acted quickly to avoid the concrete risk that the UN agency for culture (UNESCO) would add Venice to its list of World Heritage in danger during meetings to be held in Beijing, China, this week, “declared Italian Culture Minister Dario Franceschini.

Franceschini reported that the ban will take effect on August 1 and that the measure was considered emergency during a cabinet meeting. This will apply both to the basin of the lagoon, close to St. Mark’s Square, and to the Giudecca canal, an important Venetian marine artery.

“The cabinet decree also establishes an unshakable principle to declare the urban waterways of the San Marcos Basin, the San Marcos Canal and the Giudecca Canal as a national monument,” added the minister.

Italian Prime Minister Mario Draghi celebrated the initiative that he called “an important step in the preservation of the Venetian lagoon”, which for decades has suffered from the onslaught of cruise ships and millions of tourists.

The measure, in particular, prohibits the navigation of ships of more than 25,000 gross tons, that have dimensions greater than 180 meters in length, 35 meters in height and that produce more than 0.1% of sulfur in their emissions.

Culture and the environment with relief from the government’s measure

The Italian Government’s announcement was well received by local activists, who declared themselves against the passage of large cruise ships due to, among other things, the damage they generate to the environment, not counting the damage to property.

Likewise, it is established as an endorsement of the Executive to the Parliament that, in May 2021, approved a law whose objective was to remove the large cruise ships from the Venetian lagoon.

Despite this, in early June, just over a year after the pandemic forced a reduction in international travel, locals were surprised by a cruise ship, the MSC Orchestra, which entered the canal en route to Croatia and Greece. . This rekindled the debate on the passage of ocean liners, after the authorities’ ban.

Before the outbreak, cruise ships unloaded thousands of tourists in Venice, negatively impacting the city and its delicate marine environment. For decades, environmental movements, in conjunction with residents and cultural organizations, have clashed with the cruise industry, a major source of income for the city.

The Executive’s measure, in addition to setting a specific date to prevent the passage of vessels, establishes the requirements to be able to navigate in it and indicates new berthing points.

According to the British media ‘The Guardian’, for the moment the cruise companies will have to eliminate Venice from their itineraries until the industrial port of Marghera, located on the mainland and established by the authorities for the docking of cruise ships, have a space for the disembarkation of passengers.

It is worth remembering that in April 2021 the Prime Minister’s Government approved a decree to build a terminal outside the lagoon, in which to dock passenger ships of more than 40,000 tons and container ships.

Regarding the new measure, a statement from the prime minister’s office indicates that workers and companies affected by the changes will be compensated.

According to the British publication, the ‘Si Grandi Navi’ (‘Yes Big Ships’) movement, which supports thousands of people whose livelihood depends on the cruise industry and who had been out of work since the pandemic broke out in the spring 2020, he carried out a protest action.

Additionally, the Cruise Lines International Association (CLIA) noted that “the cruise industry has supported a new approach for many years, so this is a big step forward. In addition, the Government’s decision to appoint a special commissioner to expedite the process is a welcome development. We now look forward to progress towards providing alternative berthing arrangements in time for the 2022 season. “