Italy assessed the OSCE’s refusal to attend elections in Russia 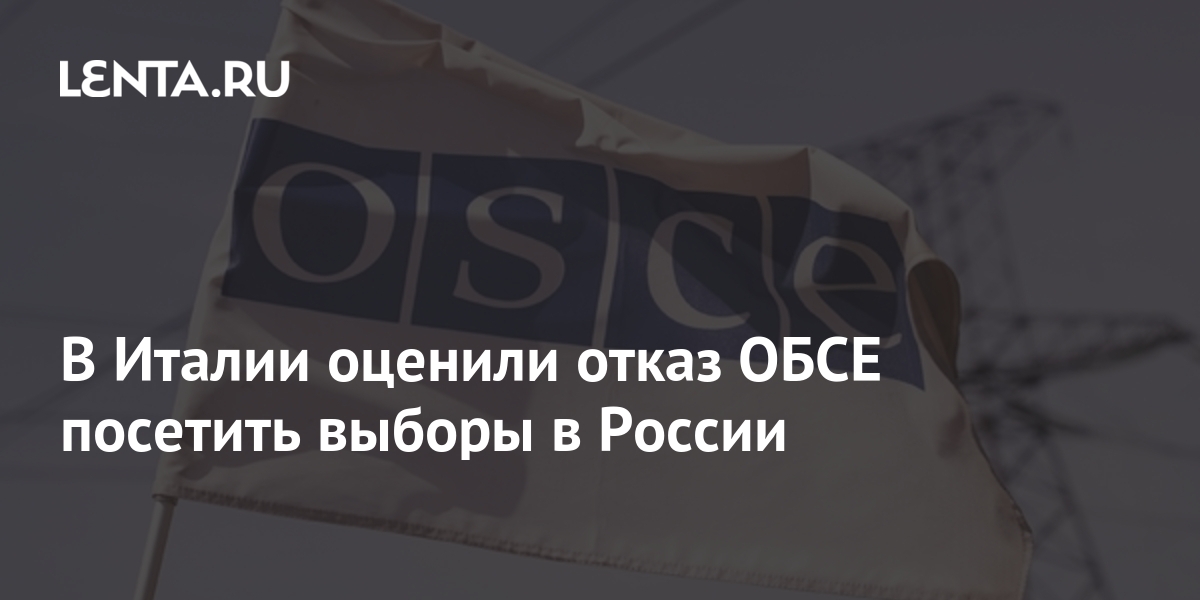 Italy appreciated the refusal of the Organization for Security and Cooperation in Europe (OSCE) to attend the parliamentary elections in Russia. Foreign experts’ opinion leads Notizie Geopolitiche.

Giuliano Bifolchi, political analyst, co-founder and research manager at ASRIE Analytica, noted that this is not the first time that OSCE structures have refused to observe elections in Russia. According to him, the same situation was observed in 2007. However, Bifolki has now said that Russia has demanded a decrease in the number of observers in order to fulfill its obligations to ensure human health in connection with the epidemiological situation.

“Regarding the sanitary situation – the reason why the Russian authorities have demanded a reduction in the number of OSCE monitors – Russia has repeatedly reaffirmed its commitment to ensuring public health, following the restrictive policies already applied in other countries: for example, this summer, several fans were subject to restrictions during the time of the European Football Championship (remember the England – Ukraine match, which took place at the Olympic Stadium in Rome, or the Russia – Denmark match at Parken Stadium), and this also applies to athletes taking part in the Olympic Games in Tokyo these days, despite the fact that more than 80 percent of the guests of the Olympic Village and accredited media representatives were vaccinated, ”the analyst explained.

Italian politician, former MP (1996-2008), expert in the field of international politics Dario Rivolta, in turn, said that the situation is obviously the result of a political choice “not only on the part of the OSCE itself, but also – if not in the first place – from the Russian side ”. According to him, the Kremlin has long made a choice “in favor of refusing to obtain” Western approval “at any cost. Rivolta added that Russia, not without reason, assumes an a priori bias from the West and wants to emphasize its complete independence from those rituals and procedures that it decided to abandon. “In other words, he (the Kremlin) no longer wants to agree to be judged for ‘democracy’ by those who never miss an opportunity to criticize his policies at home and abroad,” the politician said.

On August 3, the OSCE decided not to attend the elections in Russia due to demands to reduce the number of observers: only 50 and 10 people can be admitted from the ODIHR and the PA, respectively. The Russian authorities explained that this decision was taken as an epidemiological measure. Initially, the Bureau applied for 500 observers.

Elections within the framework of a single voting day will be held from 17 to 19 September. Simultaneously with the elections to the State Duma of the VIII convocation, direct elections of the heads of nine constituent entities of Russia and 39 regional parliaments will take place.

The renewal of Ansu Fati, closer

Faith of Danschant: Hereafter, announcement trailer for this Chinese God of War