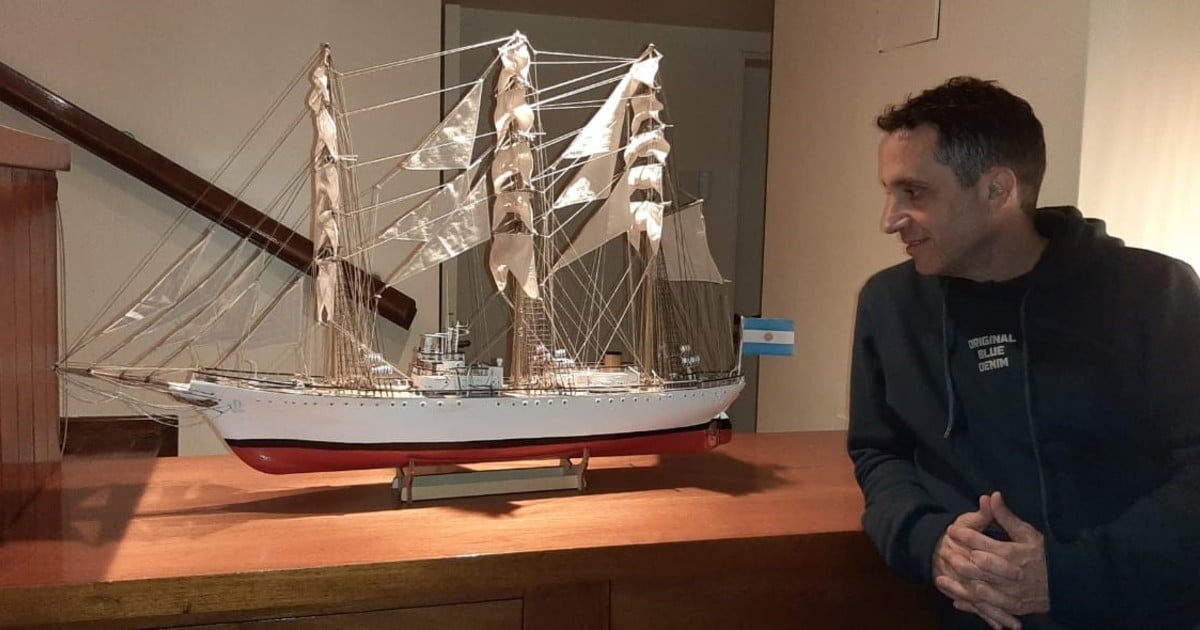 Juan Santiago Sanguinetti (44) is considered one of the Argentines who were able to “take advantage” of the first stage of the quarantine in 2020 to finalize a pending project. It was a dream that began in 2017 and was born in May of this year. Is about the exact replica of the Libertad frigate on a small scale.

With a height of 1.10 meters and the portraits of each corner immaculate of perfection and much detail, Juan shared snapshots of his small great finished work on his social networks. .

The artist lives in Pillar, and he is the grandson of Juan Cirilo Sanguinetti, mayor of the district between 1958 and 1962 and well known in the district. Juan’s grandfather was the one who gave the name to the central hospital of the municipality, built under his management.

Juan Santiago Sanguinetti replicated the frigate Libertad and it took him three years to finish the project, which he finally shared through his social networks.

As a child he dreamed of having before his eyes a ship built by himself. “The grandfather of one of my closest childhood friends was a sailor and he had a huge wooden boat in his house. I said to myself ‘I want to make this boat’. I always dreamed of being able to put them together,” says Juan about his fanaticism .

Their first approaches were making naval modeling or small-scale plastic boats since he had skill with crafts and felt comfortable doing this type of task.

“Luckily I have the ability to work and concentrate on small things. Although I had created plastic boats, I had never experimented with wooden boats like this work that is 100% of that material. I always had the idea that at some point in my life I wanted to make it happen “, confesses.

The replica is 1.10 meters high and is made of 100% wood. In addition, it has threads that allude to the ship’s ropes and typical representations that are part of the Libertad Frigate.

This is how this project little by little began to take shape. In 2017 the idea was no longer represented on a plane with drawings and formulas and became a real stage. “During 2018 and 2019 I did it at a slower pace because I had other work and personal obligations but in 2020 was when I put more effort into it,” he says.

During the first strict quarantine, the ship it was his therapy to disconnect of the daily situation. “It was a way to channel stress and move on after many projects fell apart. It was also a way to focus on more than just the unfortunate reality of the pandemic,” he says.

Juan tells that the family supported him a lot during the long months of work. “For me it’s a hobby. There are things that are transmitted by osmosis, to see the parents, but I cannot force them to do something that they do not enjoy either, “he adds.

During the three years of hard work, Juan points out that at certain times thought about abandoning the project: “I got to leave the reply unfinished. But I realized that the worst mistake is to procrastinate because of fear that it will be difficult, you have to continue and take advantage of the times.”

During the quarantine, Juan found through the project a way to channel stress and keep his head on other occupations. He described it as “his ground wire and an incentive to keep going”

The author of the replica recalls that the most tedious parts of the work were the painting and the threads that represent the ropes of the emblematic Frigate Libertad. “I was very detailed because I was looking for perfection “, points out about the creation process.

Currently Juan has in mind to start another small-scale project that is linked to creating a submarine. “It is another of the great fanaticisms that I have, I am interested in history,” he says, and assures that he does not plan to sell his works. “Never, not crazy. It is a personal satisfaction and has an enormous symbolic value for me”he swears.

Juan has a degree in political science and his routine is also based on raising his children and the new projects he has in mind. He is also completing the helmsman course, another of his big dreams.

“When you are a child, everything seems enormous and unattainable but there comes a moment in life when you begin to remember all your childhood and you realize that there are things that cannot continue to be postponed because the desire and desire are there, intact to be taken advantage of “, closes.