It goes for you grandpa 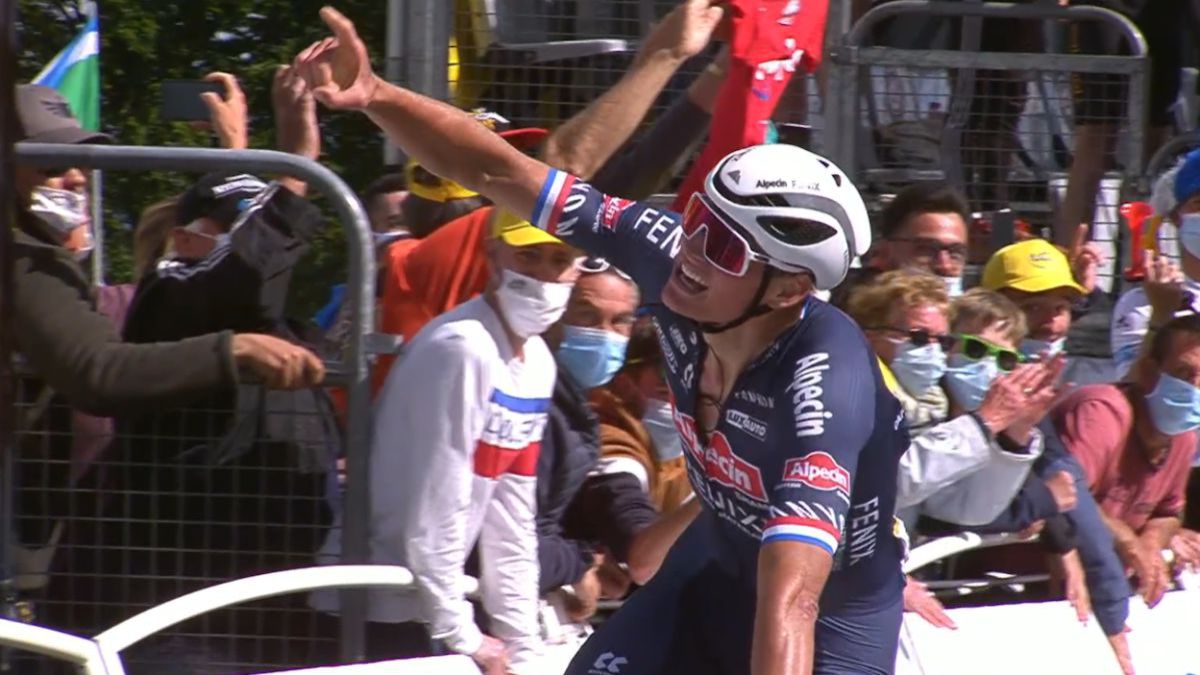 Mathieu van der Poel crossed the finish line with his finger pointing to the sky and then he burst into tears: “It’s going for you, Grandpa!” Raymond Poulidor could never wear the yellow jersey of the Tour. His father, Adrie, did, paradoxically. Poulidor was on the podium eight times, three of them as runner-up, and won seven stages. But he was never a leader. Years later, now retired, the organization walked him around in a yellow polo shirt as an ambassador for Credit Lyonnais, the lion’s sponsor. Van der Poel wanted to give this memory to the beloved Pou Pou. He already tried the first day, with a retro jersey in tribute to his grandfather, who died in November 2019, but he ran into a huge Julian Alaphilippe, perhaps also with the nerves of the debutante. This Sunday there were no longer any hesitations. The brave Alpecin cyclist started less than a kilometer, unstoppable, and conquered the treble at the finish line: stage, leadership and tribute.

Van der Poel had tried his legs on the first of the two climbs to the Brittany Wall, with an attack from below that had no response from the roosters. That step also hid an extra prize for the platoon leaders in the form of bonuses. Mathieu hunted the 8 seconds, who entered their calculations to wear yellow, and anticipated what the end of the stage could be like. Behind came the two Slovenians, always glued together like limpets. Tadej Pogacar, second, scratched 5 ”. Primoz Roglic, third, 2 “. Every pinch can turn to gold. The final classification was to be a carbon copy, a reissue of the previous climb. The first three returned to take the top three positions. There was no one stronger.

The route of this second stage was very similar to that of the first, but the peloton covered it with less risk. I did not want the shocks of the day before. The nursing part had announced less damage than feared at the exit of Perros Guirec. The tremendous battle of the opening day, with two massive heaps, He had left Sütterlin, Lemoine and Konovalovas on the way, who was joined this Sunday by Marc Soler, after finishing the stage, heroic, with both wrists broken. Chris Froome was feared, but he was able to leave, no fractures. “Ready for the second round,” he posted on social media a couple of hours before the peloton began rolling with 180 survivors, with numerous bandages on their bosom. Aftermath of war.

The goal loomed over that Wall of Britain, an ascent of two kilometers at a 6.9% average slope, also known as the Breton Alpe d’Huez, although it is not so bad. The Tour already passed its peak in the distant 1947, as the crossing point of a 139-kilometer time trial, the longest ever. But its modern history began in 2011, with a prophetic victory of Cadel Evans, who was also crowned in Paris. An illustrious precedent.

Until then, the platoon let a getaway of six cyclists, I did not want complications, at least until the final stretch. In the absence of greater emotions, Ide Schelling and Anthony Pérez they fought relentlessly for the Mountain jersey, successfully for the second day in a row for the Dutchman. Then they left Jérémy Cabot and Edward Theuns, who wore a jersey waiting for the group to decide to release the moorings, until that Wall of Brittany where Van der Poel honored the history of the Tour, as his grandfather and father did before. It goes for them.

Check the complete classifications of the second stage of the Tour