Islamophobia in Canada: ran over and killed four members of a family for being Muslims 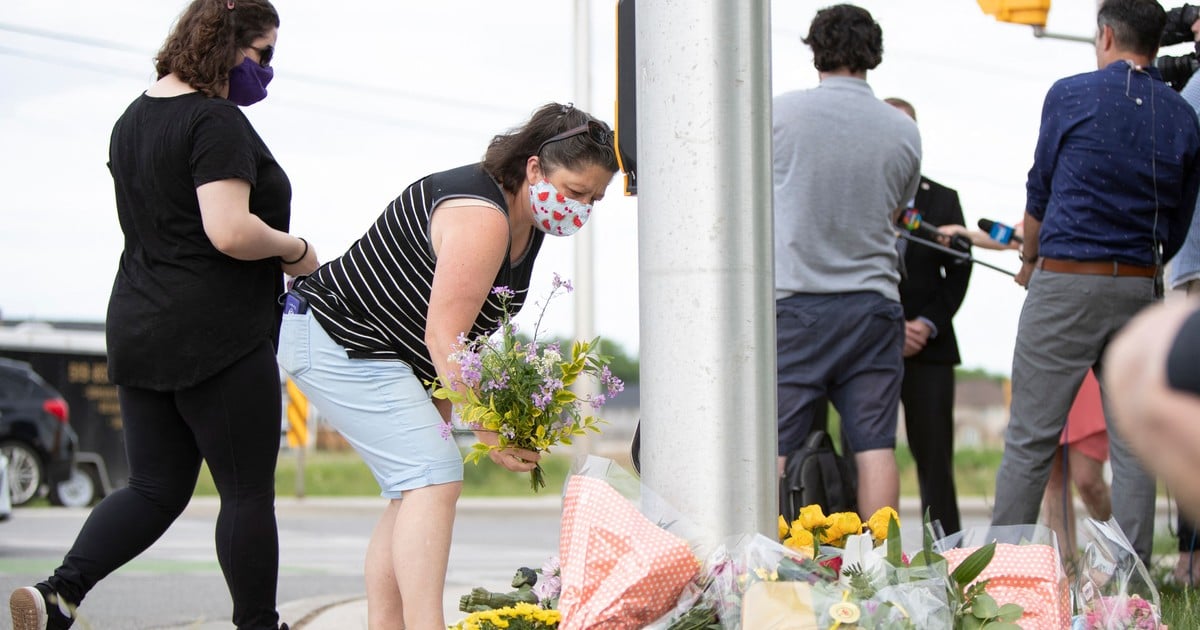 The Canadian Police reported on Monday that a driver ran over and killed deliberately acFour members of a Muslim family in the Canadian city of London, located in the province of Ontario.

At 8:40 p.m. (local time) this Sunday, a vehicle occupied by a 20 year old man He went up to a path where five members of this family were walking and charged them.

The only survivor is a nine-year-old boy, who is in a hospital with serious injuries. The fatal victims are three women, aged 74, 44 and 15, and a man aged 46.

The authorities detailed that the investigators consider “that this event was an intentional act and that the victims were attacked because of their Islamic faith. “

“There is evidence that it was an act planned, premeditated and motivated by hate“, they added.

A group of people mourn the death of four members of an Islamic family that was run over in London, Canada. AFP photo.

They also indicated that the Canadian citizen Nathaniel Veltman, the alleged perpetrator of the events, was charged with four counts of murder in the first degree and one count of attempted murder. This Monday, the defendant appeared in court.

For his part, the Canadian Prime Minister, Justin Trudeau, was “horrified” for the event and expressed his support for those affected by what he defined as “an act of hatred.”

“We are here also for the child who is still in the hospital,” he said through his official Twitter account.

“To the Muslim community of London and the Muslims of the country, know that we are with you. Islamophobia has no place in any of our communities. This hatred is insidious, despicable and must stop“, he stressed.

Additionally, Trudeau confirmed that he spoke to London Mayor Ed Holder about the “hateful and heinous attack”: “I let him know that we will continue to use all the tools we have to combat Islamophobia and that we will be there for those who are in mourning.”

A child leaves flowers at the site where members of an Islamic family were killed in London, Canada. AFP photo.

For his part, Holder published a statement in which he stressed that “London’s hearts are broken.”

“We are in mourning for the family, three generations of which died, “he said, adding that he” prayed “for the recovery of the injured child.

“I ordered the flags in London City Hall to fly at half mast for three days of mourning,” he said, while ensuring a meeting with local Muslim community leaders to convey his “deep sadness”.

“I want each of them to know that ours is a safe community. They should feel safe in London, Ontario. This is their home as much as mine,” said Holder, who spoke of “mass murder against Muslims and citizens of London “

“This unspeakable act of hatred, this act of Islamophobia, must be followed by acts of compassion, acts of kindness, acts of empathy, acts of solidarity, justice and, first of all love“noted the Mayor of London.

In this regard, Munir el Kassem, imam at the Islamic Center of Southwest Ontario, gave statements to the Canadian television station CBC and argued that people should not “be alienated and live in fear.”

“Must face hate on the educational, political and social fronts, “he closed.