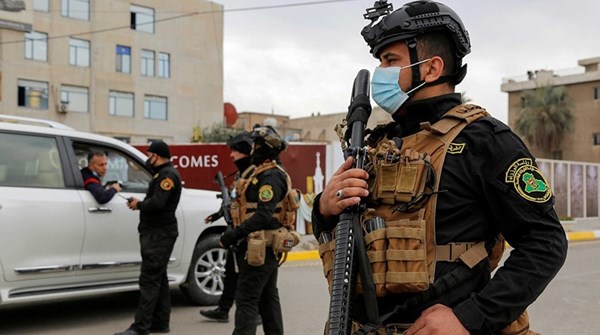 Yesterday, the Security Media Cell of the Iraqi Joint Operations Command announced that Iraqi forces had arrested 7 ISIS members, in two separate operations in Nineveh and Baghdad governorates. A statement by the cell stated that joint forces from the police emergency, the intelligence and counter-terrorism forces in Nineveh, were able to arrest 4 ISIS elements who were working in the Diwan al-Hisbah, soldiers and public camps, during the period of ISIS control over the city of Mosul after 2014. The statement explained that The elements were arrested in the areas and neighborhoods of Al-Zahraa, Al-Arbajiyeh and Tsain, on the left side of Mosul.
On the other hand, the Baghdad Operations Command forces were able to arrest three suspects accused of terrorism, as well as destroying a “house.” In addition, an Iraqi court handed down the death penalty four times by hanging to death against the so-called “Islamic State Sharia judge” in the province. Salah al-Din, north of Baghdad, for various crimes. A statement by the Media Center of the Supreme Judicial Council in Iraq clarified yesterday that “the Salah al-Din Criminal Court considered cases against a terrorist criminal, who worked in the so-called Sharia judge for ISIS terrorist gangs, and issued its death sentences four times by hanging until death against him, and it also issued a fifth sentence against him to life imprisonment in accordance with the Iraqi Terrorism Law.” The statement added: “The terrorist criminal participated in several terrorist operations, including detonating an explosive device on an Iraqi army patrol, which led to the martyrdom of five members, and his participation with other convicts by kidnapping a citizen, as well as participating in the attack on Amerli district with various weapons with members of the ISIS gang. terrorism, as well as other crimes.