Iran | “We can’t expect miracles” – Millions of people vote in Iran today, but locals feel the president has already been elected 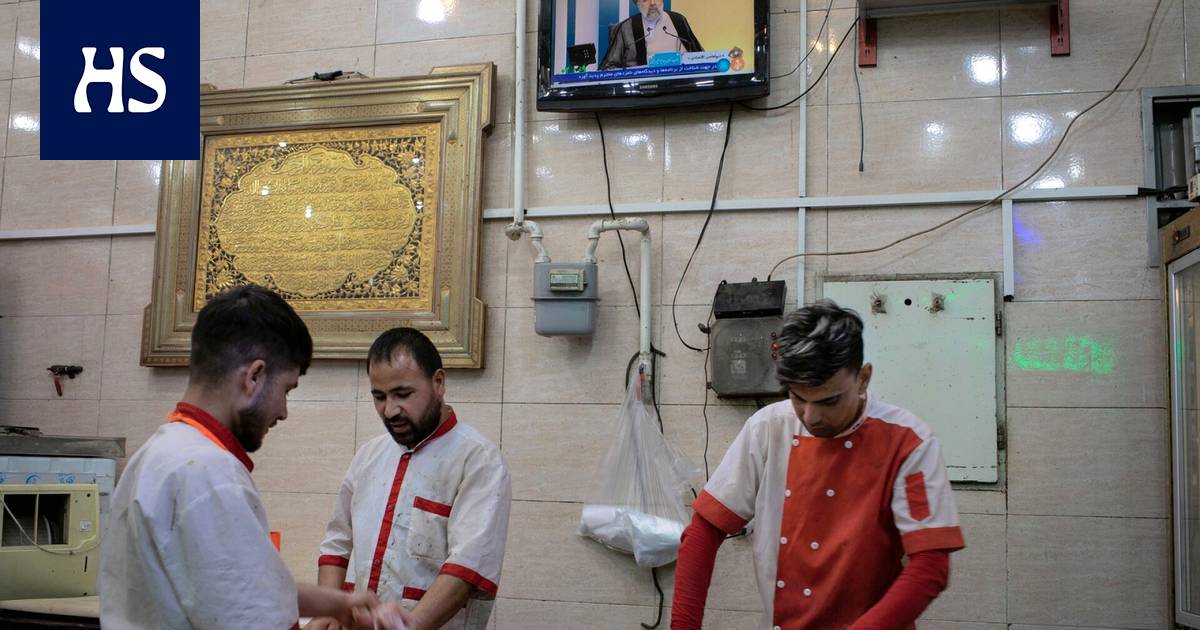 Iran will hold presidential elections on Friday, the winner of which appears to be clear.

Tehran located in the center near Valiasri Square Kheirollah and Ramezan Kavousin A barber shop run by the brothers for four decades. During that time, Iran has had seven presidents and twelve terms.

According to Kavous, the success of barber shops can be inferred from the general economic situation: in good times, people spend more money on their appearance.

Now there are no customers, so the brothers are spending a hot afternoon watching another election exam on TV. The store’s waiting area is adorned with images of Iranian celebrities.

The Kavous brothers at the barber shop are quiet when the moderate candidate Abdolnaser Hemmati speaks on the television election exam. The election exam was followed by about 30 percent of Iranians. Above the TV is a picture of Gholamreza Takht, a well-known wrestler from Iran. Picture: Kaveh Rostamkhani

On Friday Iran is voting for a new president, but many feel that this time the president has been elected first and the election will be held only after that.

Even influential religious leaders have been concerned about the conduct of the election. They fear that turnout will be weak, as the result seems clear in advance.

“I would estimate that between 10 and 15 million people will be voting,” says Barber Kheirollah Kavousi.

The number is roughly in line with estimates from independent polls: between 20 and 26% of the approximately 59 million eligible voters will vote in this election.

“People are pretty emotional and that’s why they could be lured behind Hemmat because all the other candidates oppose him. It could boost turnout, ”Ramezan Kavousi ponders.

The only moderate candidate in the election Abdolnaser Hemmatia is considered an under-respondent. He is a neoliberal economist and former head of the Central Bank of Iran.

In Iran the president is the highest-ranking leader elected. In reality, the top leadership of the country is the spiritual leader, the ayatollah, instead of the president Ali Khamenei.

Although the president elects the president by direct election, the candidates are approved by a board of supervisors whose members are appointed by Khamenei.

552 men and 40 women registered as candidates for the presidential election. Of these, only seven men, just over a percent of applicants, were formally accepted for the nomination.

The small number of successful candidates is nothing new. Instead, the people and politicians were surprised by which seven candidates were accepted.

Among the abandoned are several well-known names, including the former president Mahmoud Ahmadinejad. Moreover, no reformist candidate got through.

Approved candidates are lesser-known or have previously been nominated with poor success.

Underdog Hemmat is considered the only one who could garner a little more support.

A couple of days before the election, three of the seven candidates gave up the race. One of them said he supported Rais’ choice.

The road to the presidency seems to have been cleared.

Ebrahim Raisin however, it is difficult to win the sympathies of the people. In the 1980s, he served as the regime’s “revolutionary prosecutor,” who conducted political trials in the early years of the Islamic Republic.

Raisi was responsible for the execution of thousands of political prisoners without trial.

Raisi also aspired to be president in 2017, when he was elected Hassan Ruhanin main opponent. At the time, the loss came as a result of surprisingly high turnout, which reduced the proportion of conservative voters.

Later, Ayatollah Khamenei appointed Rais as President of the Supreme Court. The appointment emphasized the power of a spiritual leader in the country.

Bridge times the list of candidates is formed in such a way that it is very unlikely that anyone other than Raisi could win.

“I’m not going to vote because I feel like none of the candidates represent me,” he says.

Fatemeh fears that in the hands of the Conservatives, the trinity of power will lose its relevance. Executive, legislative and judicial powers converge. In his opinion, the Rais administration will also restrict the activities of society.

Raisi may seek to make up for its weak popularity and calm the annoyance caused by the restriction of society by promising state financial support to citizens, Fatemeh believes.

However, he also does not support under-defendant Hemmat as “he would only see the financial side in everything”.

“He has never talked about social imbalances. The choice of Hemmat would only mean the continuation of the current situation. As it was with Ruhan. ”

Fresh according to the study, about 25 million Iranians, or nearly one in three residents, live in extreme poverty. They lack food, clean water, housing, basic education and health care.

Due to worrying figures and the big demonstrations of recent years, the socio-economic situation in the country has become an election theme for presidential candidates, which has also been covered in three election exams on the state TV channel.

In election exams the candidates, all men, have vowed to take turns to promote better social policies and support women’s participation. The current president, Ruhan, has been made a scapegoat for most of the country’s problems.

Ruhani grabbed the accusations at the next board meeting and mocked the election exam with a sarcastic tone:

“All of a sudden, women have become good. They began to be respected, and the same happened with different ethnicities and minorities. ”

The streets mainly feature election posters from top candidate Ebrahim Rais. The poster reads: “Our choice for a revolutionary and competent government for building a strong Iran.” Picture: Kaveh Rostamkhani

Elections in the days leading up to the campaign, there is no information on the street scene, unlike in previous presidential elections. Individual posters appear here and there, but the vast majority of them are Ebrahim Raisin.

In 2017, Raisi lost the presidential race, even though he received nearly 16 million votes. This time, everything is ready for him to get a majority of the votes.

Since the election winner is already known, the more essential question is how many will eventually vote. It will determine Raisin’s acceptability as president.

Voting turnout may also be higher than predicted. Iran also holds local elections on Friday, and many want to get their relatives through councils. Since the voting takes place in the same place, many may also vote for the president at the same time.

Tehranian teacher Fatemeh hopes the authorities would make the Conservatives understand the situation in Iran.

“If the Conservatives gain power, they will hopefully realize how structural the country’s problems are and implement reforms based on human rights and democracy.”

“We can’t expect miracles, but they should at least realize they have to take a step in that direction.”

Some of the interviewees appear in the story under their first name for their own safety.