Iran denies responsibility for attack on Rushdie and blames it itself 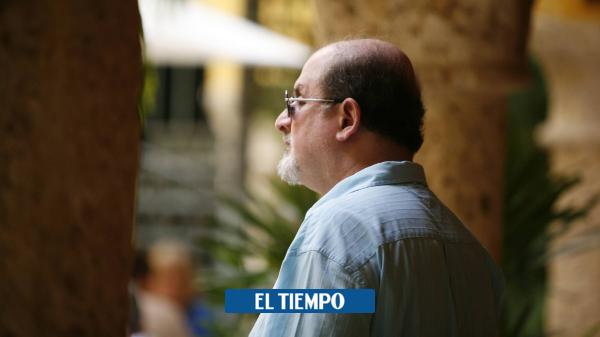 Iran blamed Salman Rushdie on Monday for the attack he suffered last Friday for insulting Muslims and denied any responsibilitydespite the fatwa issued by Ayatollah Ruholá Khomeiní in 1989 against the writer.

In the first official reaction since the stabbing attack in the United States, Iranian authorities denied ties to the attacker or any responsibility for the event, instead singling out the novelist again. “We hold no one but him (Rushdie) and his followers guiltyIranian Foreign Ministry spokesman Nasser Kanani told a news conference.

The 75-year-old British writer of Indian origin was stabbed in a public act in the State of New York by Hadi Matar, whom specialists in Islamic radicalism identify as a sympathizer of Iran and the Islamic Revolutionary Guard, considered the hard wing of the Iranian regime.

Rushdie continues to be hospitalized in a serious condition, with liver, kidney and eye damage, which he could lose, but he is progressing positively and no longer needs assisted breathing.

(Also: Salman Rushdie: what about the man who attacked him in New York?).

the iranian spokesman noted that Rushdie provoked public anger by insulting Islam and Muslims in his book ‘The Satanic Verses’published in 1988.”Salman Rushdie provoked public anger by insulting holy Islam and 1.5 billion MuslimsKanani said. The spokesman made no reference to Khomeini’s fatwa calling for the assassination of Rushdie in 1989 and anyone implicated in the publication of the book, forcing the writer to spend years in hiding.

Instead, Kanani denied ties to the American-born, Lebanese-born Matar and any Iranian responsibility. “We definitively reject any link with the attacker,” said the spokesman, who stated that they only know what has come out in the media. “No one has the right to accuse Iran,” the diplomat added.

Following the attack on Rushdie, the Iranian authorities had so far remained silent and public reactions had not been unanimous.. On the one hand, the conservative media celebrated the event with headlines such as “Divine revenge reaches Salman Rushdie from the ‘Keyhan’ newspaper or ‘The eye of the devil has been blinded’ from the ‘Jaam-e Jam’ newspaper.

At the same time, indifference and silence were the general tone among the citizens, who consider the matter a thing of the past or simply do not know the name of the novelist.

(Also: Salman Rushdie: the reactions after the attack on the writer in New York).

The religious, however, did celebrate the attack. “Imam Khomeini declared him an apostate, and when someone is declared an apostate it is permissible to kill him,” important cleric Jalal Mohebí told Efe yesterday at the Saleh shrine in Tehran.

‘The Satanic Verses’ aroused the ire of Shia Muslims, who considered it an insult to the Koran, Mohammed and the Islamic faith and was banned in India, Pakistan, Egypt, Saudi Arabia and South Africa.

See also  Russian attack Expert from the Swedish National Defense College: Putin's reasons for the attack were insane, and that is bad news for Finland

Within months of its publication, Khomeini issued a fatwa calling for Rushdie’s assassination, forcing the writer to spend years in hiding. Years later, then-moderate Iranian President Mohammad Khatami distanced himself in the late 1990s from the fatwa, saying the government was not seeking Rushdie’s death. However, Iran’s Supreme Leader Ali Khamenei reiterated the fatwa in 2017: “The decree continues as issued by Khomeini.” Two years later, he would again stress that the fatwa “is irrevocable.”

-Salman Rushdie: Who is the author of ‘The Satanic Verses’?

-Iran rejects US revelations about plot to kill Bolton

-Why does Iran execute more women than any other country?