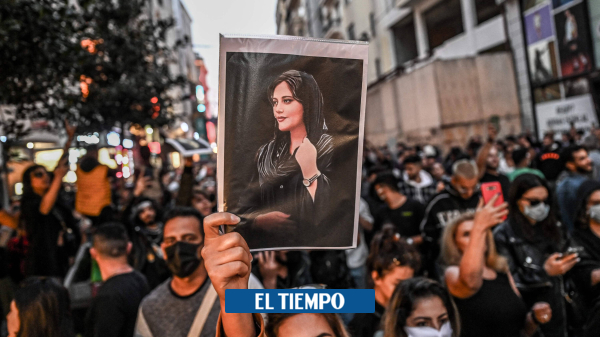 The death toll in the protests that have shaken Iran in recent days over the death of Mahsa Amin has risen to six, Iranian authorities reported on Wednesday.

(We recommend: Europe: this is how the extreme right has managed to gain ground on the continent)

“Unfortunately, two people died in the clashes last night”, said the prosecutor of the province of Kermanshah (northwest), Shahram Karamí, according to the Fars agency, close to the Revolutionary Guard.

The source added that some 25 people were injured in those clashes, including protesters, police officers and bystanders.and accused “counterrevolutionary agents” of the protests in the city of Kermanshah, the provincial capital.

“We are sure that they were counterrevolutionary agents because they were killed with weapons that our security forces do not use,” he said.

(In other news: Hurricane Fiona reaches category 4 and advances strongly towards the north of the Caribbean)

For his part, the governor of the city of Shiraz, Lotfolah Sheibaní, reported that last night “a police assistant” died and four officers were injured in the protests in this southern cityaccording to Fars.

These fatalities join the three deaths confirmed yesterday by the authorities of the Iranian Kurdistan province, where Amini was originally from.

(Keep reading: A 13-year-old girl is accused of stabbing her 5-year-old stepbrother to death)

Amini, 22, died on Friday as a result of the heart attack and coma she suffered on Tuesday of last week at a Tehran police station, where she was detained by the so-called Morale Police for not wearing the veil properly, a mandatory garment in the country.

The authorities have denied ill-treatment against the young woman and have affirmed that she suffered from health problemssomething that the family has denied.

(Also: Minister Reyes confirms meeting between Petro and Maduro on the border)

The protests began on Friday, but have been spreading across the country.

The protests began timidly on Friday after learning of the death of Mahsa Amini after being arrested by the morality police for wearing the veil wrong and have been spreading, increasingly, in more parts of the country and more violent.

Last night there were protests in at least 20 cities, reported the state agency IRNA, in which the scenes of violence by the security forces of days past were repeated.

(Also read: A new life in Canada for dogs rescued from a slaughterhouse in Indonesia)

The government of Iran’s ultra-conservative President Ebrahim Raisí has ​​in recent months increased pressure on women to comply with strict dress rules.

The veil is mandatory since the 1979 revolution led by Ayatollah Ruholá Khomeini, who declared that without him women were “naked”.

– Taupo: alert rises from the volcano that had the largest eruption in history

– What are the cities with the most millionaires on the planet?