Inventing a device to detect diseases from human sweat 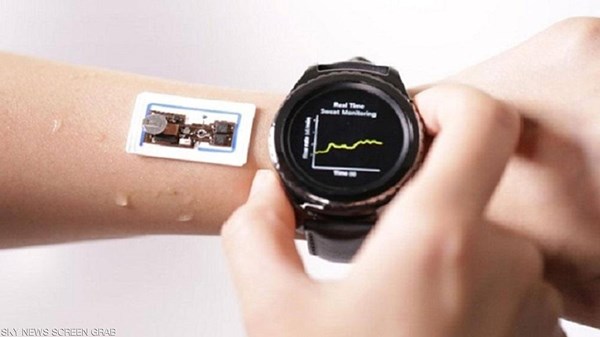 Professor Kyungha Kwon and her collaborators from the Korea Advanced Institute of Science and Technology have created a new wearable device that can analyze human sweat, monitor vital signs, and predict diseases such as diabetes.

To monitor the rate of sweat release, the researchers developed a “heat flow sensor unit”, as they designed an advanced “microfluidic” channel to allow the collected sweat to flow through a narrow passage, while a heat source was placed on the outside of the device, which is a channel to induce heat exchange between sweat. And the hot channel.

As a result, researchers are able to develop a wireless electronic patch that can measure the temperature difference at a specific location on the human body, and convert it into a digital signal to measure the rate of sweat release in real time.

This adhesive patch measures the rate of sweating accurately in the range of 0-5 µL/min, the accuracy of which is physiologically important.

The sensor can directly measure sweat flow, then use the information collected to determine the amount of total sweat loss.

The device features advanced microfluidic systems, along with colorimetric chemical reagents to collect pH measurements, and determine the concentration of chloride, creatinine and glucose in the user’s sweat.

Regarding the importance of the indicators monitored by the device, Kwon says that they can be used in diagnosing various diseases related to sweating, such as cystic fibrosis, diabetes, kidney dysfunction and respiratory alkalosis.

She explained: “Because the sweat flowing in the microfluidic channel is completely separated from the electronic circuit, the new device overcomes the shortcomings of the current available flow rate meters, which were subject to corrosion and aging.”

She added, “The device is characterized by its ease of use, as the patch can be easily attached to the skin, and it contains an additional sensor that detects changes in skin temperature. Using the smartphone application, the user can check the measured data,” according to Sky News Arabia.

“This patch can be widely used for personal hydration strategies, detection of dehydration symptoms, and various health purposes,” Kwon concluded. “It can also be used in a regular drug delivery system, such as measuring blood flow in blood vessels near the surface of the skin, or measuring Real-time drug release rate for accurate dose calculation”.