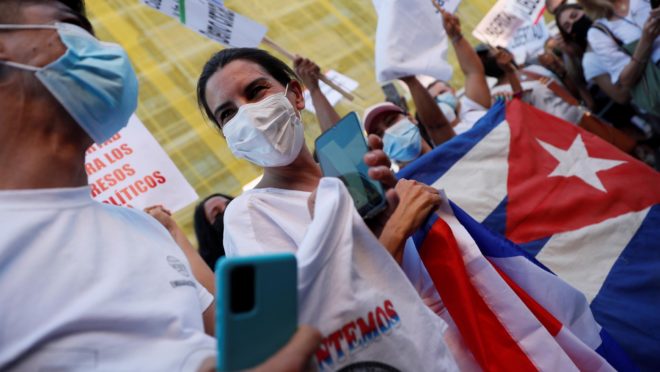 0
SHARES
0
VIEWS
Share on FacebookShare on Twitter
People gather in front of the Cuban embassy in Madrid on Monday to support the demonstrations in Cuba. Illustrative picture.| Photo: Mariscal/Agência EFE/Gazeta do Povo

The streets of Cuba were apparently quiet this Monday morning (12), a day after the massive protests against the Castro dictatorship. However, the internet service remains restricted and, according to information from the independent press, arrests continue to occur in the country. The cell phone internet service has been cut off since yesterday, around noon, which made it difficult to know the real situation in the country, especially in the interior, and about the progress of the demonstrations.

After dozens of arrests this Sunday, activists and opponents denounced on social networks that several people who were arrested remain missing, after having participated in the events, especially in Havana. Among those arrested is Luis Manuel Otero Alcántara, leader of the San Isidro Movement, which brings together independent artists protesting against the Cuban dictatorship.

According to the independent newspaper 14ymedio, people who attended the weekend’s demonstrations were being sought out and detained on Monday by Cuban authorities.