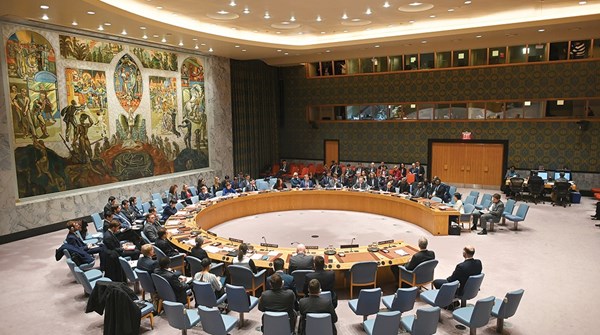 Yesterday, there were welcoming and congratulatory reactions to the election of the UAE as a member of the UN Security Council, amid confirmation that obtaining this membership culminates in a brilliant process of diplomatic and humanitarian work.
The UAE enjoys close relations with the United Nations and its bodies, which began in 1971, passed through many stations, and culminated, yesterday, with a non-permanent seat on the UN Security Council.
On Friday, the United Nations General Assembly elected the UAE as a non-permanent member of the UN Security Council, which culminates in a tireless diplomatic work that took place under the slogan “We are stronger with our union.”
Saudi Arabia, the Sultanate of Oman, Egypt, the United States, Australia, the Netherlands, Ireland, France, Sweden, Kyrgyzstan and Rwanda congratulated the UAE on its election to the UN Council.
The Saudi Foreign Minister, Prince Faisal bin Farhan, congratulated the UAE, tweeting on Twitter: “We congratulate the brotherly UAE leadership and people,” stressing “our full support for the brothers’ efforts to serve just causes in the region and achieve international security and peace.”
The Omani News Agency also quoted the Ministry of Foreign Affairs of the Sultanate of Oman as saying in a statement: “The Sultanate of Oman expresses its support for the UAE in its missions towards issues of international peace and security, and at the same time serves the interests of the Gulf Cooperation Council states, and Arab and Islamic issues.”
The Arab Republic of Egypt expressed its sincere congratulations to the sisterly United Arab Emirates for its election to the Security Council, during the elections that took place in the United Nations General Assembly. Ambassador Ahmed Hafez, the official spokesman for the Egyptian Ministry of Foreign Affairs, expressed his best wishes for continued success and payment to the UAE.
For her part, US State Department spokeswoman Galina Porter stressed in a press briefing her country’s aspiration for a strong and fruitful partnership with the five countries elected to the non-permanent membership of the Security Council, which, along with the UAE, include Albania, Brazil, Gabon and Ghana, expressing her congratulations to the countries The five.
Porter called for cooperation in addressing core issues in order to protect international peace and security.
In statements to their permanent missions to the United Nations, Australia, the Netherlands, Ireland, France, Sweden and Kyrgyzstan expressed their aspiration to cooperate with the UAE and the newly elected members of the Security Council, in order to promote peace and confront global challenges.
For its part, the State of Rwanda affirmed its aspiration to work with the UAE and other countries elected to the Security Council in order to enhance security in Africa and the world.
On December 9, 1971, the UAE joined the United Nations, becoming the 132nd member. Since the UAE joined the United Nations in 1971 to become the 132nd member, the country has signed cooperation agreements with more than 28 United Nations organizations, and hosted regional offices of United Nations organizations. United. Among the most prominent international offices in the UAE are: a coordinating office for the United Nations Women, the United Nations Development Program office, and the Office of the High Commissioner for Refugees. The UAE’s Assistant Minister of Foreign Affairs and International Cooperation for Political Affairs, and the country’s permanent representative to the United Nations, Lana Nusseibeh, stressed that the UAE believes that it has a lot to offer to the Security Council and to “the entire multilateral system.”
The UAE has made many contributions to support various United Nations programs, including $12 million in the budget of the United Nations Women Programme. In 2015, it provided $500,000 to support counter-extremism efforts. In 2016, Emirates Hall was opened in the main building of the United Nations in Geneva.
The year 2018 also witnessed important contributions, as the UAE provided $500 million to support efforts to alleviate the humanitarian situation in Yemen, in addition to $50 million to support the United Nations Relief and Works Agency for Palestine Refugees (UNRWA).