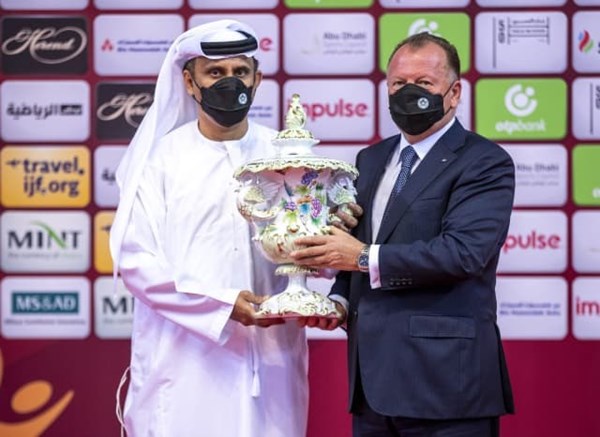 Abu Dhabi (WAM)
Marius Pfizer, President of the International Judo Federation, praised the UAE’s pioneering efforts in leading the global sports scene for recovery, by hosting major international events in various sports, and its superior ability to apply precautionary measures with the utmost precision to all delegations that visit the country and participate in major tournaments that are held on its stadiums and halls.

Pfizer said, during a telephone conversation with Mohammed bin Thaloub Al-Dari, President of the Wrestling and Judo Federation, the International Judo Federation Ambassador for Friendship, Peace and Humanity: “Abu Dhabi excelled in hosting the 50th Abu Dhabi Grand Slam Judo Championship last November, with the participation of more than 40 countries from different continents of the world, It provided an exceptional model in applying all preventive measures to protect players, coaches, administrators, referees and all members of the system.”
For his part, Ibn Thaloub said that Pfizer assured him of the International Judo Federation’s appreciation for the UAE’s great role in hosting Battulga Khaltmi, President of the Mongolian Federation, last November during the activities of the 50th Abu Dhabi Grand Slam, and the consequent return of Mongolia to host one of the four major championships, scheduled Annually for the next four years, starting from June 2022, when the city of Ulan Bator will host one of the elite judo championships in light of the memorandum of understanding signed in Abu Dhabi between the International Judo Federation and the Mongolian Judo Federation.

See also  Crown Prince of Sharjah: Over half a century, Sultan Al Qasimi has provided a unique model in leadership and support for the Union

The cardboard and the impotence of the Stopera

WWE 2K22 trailer: This is the MyGM mode