Interior has detained six jihadist captors in prisons since December 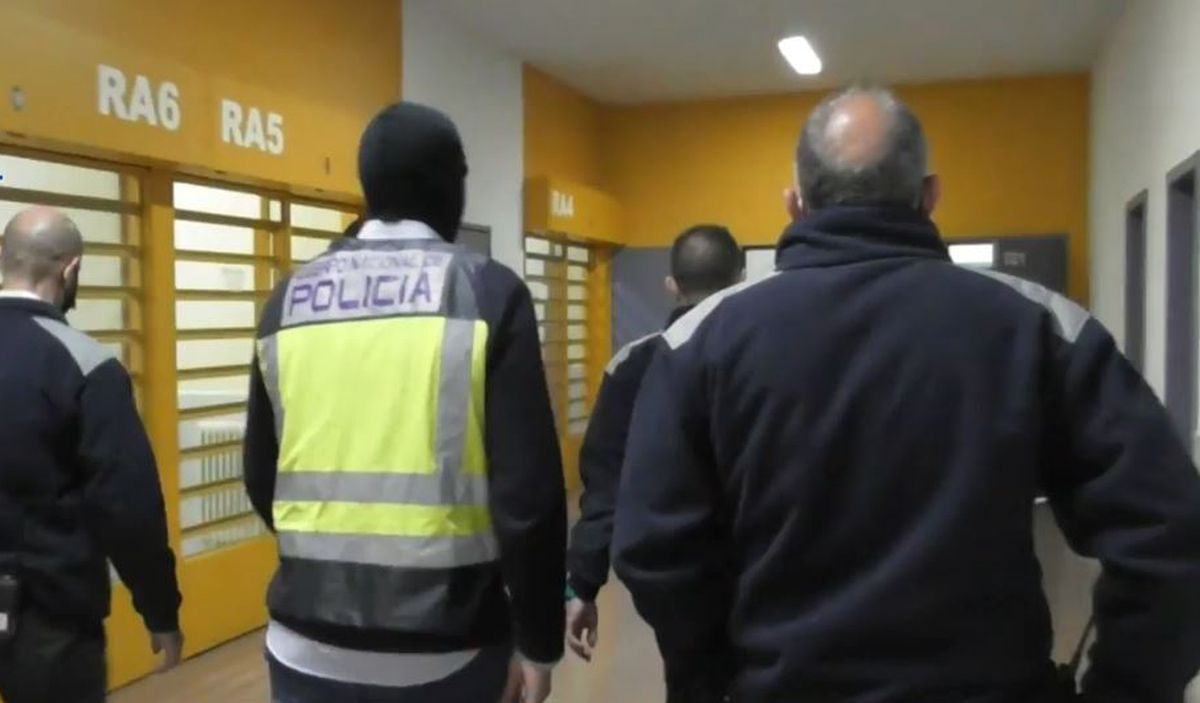 The Interior Ministry has detained, in four anti-jihadist operations carried out in prisons since December, six prisoners who tried to attract other inmates to extremist postulates. The last one, last Thursday, in the Murcia II penitentiary. In this same period, two other alleged Islamists who had just been released have been arrested. Penitentiary Institutions have under control 223 prisoners who either entered prison for jihadism or, after doing so for common crimes, have become radicalized.

At 31 years old, IS was not unknown to the National Police when on Thursday he was arrested in the Murcia II prison, in the town of Campos del Río, accused of indoctrinating other inmates in the ideology of the Islamic State (ISIS, in its acronym in English). In November 2017, he had been arrested, and has since been in prison, accused of being a jihad “reporter”, used to distribute ISIS propaganda in real time through social media and instant messaging applications. Then, with these contents, it captured young people in Ceuta, to whom it provided information to travel to conflict zones. Now, without the information technology available to him when he was released, he used his leadership in prison to lure other inmates to radical Islamism.

With his arrest, there are already four anti-jihadist operations carried out since December in Spanish prisons, with the result of six inmates and one former inmate arrested. In addition, a fifth operation ended with the arrest of a radicalized former inmate in prison who was doing proselytizing work. In December 2020, the Civil Guard detained Yassine K. in Las Palmas II prison, convicted of common crimes and who showed his intention to create a cell to attack when he was released. On March 10, those arrested were Mohamed F., 40, in the Daroca Penitentiary (Zaragoza) and Mohamed A., 43, and Karroubi B., 62, in the Murcia II prison. They were allegedly part of a cell that threatened other Muslim prisoners to follow the principles of ISIS. All three were serving sentences for common crimes.

Only two days later, an ex-inmate fell in Melilla who, during his time in the Morón prison (Seville), had disseminated jihadist material. His activity was discovered after officials detected that a relative was trying to pass him a small computer memory with videos and songs from ISIS during a visit. On March 26, Kamal Mohamed D. was arrested in Córdoba prison, sentenced for jihadism to six years in prison, and a day later the former Mohamed A., who had served a sentence of two years and two months for exalting the terrorism and that, when he was released from prison last year, he could not be expelled to his country of origin, Morocco, due to the pandemic. Both had allegedly maintained their jihadist activity after coinciding, in 2018, in the Botafuegos prison (Algeciras), where several graffiti related to the Islamic State appeared.

“Prisons are a jihadist breeding ground. That is why we continue to watch out for the terrorists who enter prison, to prevent them from continuing their activity there, ”says one of the National Police agents who participated in the latest arrest. The Prosecutor’s Office also points in the same direction. In his last report, he stated that “day by day the investigations of jihadist terrorist organizations or groups proliferate inside prisons, which denotes the difficulty of the reintegration of inmates convicted of said crimes, as well as their danger as indoctrinators” . And he concluded: “Prisons have become one of the main sources of recruitment, radicalization and indoctrination.”

The prosecution gave as an example the arrest, in February 2019, of five prisoners in the Valdemoro prison (Madrid) in Operation Kafig. The leader of the group suggested that prisoners commit attacks when they were released from prison. A year earlier, the Civil Guard had dismantled in Operation Escribano a network present in 17 prisons in which 26 Muslim inmates participated, including two convicted by 11-M.

The professor at the Pablo Olavide University of Seville, Manuel R. Torres, a member of the Group for International Security Studies (GESI), agrees that prisons have been “a hot environment of radicalization for years.” However, Torres makes a positive reading of the recent operations: “They show that there is effective control over what moves inside the prisons. This does not occur, for example, in France, where there is not even a census of radicalized prisoners ”.

In Spain, after the attacks of March 11, 2004, Penitentiary Institutions focused on these prisoners and, years later, began to apply a protocol to detect radicalization. This manual divides jihadist inmates into three groups. The first, currently made up of 108 inmates, is made up of those convicted of terrorism. The second is made up of 41 who entered prison for common crimes, but have been referred to religious postulates in defense of violence. The third includes the so-called “vulnerable prisoners” who, due to their personal situation, run the risk of being captured. Interior includes 74 inmates. “These 223 prisoners have been dispersed through the prisons to prevent them from creating a common front,” details an expert from Penitentiary Institutions in radicalization processes.

Penitentiary Institutions have been fighting, since 2008, jihadism in prisons with Control and Monitoring Groups, made up of officials who collect information on suspected inmates. The latest police operations have started precisely with data obtained by these groups. In addition to dispersing jihadist inmates, as it did with those of ETA, Prisons has offered these inmates, since 2016, to participate in a de-radicalization program. The results have been, so far, very discreet. Of the thirty who sign up a year, the majority drop out. Interior studies reviewing it.

Adriana Cerezo and Cecilia Castro, to the Taekwondo Pre-Olympic