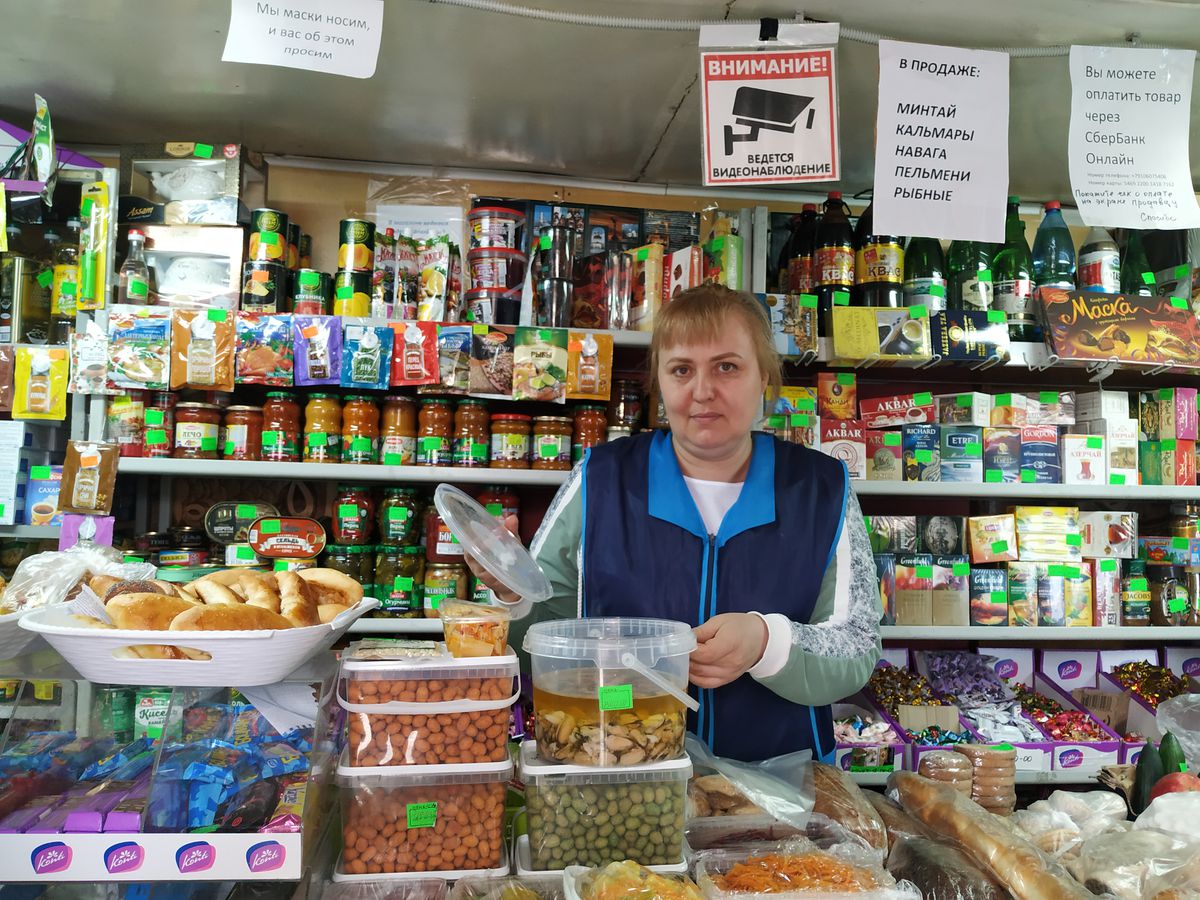 Elena Balzannikova’s new coffee machine makes delicious cappuccinos. But at his modest grocery store next to the Optina Pustyn monastery in the Russian city of Kozelsk, the glossy gray coffee pot, which figures prominently alongside sweets and candies, has yet to cause a stir. There is a trickle of customers, but the shopping is austere: a young man takes a packet of bagels and a small container of peach juice; a woman with her head covered, on the way to the Orthodox temple, asks for a packet of green tea. “Before the pandemic, people had more money and sales were better. Now, prices have risen a lot, but wages have not, ”laments Balzannikova, her hands stuffed into the pockets of her blue apron.

Behind the counter of her small business, which she took over after working as a clerk there for almost a decade, the 42-year-old small entrepreneur takes the temperature of Russia’s economy right. In the Eurasian country of 145 million inhabitants, inflation rose last year to 4.9%, far exceeding analysts’ expectations and driven by the pandemic, rising prices of essential goods and weakening ruble, says economics professor Alena Massarova. Food rose 6.7% on average in 2020, according to the state statistics agency Rosstat. And the pocketbook, especially that of the middle classes, who were beginning to have a mattress, notice it: an average Russian had at the end of 2020 11% less to spend than in 2013.

Although the Russian economy did not contract as much as others last year, during the COVID-19 pandemic, the impact adds to the effect of Western sanctions, the decline in foreign investment and the need for structural reforms to diversify what the expert Massarova defines as “the needle of resources”, with an economy highly dependent on hydrocarbons. The increase in the price of food and essential goods has been replicated in many other countries, the escalation is practically worldwide, but in Russia it is also a sensitive issue that leads a large part of society to the memory of the 1990s, after the collapse of the USSR, when the value of products was through the roof and the shelves of shops remained empty.

In fact, for 58% of Russians, this rise is the main problem in society, according to a recent survey by the Levada Center, the only independent in the country, which places the impoverishment of the population and corruption in second and third place. And financial problems and the awareness that the goal of raising the standard of living set by Russian President Vladimir Putin when he renewed his term in 2018 is increasingly far away, fuel pessimism, says sociologist Denis Volkov.

That social discontent, which leaked from the richest cities, such as Moscow and Saint Petersburg, to distant provinces, spurred protests last January in support of the opposition Alexei Navalni and worries the Kremlin, which is aware that it has spent less of its GDP than other industrialized countries in pandemic aid packages. However, it has chosen to shore up its national wealth fund, built in the good oil years and maintained through austerity measures, such as raising the retirement age, which caused major protests three years ago. However, says political scientist Tatyana Stanovaya, founder of the R. Politik think tank, Russians feel disconnected from a government that has a completely different agenda than their own and does not substantially associate problems such as inflation with politics. “It’s like they are politically depressed; and they feel that there are no alternatives to the current government, ”says Stanovaya.

The issue of prices and the financial situation of citizens is key and is expected to form the central core of Putin’s annual speech on the state of Russia given this Wednesday in the Federal Assembly. Already a few months ago, under the direct and televised indication of the Russian leader and with an eye to next autumn’s parliamentary elections, in which United Russia (the government party) arrives very touched according to the polls, the Russian Executive restricted exports of crops (bakery products are up 73%) and has regulated the price of some “socially significant goods”. On the list: sugar, which has soared 64.5%, or sunflower oil, which has risen 25.9%; well above the rate of inflation. The measure, however, does not finish convincing specialists such as Veronica Jolina, from the University of the Peoples of Russia, who highlights that it has caused the rise of other foods, such as margarine, frozen products or confectionery. “In addition, it is very likely to cause a shortage of some products,” warns the expert.

For the father Oleg Leonov, his wife, Olga Leonova and their four children between 15 and two years old, the orchard and a small farm allow them to resist firmly the onslaught of the crisis. On their plot in Kozelsk, surrounded by a white fence, they have goats, which give them milk, pigs and chickens. From a small wooden window that overlooks the corral, one of his middle-aged sons takes out a couple of eggs. They have fresh every day, a product that had already risen in recent years due to the avian flu epidemic and that in 2020 increased another 15%. Now it is, for many, a prohibitive product. Such as cucumbers (47.5% more in stores) – common in many Russian dishes – that the Leonov family has in a canning jar resting at the entrance of the home.

Father Oleg does not receive a salary from the Church, but it is the faithful of his parish in the Kaluga region (in the middle of the list of Russian regions in socio-economic indicators) who cover his salary with their contributions. What comes in is little, he says, so he complements it with another job: Masses in an Orthodox women’s convent. The family also receives allowances for each child (about 10,000 rubles a year) and for being a large family (about 8,000 rubles a month). “Good help,” says Leonova with satisfaction. He acknowledges, however, that things would be different if they were still in Moscow. There they could not afford music, gymnastics or drawing classes for children, which however in Kozelsk they have free, financed by the local administration.

People, says entrepreneur Balzannikova, are not up for any whim. In his shop he used to have “expensive teas”, Chinese Pu-erh, beautifully packaged that the faithful asked to give to the priests and monks of the monastery. He stopped bringing it because it was no longer bought. “Every ruble is counted and many people have to work in two or even three places to make ends meet,” says the saleswoman. She works as a manicurist when the shop closes, to supplement the 30,000 rubles (330 euros) that she earns per month and the 40,000 that her husband earns (about 440 euros, the average salary of the Kaluga region, southwest of Moscow, where she is Kozelsk), a worker in a furniture factory. They have a 15-year-old son.

Being forced to face some unforeseen expense terrifies Julia Rodina. A medical problem that he has to deal with in private, some school supplies for his two children, a problem with an electrical appliance. In her cozy kitchen on the apartment where she lives with her two children in a residential area in the city of Kaluga, with small blocks full of families, the vivacious 43-year-old accountant says she lost her job as head of a furniture retail chain on Last year, at the peak of the covid-19 pandemic, when unemployment rose from 4.7% to 6.3%. Then he worked for a few months as a taxi driver. Now, Rodina, who does not receive the pension established by her abusive husband or social coverage in a country where sexist violence is not criminalized with specific laws, has an income of about 27,000 rubles (290 euros) per month. Her purse shakes every time her five-year-old son, who loves dairy, asks for a yogurt; also with the university preparation courses for his daughter, who is 17, who has already had to leave English classes. The crisis has eaten away what little savings he had.

Perhaps as much as his financial situation worries him about a “possible war with Ukraine.” He says he has seen and read it in the Russian media. The Kremlin, which has mobilized a huge number of troops to its western borders and provoked the alert from the EU and NATO, continues to agitate the idea of ​​the external enemy and the threat of the Atlantic Alliance. One of his usual formulas to “try to consolidate” society around Putin and the government, says analyst Tatyana Stanovaya.

Despite everything, Rodina has “big little dreams”. How to convert your hobby sewing in a workshop business in Kaluga. And even expanding them to other parts of Russia and Europe: “It would be like a space for women, with a beauty salon, a clothing display; a place where they can come and chat, get their nails done. Sometimes miracles happen ”.