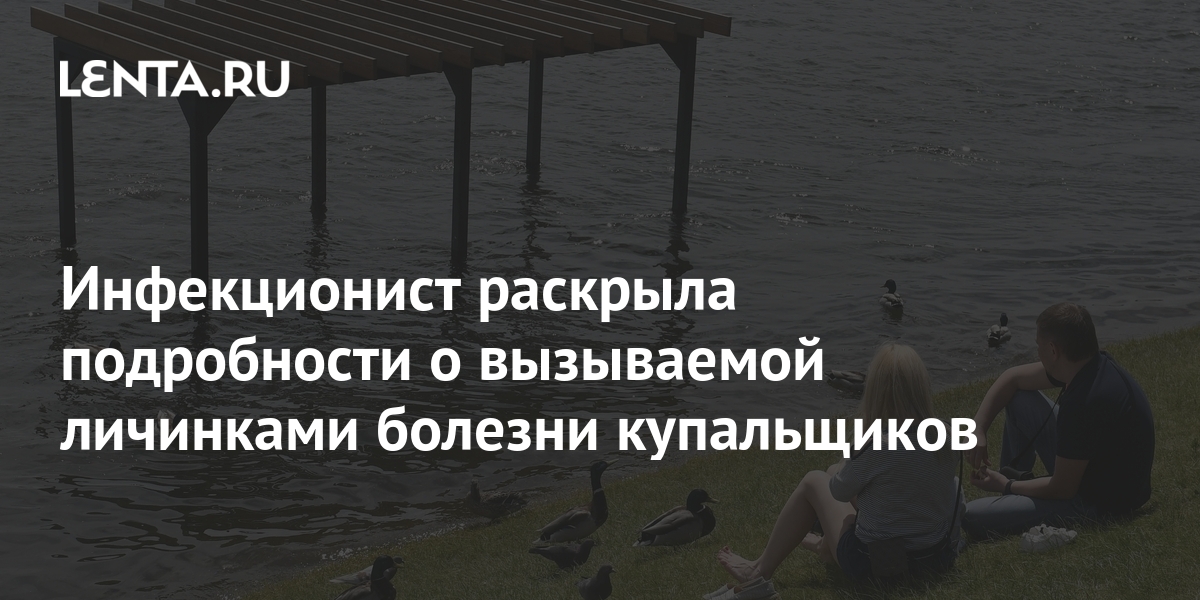 Natalya Senyagina, associate professor of the Department of Infectious Diseases at PIMU, warned Russians about cercariosis, better known as “bathers’ disease.” She revealed details about the illness to NN.ru.

The infectious disease specialist noted that cercariosis is an acute parasitic disease. It develops in people swimming in bodies of stagnant water.

It is caused by the larvae of the parasitic flatworms. With the feces of birds, their eggs enter the reservoir, from which the larvae are formed. They are embedded under the human skin, causing an acute allergic reaction, which is accompanied by the appearance of a rash and severe itching.

about the causes and symptoms of cercariasis

On July 2, it was reported that a serious surge in the incidence of cercariosis was recorded in the capital region. The Russians began to turn to dermatologists with complaints of itching, fever and blisters all over the body. It turned out that patients swam in bodies of stagnant water to escape the heat. Dermatologist Inna Petrosova noted that the culprits of the disease are cercariae – helminths living in the organisms of waterfowl and wading birds.

The Rosselkhoznadzor Administration for the Nizhny Novgorod Region and the Republic of Mari El will check the water bodies of the region due to cases of cercariosis. Nizhny Novgorod residents began to massively publish photos of the “consequences” of bathing on the Dredge Lake in the Avtozavodsky region, infectious disease doctors confirmed cases of cercariasis and more frequent treatment with symptoms.

The Veterinary Committee of the Nizhny Novgorod Region in connection with the identification of helminths of the Trematoda class, the Fasciolata detachment, the Echinostomatidae family June 30, 2021 issued an order to conduct surveys of the water bodies of the Nizhny Novgorod region with the development of an action plan for the prevention of echinostomatidosis of wild waterfowl

about the situation with cercariosis in the Nizhny Novgorod region

It is noted that the objects of research “were selected taking into account the parasitic situation and the possible spread of the disease.” Cases of cercariosis are associated with the heat that has been in the city for several days.

In addition, in the Chelyabinsk region, vacationers covered with a rash after swimming in Lake Turgoyak. According to the portal 74.ru, the tourists were covered with “red blisters like after a bite,” which itched. The Russians noted that small particles floated on the surface of the water, suggesting that “something is blooming” in the lake. The regional department of Rospotrebnadzor reported that water is being tested at three points for sanitary-chemical, microbiological and parasitological quality indicators, as well as sand samples in the recreation area for microbiological and parasitological indicators. However, the Deputy Minister of Ecology of the region Vitaly Bezrukov said that the rash is associated with “an allergic reaction to the bloom of blue-green algae and conifers with the release of pollen and its settling on the water surface.”

Professor of the Department of Dermatovenereology of the Russian Medical Academy of Postgraduate Education Yulia Gallyamova shared in an interview with Lente.ru how to avoid contracting cercariosis. She advised to choose the waters allowed for swimming, for example, the official beaches. “And avoid stagnant water, where there are few underwater currents and the water is not renewed,” Gallyamova recommended. According to her, antibiotics and antiparasitic drugs are most often prescribed for cercariosis.

You shouldn’t be scared here. But it is necessary to be treated, of course. Because any infection, despite the fact that it invades the skin and is in the skin, then gives deeper lesions and general symptoms

about the treatment of cercariasis

Last year, Mikhail Lebedev, an expert at the CMD Center for Molecular Diagnostics of the Central Research Institute of Epidemiology of Rospotrebnadzor, warned that sand on beaches near rivers and lakes could become a source of infection with various bacteria, microbes and parasites. According to him, cercariae more often live in stagnant water, and they can find themselves in the sea if it is polluted by domestic wastewater, or a river flows into it. The doctor added that due to the lack of disinfection, sand is considered a favorable breeding ground for microorganisms at a depth of five to six centimeters. At the same time, wet sand is especially dangerous, so the doctor advised not to bury yourself in the sand and build sand figures.