In the Province, the protest against the suspension of classes was with hugs to schools and protests in the streets 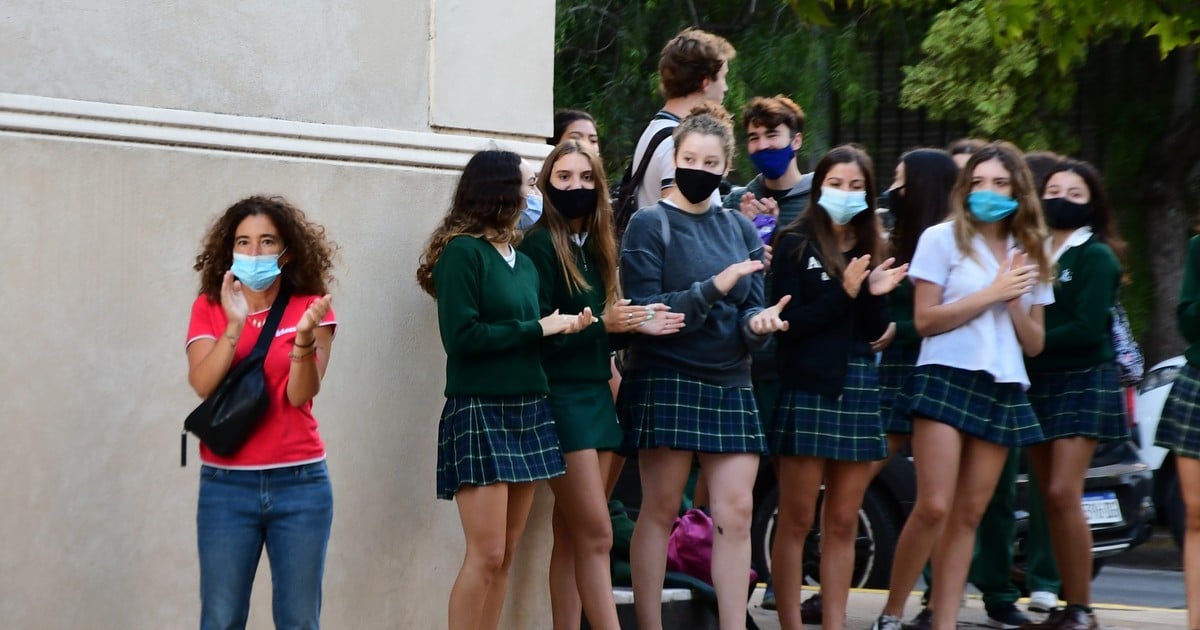 The virtuality and the closure of classrooms in the pandemic gave birth to a new actor in the educational system: organized parents that last year they demanded for the return to presence in the 2021 school year and are now protagonists of mobilizations and protests against the new suspension ordered by the Nation and the Province.

The key tool of this neo movement is the chains of whatsapp and social networks. Cell phones were on the red since last Friday and this Monday in more than a hundred schools in Greater Buenos Aires (where the ban is in force) organized symbolic hugs to establishments, contrary to the decree of the president Alberto Fernandez who suspended face-to-face classes for 15 days.

“Education must be an essential service” , was one of the slogans of the call to hold sittings and meetings in various Buenos Aires institutions. Scenes were seen in the north, west and south of the suburbs.

Most of the mobilizations were made in the morning shift. This happened in the institutes of San Isidro, Vicente López, San Miguel, Bernal, Quilmes and La Plata. In the Buenos Aires capital, families were present at the ESSERI headquarters, in Gonnet. That educational center had announced that it would open its doors and would ignore the government decision.

After they met other attempts of rebellion but they were buried by the threats of the direction of Schools: There was an intimation to the ESSERI and a summary to the Patris school, of City Bell for giving more than four hours of classes a day, something that is prohibited by the judicial plan.

In addition, from the organized Parents group, they called for a “silent sitting” surrounding the Quinta Presidencial de Olivos, contrary to the decision adopted by the National Government, within the framework of the new restrictions to stop the second wave of coronavirus infections.

However, the protesters concurred with banners and pans, to hold a loud protest in front of the presidential residence, which once again became the center of protests against the new restrictions.

I embrace the schools so that classes can return to the Santa Teresita school, by Vicente López. Photo MARCELO CARROLL.

Unlike what happens in the Buenos aires city, where a court ruling ordered to guarantee face-to-face classes, in Greater Buenos Aires they will remain closed at least until April 30. In another 100 municipalities that do not correspond to the AMBA and La Plata, the educational diagram continues.

From the collective “Organized Parents”, a group that was born in 2020 to demand the reopening of schools during the seven months of quarantine, they warned that they will continue with these types of protests until Governor Axel Kicillof opens the schools.

In Pilar, parents with their children decided to carry out a “flag” on one side of the Pan American in defense of education and against the closure of classrooms for 15 days.

The intervention of the families in these actions modified the scheme of the educational system. “For more than 20 years, the only ones who have raised questions about education are the teachers’ unions. The irruption of mothers and fathers modifies this scenario “, analyzed Guillermina Tiramointi, a specialist in pedagogical policies.

In the preparation of the protocols and the plan for the return to “safe classes” they had active participation of unions. In the case of Province, the Suteba led by Kirchner leader Roberto Baradel was one of those who most insisted on the need to return to virtuality. Even though in Buenos Aires more than half of the teachers are vaccinated, according to the Minister of Health, Daniel Gollán..

From the chambers of private schools they demonstrated against the closure and assured that there is no scientific evidence to support it, because the infections were very low in the classrooms.

On Sunday, Governor Kicillof warned schools not to comply with the measure. “If they violate the regulations , as it happens anywhere, and with common sense surely there will be some kind of sanction “he said in an interview on Rivadavia radio. On Monday on his Twitter account he wrote: “QI want to thank the entire educational community and families for the effort and commitment to carry out virtual classes at the AMBA for two weeks “.

According to official reports, between March 17 and April 12 only 0.71% were infected of the educational community, in line with the upward curve in the City.

We accompany parents, teachers and students, singing the Anthem and raising the flag to ask that the schools open.
There are 4 provinces that abide by the President’s DNU, denying the right to education. We will not allow the future to be stolen from our children and grandchildren. pic.twitter.com/gamHFFYNWZ

The opposition mayors also press to regain the presence of students. The mayor of Vicente López, Jorge Macri, said this Monday that he presented an amparo in the Federal Justice against the suspension of classes, but was denied, with which he will resort to the provincial Justice. His colleague from San Isidro, Gustavo Posse, and that from San Miguel, Jaime Méndez, had signed a decree declaring “essential service” to education.

Agustina Vila, Director General of Schools, clarified that “the management of sThe educational system in Buenos Aires is the responsibility of the Provincial Government. “At the headquarters of that organization there was also a protest by school transporters who demand that” classes cannot be suspended. “They kept the streets around the 13th and 56th building closed throughout the day.

Adif will give those affected compensation "to access temporary housing"